Russia Is Expanding Its Great-Power Project in the Middle East 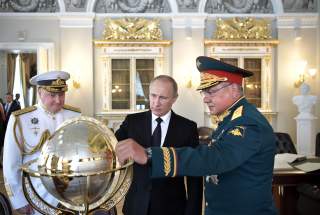 On October 5, 2017, Saudi Arabia’s King Salman arrived in Moscow. King Salman’s visit was met with great enthusiasm in Russia, as his arrival marked the first official visit of any Saudi monarch to Moscow and gave Moscow an opportunity to showcase its growing influence in the Middle East to the international community. The deals agreed between Moscow and Riyadh during King Salman’s trip encompassed a wide range of economic sectors. Russian president Vladimir Putin’s decision to sell Moscow’s prized S-400 air-defense system to Saudi Arabia was heralded as a new dawn in a bilateral relationship that has been severely strained ever since Moscow decided to intervene militarily on behalf of Syrian president Bashar al-Assad in September 2015.

As many Western journalists and geopolitical analysts who covered King Salman’s Russia trip focused principally on the transactional dimensions of the Moscow-Riyadh partnership, like arms sales and cooperation on oil prices, the implications of improved Russia-Saudi Arabia relations for Moscow’s broader Middle East strategy were alarmingly overlooked. This neglect is short sighted, as Moscow’s burgeoning partnership with Saudi Arabia symbolizes a sweeping transformation of Russia’s diplomatic conduct in the Middle East and strategic objectives in a critically important region of the world.

The transformative nature of Russia’s thaw in relations with Saudi Arabia can be partially explained by a shift in Moscow’s commitment to alignment with Riyadh. Even though Moscow and Riyadh have attempted to forge a durable economic and military partnership since the 1980s, the dialogue process that resulted in the latest thaw in Russia-Saudi Arabia relations is strikingly different from past diplomatic overtures. From the late Soviet-era onwards, Moscow’s overtures towards Saudi Arabia were largely bereft of broader strategic goals. Instead, Russian policymakers were focused on tactical matters, like gaining access to Saudi investment capital, forging lucrative arms contracts with the Gulf Cooperation Council, and ensuring that Riyadh’s links to Islamic extremist groups did not threaten Russia’s security.

The most recent thaw in relations between Russia and Saudi Arabia differs markedly from past tactical partnerships, because Putin has established a foundation for long-term diplomacy that extends beyond short-term material considerations. By refraining from announcing major economic deals with Saudi Arabia until agreements were struck with Riyadh on Assad’s retention of power in Syria and on oil production quotas, Putin successfully countered the Saudi monarchy’s long-standing perception of Russia as a mercenary state that can be manipulated through offers of hard currency. Russia’s willingness to demonstrate its commitment to cooperation with Saudi Arabia in the economic and security spheres also ameliorated the sense of betrayal in Riyadh that followed Moscow’s pro-Assad military collusion with Iran in September 2015.

The establishment of trust through diplomatic cooperation has also caused Russia and Saudi Arabia to no longer view each other as security threats. This newfound trust was exemplified by the Russian government’s favorable response to King Salman meeting separately with the presidents of Chechnya, Tatarstan and Ingushetia during his trip to Moscow. The Kremlin allowed the meetings to occur, as it was confident that Saudi Arabia would moderate the opinions of North Caucasus leaders with links to Sunni extremist movements.

Similarly, Saudi policymakers have not viewed Russia’s increased diplomatic involvement in Yemen as threatening, as Riyadh views Moscow as an impartial facilitator of dialogue between Saudi and Iran-aligned factions in the war-torn country. This mutual shift in perceptions suggests that the leaders of Russia and Saudi Arabia view their latest diplomatic thaw as a durable normalization, rather than a temporary entente driven by economic constraints or a desire for disentanglement from long-standing military engagements.

Russia’s decision to establish a long-term strategic partnership with Saudi Arabia also reveals radical changes in Moscow’s Middle East strategy. Since the start of the Arab Spring in 2011, Moscow’s strategic partnership with Iran and resolute support for the Tehran-aligned Assad regime in Syria have been cornerstones of Russia’s Middle East policy. Even though Russia-Iran cooperation has been effective in consolidating Assad’s position, there is a growing consensus amongst Kremlin policymakers that Russia’s partnership with Iran is fraught with too many internal tensions to extend beyond Syria. This assessment is exemplified by the stark contrast between Russia’s push for a diplomatic settlement in Syria and willingness to cooperate with Syrian Kurdish actors, and Iran’s hardline anti-Kurdish stance and continued support for a military solution to the Syrian civil war.

In response to growing discord with Iran over Syria, Moscow has adjusted its Middle East strategy by increasing its focus on diplomatic engagement with Sunni-Arab countries. This diplomatic realignment is aimed at ensuring that Moscow is not forced to withdraw from Middle East affairs once its military operations in Syria draw to a close. As Saudi Arabia is the most powerful Sunni-Arab country, Moscow views the establishment of a strategic partnership with Riyadh as an integral component of its new Middle East strategy.

The Russian government’s optimistic depiction of Putin’s meeting with King Salman suggests that Moscow has taken a major step forward in its quest for durable recognition as a great power in the Middle East. As Carnegie Moscow Center director Dmitri Trenin told me in a recent interview, a successful Russian rapprochement with Saudi Arabia that does not severely harm Moscow’s alignment with Tehran in Syria will allow Moscow to look like an “indifferent stakeholder” in the Middle East. In Trenin’s view, cultivating a perception of objectivity will increase Russia’s influence in the Middle East, much like Moscow’s attempts to balance between India and Pakistan have strengthened its geopolitical role in South Asia.

By maintaining favorable relations with Saudi Arabia and Iran during a period of unprecedented bilateral tensions between the two countries, Moscow will also be able to distinguish itself from the United States, which is viewed by large sections of the Arab public as a divisive force that seeks to exert its hegemonic power over the Middle East at any cost. By demonstrating that it can maintain constructive economic and security partnerships with Sunni states, Russia seeks to ensure that the diplomatic gains Moscow has accrued from its intervention in Syria will not diminish as soon as it militarily withdraws from the war-torn country.

In addition to ensuring that Russian influence in the Middle East outlasts Moscow’s military intervention in Syria, Russia seeks to use its strengthened partnership with Saudi Arabia to advance the cause of collective security in the Middle East. During my recent interview with Andrey Kortunov, Director General of the Russian International Affairs Council, Kortunov argued that Russia’s best option for durable leverage in the Middle East would be to facilitate the creation of an informal collective-security organization of Middle East states.

The foundation of this collective-security system would be issue-specific diplomatic cooperation. As Higher School of Economics professor Dmitry Suslov noted in our recent interview, Russia’s normalization of relations with Turkey and Saudi Arabia demonstrates that Moscow can collaborate with Middle East actors in some spheres, even if it is directly conflicting with the same countries in other spheres. As strategic partners in the Middle East frequently possess contradictory interests, Russia’s collective-security organization will focus on pinpointing selected areas of cooperation instead of trying to pressure states with a history of strained relations into transient alliances.

By limiting the mandate of a Russian-led collective security organization to promoting issue-specific cooperation, Moscow aims to present itself as a unifying force in the region rather than an external great power with hegemonic aspirations. Many Russian policymakers believe that Moscow’s ability to maintain favorable diplomatic relations with countries on both sides of the Sunni-Shia divide could make it an effective guarantor of collective security in the Middle East. As the Gulf Cooperation Council (GCC) struggles to contain the negative impact of a three-way power struggle between Saudi Arabia, Qatar and the United Arab Emirates (UAE), Russia’s outreach to Saudi Arabia can be viewed as a tentative first step towards reshaping the regional security order.

In order to ensure that Saudi Arabia and other Middle East states are willing to collaborate with Russia on preserving collective security in the Middle East, Moscow has been careful to emphasize that it does not seek to displace the United States as a great power in the Middle East. This contrasts markedly with Moscow’s zero-sum approach to the post-Soviet space. Russia’s willingness to sell Saudi Arabia sophisticated weaponry in spite of Riyadh’s simultaneous $15 billion deal with the United States on Terminal High Altitude Area Defense missile equipment unequivocally demonstrates that Moscow seeks to complement—rather than displace—Washington’s security initiatives in the Middle East.

Even though the durability of Russia’s new partnership with Saudi Arabia remains unclear, due to a long history of distrust between the two countries, it is clear that Russia’s latest diplomatic outreach to Saudi Arabia aims to create a more durable partnership than past efforts. If Russia-Saudi Arabia relations continue to improve in the months to come, Moscow’s goal of strengthening its alignment with Sunni states will come closer to fruition and Russia will consolidate its role as an indispensable guarantor of collective security in the Middle East.