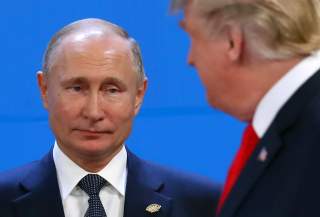 Let’s dispense with any talk that U.S.-Russia relations are on the verge of any reset. Yes, there were smiles when Secretary of State Mike Pompeo met with his Russian counterpart Sergei Lavrov and then with Russian president Vladimir Putin in Russia’s de facto southern capital of Sochi. There was the usual invocation of restarting channels of communication and seeking improvement in U.S.-Russia relations. But the meeting in Sochi achieved as much of substance as the first Ronald Reagan-Mikhail Gorbachev summit in 1985: that is to say, nothing. Now, as then, the only result is the promise of continuing to talk. Of course, as Winston Churchill once quipped, jaw-jaw is better than war-war. But it shows how far relations between both countries have deteriorated that simply agreeing to continue talking is seen as a breakthrough.

How the meeting was situated by the Russian side also speaks volumes. Pompeo had to join the queue. Lavrov received Iranian foreign minister Javad Zarif in Moscow last week, and, speaking of U.S. policy, declared, “Opting for a single approach of imposing one’s position onto everyone and everything is counterproductive.” Putin chose to receive in Sochi Chinese foreign minister Yang Wi ahead of the Pompeo visit—conveying symbolic equality of the visits of both China’s and America’s chief diplomats. Then Putin decided to fly to the Chkalov test center near Astrakhan accompanied by a squad of Russian stealth fighters to inspect new weapons systems, before making his way back for a meeting with Pompeo on his own schedule.

The underlying message is clear: Russia is not awed or intimidated by U.S. threats—and having seen growing gaps between statements and deeds (as well as contradictions in the messages presented by senior U.S. officials seemingly walked back or diluted by the president), Putin doesn’t appear to be worried that he continues to oppose U.S. preferences for Venezuela, Ukraine and the Middle East.

Instead, the Russian position remains consistent with previous messages: Russia wants to start the bargaining. What matters most to the United States—and more specifically the Trump administration—and what is on the table?

Sochi seems to suggest that the Kremlin may believe, more than two years after Trump took office, and now that the Mueller Report has been issued, that conditions may finally be in place to start the nineteenth-century-style “great power” talks that Russia has always hoped the United States would finally engage in. Does the Trump administration want a settlement in Venezuela? What guarantees are on the table for Russian interests and equities? Is a Ukraine-for-Venezuela swap in the realm of possibilities—a “you stay in your hemisphere, and we in ours” bargain? Can Russia bring Iran back to the nuclear negotiating table to start redoing the Iran deal so that the Trump administration can claim it is getting a “better” deal than the Obama administration? What’s being offered in terms of suspending or delaying U.S. sanctions? Does Trump want to see greater stability in global energy markets as a way to avoid delivering economic shocks to the U.S. economy already beginning to reel from coping with the uncertainties of the U.S.-China trade war?

Even the discrepancies in the White House and Kremlin read-outs as to whether Trump will meet with Putin at the G-20 reflect the start of this bargaining. Trump announced as a matter of course that he will meet with Putin (and Xi Jinping) on Monday; on Tuesday, the Russian side indicated that it is waiting for a formal request from the United States for a meeting. Moscow seems unwilling to give Trump the ability to scale up or down an encounter with Putin as nothing more than an informal chat or hallway encounter, particularly, since the precondition that Ukrainian sailors taken during last year’s Kerch Strait incident be released has not been met. The test is whether the American side will request a formal bilateral presidential meeting—and to make that request first. Lavrov made a point of noting that no such request had been received, but that Russia would consider it positively—if it were made. But if no such request is forthcoming, I do not foresee Putin making a request to have a formal encounter with the U.S. president, not when his own dance card at the G-20 in Japan is likely to be quite full.

Putin’s national security advisor Yuri Ushakov said that the Pompeo-Putin discussions had “not yielded any breakthrough, but had been held in a business-like atmosphere.” The question remains whether that atmosphere will persist, and what business is likely to be transacted.