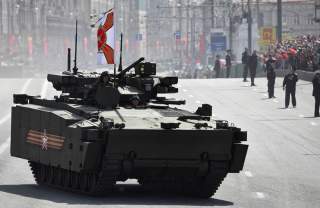 Russia’s new T-14 Armata was unveiled in 2015 to much fanfare in Russia and hand-wringing in the Western world. Much less attention has been paid to the new family of vehicles unveiled alongside it, the Kurganets-25. Compared to the T-14, the Kurganets’s features may seem more pedestrian: it represents Russia’s effort to upgrade its vast fleet of BMP infantry fighting vehicles to the level of protection offered by the American M2 Bradley or British Warrior. However, it does come with a new feature that its Western counterparts still lack.

When Russia unveiled the BMP-1 infantry fighting vehicle in a Moscow parade in 1967, it revolutionized mechanized warfare. Until then, armored personnel carriers were conceived of simply as battle taxis armed at best with a heavy machinegun. The BMP-1 came with a short-range antitank gun and a long-range missile launcher—the little beasts could in theory take out main battle tanks! The consensus was the Soviet Union had stolen a technological march on the West, which began busily developing so-called Infantry Fighting Vehicles (IFVs) of its own.

The BMP-1, however, did not distinguish itself in combat. Its weapon systems sounded good on paper, but proved dysfunctional, and ill suited for use against infantry. The BMP-1’s armor was also too thin—it was getting holed up by .50 caliber machine-gun fire—and conditions for transported infantry were abominable. In 1980, the BMP-2 was introduced, with a thirty-millimeter autocannon—a much more practical weapon for engaging infantry threats—as well as an improved AT-4 missile launcher and modestly upgraded armor.

In the 1980s, Western counterparts to the BMP all came out; they had similar armaments to the BMP-2, but were all heavier. Twice as heavy, in the case of the American Bradley IFV, and much of that weight was put into armor. The autocannons on Western IFVs could make swiss cheese out of thin-skinned BMP-1s and -2s, while the BMP-2’s autocannon would struggle to penetrate the frontal armor in return.

Soviet industry was focused on fielding vast swarms of BMPs to be thrust into an enormous tank war in Central Europe. A tank’s main gun would kill a Bradley as easily as a BMP, so why bother with a few extra centimeters of armor? Just be happy the armor stops rifle bullets, comrade!

Instead of massive tank battles, however, IFVs were called upon to fight in numerous low-intensity conflicts following the end of the Cold War in which force protection was a priority. Even Western IFVs had their armor upgraded so that they had a chance to survive hits from rocket-propelled grenades . . . and the autocannons on BMPs.

Russia’s next tracked IFV, however, was developed in a different direction: the BMP-3 added a hundred-millimeter low-velocity gun in addition to a thirty-millimeter autocannon, making it to the most heavily armed IFV in the world. However, protection was only a little improved. The BMP-3 got some export orders, but the design was not widely imitated.

Russia has announced it intends to replace 70 percent of its Cold War inventory of armored fighting vehicles by 2020. While the current budgetary constraints will slow down this transition, the overall vision is clear: T-72s will be replaced with T-14 Armatas, BTR wheeled APCs will be replaced by new Bumerangs, and BMPs will be replaced by Kurganetses. Russia will also add a new class of T-15 “Heavy APCs,” based on the Armata chassis, operated by the mechanized infantry units in tank brigades. Heavy APCs—personnel carriers with protection levels close or equal to those of a main battle tank—are rare around the world, but the Israeli Namer heavy APC, based on the Merkava tank, has made a good reputation for itself.

The Kurganets-25 represents Russia’s attempt to get onto the same page as the latest Western IFVs, with an emphasis on crew protection. It uses an entirely new hull intended to serve for a family of new vehicles.

Compared to the BMP, the Kurganets is larger and heavier—in fact, at 27.5 tons, it approaches the weight of the thirty-ton Bradley! Although precise armor values are unknown, it’s still thought to lag a bit behind the Bradley in terms of armor, but not nearly as much as before. However, the modular armor system is supposed to allow upgraded armor protection if desired.

The Kurganets-25 comes in two variants: an APC and IFV version. Let’s focus on the IFV first, which is a clear successor of the BMP line of vehicles.

The Kurganets IFV has an unmanned Bumerang turret—the same as on the Bumerang wheeled APC—mounting the 2A42 thirty-millimeter autocannon also used on the BMP-2 and -3. Two AT-14 Kornet EM antitank missiles are mounted on each side of the turret. The Kornet enjoys a fearsome reputation for its proven ability to penetrate the heavy armor of Abrams and Merkava tanks. The EM version is fire-and-forget, and can even be salvo fired, either at separate targets, or to “double tap” the same one to overwhelm defensive systems. There is also the usual coaxial 7.62-millimeter PKT machine gun in the turret.

The Kornet EM, in particular, appears superior to the TOW-2A missiles on the Bradley, which require the vehicle to remain fixed in position while the firer guides the missile to its target—it also reportedly penetrates more armor. Whether it outperforms the wireless, top-attack TOW-2B is less clear.

The Kurganets’s most radical feature is the incorporation of the Afganit Active Protection system used on the T-14 tank. The Afganit employs multiple AESA radars to detect incoming shells and missiles, to which it responds with “soft-kill” multispectral smoke grenades to confuse approaching missiles as well as shooting “hard-kill” rockets from up to sixteen tubes on the hall to intercept the approaching rounds.

Israel has already had success with the Trophy Active Protection System in 2014. The Afganit system has not yet been tested in combat, but if it is anywhere as effective as Trophy, it may represent one of the best methods yet for protecting an IFV without drastically increasing the weight with additional armor. Of course, Active Protection Systems are most effective against rockets and missiles—their potential versus kinetic penetrators (i.e., cannons) will be more limited. But in low-intensity conflicts, infantry armed with rockets and missiles weapons are far more common threats.

Kurganets comes with the full array of expected modern sensors and systems: GPS, laser range finder, thermal imager, active-search fire-control system, exterior cameras for situational awareness and networked weapons controls. The controls are reportedly modeled after a PlayStation controller in order to aid in the familiarization of new recruits and avoid steering wheel–related injuries. There is also an infrared spotlight that some speculate doubles as a decoy for heat-seeking missiles.

Passenger capacity, however, is down to a six- or seven-man squad. This is surprising, as the limited squad size imposed by earlier IFV designs has been frequently criticized and is an obvious point of potential improvement. A six-man squad can have a hard time performing common “infantry tasks” such as securing and assaulting a building. However, the Kurganets’s interior is reportedly roomier and more comfortable for passengers—if true, this would mark a true revolution in Russian AFV design!

Dismounting is done via a rear ramp with a built in door, a major improvement over the roof-mounted exit hatches used to initiate dismounting in BMPs—those were the opposite of “safe and fast.”

The Kurganets also ditches the infantry firing ports found on earlier version of both the BMP and Bradley. Allowing infantry to shoot from the vehicles was a cool-sounding idea revealed to be largely impractical, and it’s no surprise that feature was finally done away with.

The Kurganets APC variant is armed only with a remotely operated 12.7-millimeter machine gun. It can carry up to eight dismounts, but lacks the active-protection system of the IFV. The APC version is curious: it has fallen out of fashion to use heavy tracked vehicles as mere “battle taxis,” as the tracks wear out more quickly than wheels. It seems like a role Russia’s large fleet of wheeled armored personnel carriers could better fulfill.

The Kurganets is also intended to replace the ubiquitous MT-LB, an unglamorous but handy tracked weapons carrier adapted into a wide variety of roles.

The Kurganets is no superweapon—but it does indicate a major Russian effort to bring its mechanized fleet up to contemporary standards and keep its soldiers alive. Its incorporation of an Active Protection System and superior antitank missiles are both capability upgrades that other IFV operators will be compelled to match.