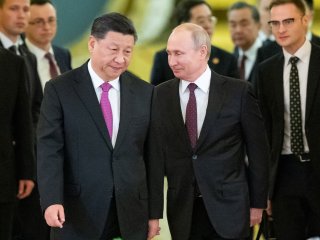 In Washington and European capitals, two linked narratives about Russia are gaining popularity. One is that Russia is a waning power, defanged and unlikely to cause significant trouble. The other narrative is that this weakening Russia could and should be convinced to join the transatlantic community as part of a larger coalition to effectively counter China. Both narratives are delusional. Rather than lose precious time trying to convince fence-sitters in Continental Europe otherwise, President Biden should leave a legacy of resolute cooperation against Putin and Xi. To do so, he can convene democratic allies from Europe to the Pacific who are ready to respond to Moscow’s and Beijing’s authoritarian ambitions abroad.

Russia is not a power in atrophy. With over $600 billion in foreign exchange reserves and a federal budget revenue/spending spread of $248/$284 billion in 2021-2023, Russia is well-resourced to project power in its theaters of interest. And given the long runway that green energy needs, global demand for oil and gas will not diminish dramatically anytime soon. As the world’s population and the global economy continue to grow, the Kremlin will have plenty of rubles in its coffers to realize its agenda abroad for the foreseeable future.

Nor is there evidence that Putin cares much about the costs associated with Russia’s military adventures in Georgia, Ukraine, Syria, Libya, and the Central African Republic. Sanctions imposed by the U.S. and the EU in the wake of Russia’s occupation of Crimea and eastern Ukraine sting, but overall, Moscow has borne them well enough. And who needs Brussels when you can be friends with the likes of Viktor Orban, Bashar Al-Asad, and Aleksandar Vucic? The Kremlin has plenty in its rogues’ gallery to do its bidding.

But decisionmakers in Washington, Paris, Berlin, and elsewhere are ignoring these realities as they embrace the “Russia waning” narrative to justify a strategy to work with Putin because Xi is the greater danger.

And the People’s Republic of China is indeed the bigger threat. Its exceedingly gross disregard for global norms in governance and trade, abject disregard for the fundamental human rights of its citizens, and its contempt for Taiwanese sovereignty, all gravely threaten a world order that has brought mankind unprecedented security and prosperity. But teaming up with Moloch to defeat Satan is unnecessary.

Moscow and Beijing are presently in a marriage of convenience. Both wish to see the U.S. sufficiently weakened; whatever is “bad” for America – be it our divided society, latent disputes with our European allies, or a weakened will to engage globally as the superpower we are – is “good” as far as Putin and Xi are concerned.

Yet the presence of a common enemy is an insufficient basis for a genuine alliance: Russian and Chinese foreign policy agendas are ultimately incompatible. Moscow remains apprehensive of China’s economic incursions into its far east, well recalling the war that nearly erupted between the two communist powers in 1969. In Europe, Russia persistently promotes instability in the Western Balkans and elsewhere to undermine European integration and transatlantic institutions; China, on the other hand, needs stability to successfully roll its Silk Road Economic Belt into the EU marketplace. And in the horrific event of a live war between China and the U.S. and its allies in the Pacific or elsewhere, the U.S. should have no worries that the Russian people will sacrifice their youth for the sake of Beijing.

Much wiser would be for the West to leave Russia and China to stew in their own mutual incompatibility. Sooner or later, they’ll hand the world an updated edition of the Sino-Soviet split, which could incentivize Russia to take a lesson from the Sino-American rapprochement of 1972.

In the meantime, the Biden administration would be wise to convene allies to both contain China and thwart Russian adventurism around the world. The U.S. should assemble a distinct group of democratic states comprising our British, Pacific, Central European, and Baltic allies. This partnership – anchored in both common interests and shared values – could more rapidly and precisely react to the coercive interventions, political deceptions, and potential military aggressions emanating from autocratic China and Russia.

A broad democratic consensus on the threats that Putin’s Russia and Xi’s China pose is presently elusive. There seems to be an almost willful ignorance of what history has shown. Whether imperial, Soviet, or contemporary, Russia has never sought anything but hegemonic dominance in its near abroad. And while Chinese ambitions of regional hegemony are illusory at present, ambitions of a Sino-centric sphere of influence are another matter.

Time is of the essence. Russian and Chinese disinformation operations, economic coercion, and diplomatic and military bullying effectively coerces some actors to work contrary to U.S. national security and economic interests. Weakening their autocratic influence becomes significantly more challenging the longer it persists. The sooner we take targeted, responsive actions with like-minded allies in Europe and the Pacific, the stronger we stand.

Reuf Bajrovic is the Co-Chair of the US-Europe Alliance. Richard Kraemer is the USEA Board President and Director of the Western Balkans program at the European Values Center for Security Policy.