Russia Isn't Going Away in Ukraine 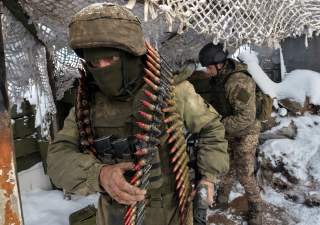 The North Korea situation seems to bring U.S. national security “back to the future,” inviting Americans to seriously contemplate the prospect of nuclear war for the first time in decades. That is regrettable, and this writer has spent more than a few late nights and some long transpacific plane rides puzzling for a solution. However, the sad truth is that the unfolding situation in Ukraine is actually no less dangerous. In fact, one could plausibly argue that is even more dangerous for three salient reasons:

2 - People are dying every day in the proxy war in eastern Ukraine and that dynamic dramatically inflames nationalist impulses on both sides.

The point here is not to simply rehash what is well known. Everyone, for instance, knows by now that George Kennan, one of America’s most famous diplomats and foreign policy thinkers of the twentieth century, starkly warned against NATO expansion in the 1990s (and he was hardly alone), but successive U.S. administrations pressed ahead anyways. There is no point, moreover, in reviewing the tragic events of the Maidan, and how European and American diplomats such as then Assistant Secretary of State Victoria Nuland foolishly overplayed the delicate political crisis in Kiev in 2013–14, prompting the Russian countermove against Crimea and igniting the outbreak of a destructive civil war. At least President Barack Obama was subsequently wise enough to admit that the United States had virtually no options to respond when confronting Russia’s “core interests,” as explained in his seminal 2016 foreign policy-focused interview that appeared in The Atlantic.

The simmering conflict in eastern Ukraine is the continuing legacy of these reckless moves, and any glimmers of hope that the Trump administration might bring the region’s suffering to an end with a creative peace plan has all but dissipated. The bizarre, half-cocked debate about Russian influence in the United States over the last year has been almost entirely undertaken by people who know nothing about Russia—with several bright and reasonable exceptions on this valued forum. To help slightly even the score, this new column will take a close look at new and relevant Russian-language writings: in this case a November 2017 survey of the Ukraine situation appearing in the Russian newspaper Military Review [Военное обозрение].

The article describes the late October 2017 bombings of a gas pipeline, a gas distribution station and nearby power lines in Crimea that are said to have cut off gas and electricity to 3,000 residents. An incident along the border in August 2016, in which two Russian officers were killed, and yet another in November 2016 when two Russian Army soldiers were detained, are also discussed. The author asks pointedly: “Is this not military aggression that needs to be answered by force?” [Это ли не военная агрессия, которую необходимо было пресечь силовым путём?] The article notes that Ukrainian saboteurs have been detained carrying bags full with “magnetic and contact mines, fuses, TNT, and grenades.” No mention is made of possible acts of sabotage against Ukraine by Russian agents. Alleging a link to Western intelligence organizations, the author of this Russian analysis suggests that the Ukrainian saboteurs regularly have their knowledge updated by overseas “colleagues.”

Albeit with a few caveats, moreover, this piece is actually rather harsh on President Vladimir Putin. He criticizes Russia’s leadership as “… too eager to position ourselves as the heralds of peaceful methods,” [… мы снова утёрлись позиционируя себя глашатаями мирных методов урегулирования конфликтов] and that the “lack of proper response at the operational-tactical level … is quite capable of leading to the continuation of subversive actions in the Republic of Crimea.” While still willing to say that the “very mild statement by President Putin … [was] well thought out,” [продуманное] this Russian strategist is nevertheless quite clear that he opposes the “excessively gentle attitude of our state towards Ukrainian terrorist tricks.”

The analysis also presents an outraged reaction to intensified artillery bombardment in the vicinity of Donetsk. The article suggests that Ukrainian authorities have now put into place 250–350 large artillery pieces and draws a comparison between this deployment and the threat that North Korean artillery poses against Seoul. According to the Russian analysis: “serious exchanges of fire that end tragically for our citizens are tolerated by the ‘Minsk Accord’…” [серьёзные пограничные огневые контакты, заканчивающиеся для наших граждан трагически, соблюдаем минский формат]. A stark warning follows that Russian airpower in the Southern Military District would be quite sufficient, assisted by both Iskander and Kalibr missile strikes, “to completely destroy most active artillery positions.” For good measure, it is added that Russian forces have had recent practice with these methods in Syria.

In this bleak Russian vision: “… their foreign sponsors [of the Kiev leadership] have definitively decided to use Ukraine in the final position … as the springboard for maintaining a long-term situation of escalation along our western borders.” [их ‘заокеанские хозяева’ уже окончательно определились с последним предназначением Украины … в качестве плацдарма для поддержания долговременной эскалационной обстановки у наших западных границ.] Indeed, Kiev is said to be “filled with American intelligence officers,” and, not surprisingly, this author has more than a few impolite comments regarding the Trump administration’s Special Representative for Ukraine Kurt Volker, who is described as “the author of numerous Russophobic comments,” and a “pupil of [Senator John] McCain.” It is assessed in this Russian analysis that in the context of the American push for transferring lethal arms to Ukraine and “large scale escalation in the Donbass theater” that Volker’s proposal to develop a peacekeeping mission for Eastern Ukraine can only be a “some kind of very unpleasant trick” [какой-то очень неприятный подвох]. The piece concludes by fretting that the American president is weak and may be forced to seek a military solution for the Donbass, even as “all the internal and external enemies of Russia begin to raise their heads” during the spring of 2018.

Some American readers will no doubt be inclined to dismiss such writings as those of a raving Russian militarist. However, that would be unwise, since these sentiments likely are quite reflective of Moscow’s national security elite and so are ignored at our collective peril. As a window into that line of thinking, this piece may indeed suggest that, even as Putin is viewed as a hard-liner by most in the West, he is quite likely under considerable pressure from Russian nationalists to escalate and even resolve the entire Ukraine situation by force. No doubt such an outcome would be a full on disaster for Ukraine, Russia and Europe too. But with no hint of a thaw in the new Cold War, the Kremlin may indeed be reviewing all its options.

Seventy-five years ago this winter, the Red Army surrounded and destroyed the German Wehrmacht’s vaunted Sixth Army. By killing, wounding or capturing almost half a million Nazi soldiers in the grand pincer movement, Russian armies dealt Hitler a blow that his war machine could never recover from. Indeed, if that Russian victory had not occurred, there is a considerable chance we would all be speaking German now—at least those of us not sent to the gas chambers. For that moment—one of the most extraordinary turning points in modern world history—we still owe Moscow the benefit of the doubt regarding Russia’s national security.

It is well past time that Washington put aside tendencies toward global rivalry and escalatory maneuvers to search for pragmatic solutions that could end the suffering of the people in eastern Ukraine and thus begin to stabilize the whole dangerously creaking construct of European security.