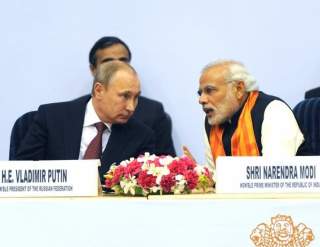 News that Russia is strengthening its air and missile defenses in the Baltic, Crimea and Far East—and Russia’s wish to preserve its global status—suggest that its dismissal of its so-called “pivot” to Asia should be taken seriously by the United States and its NATO allies. And some widespread assumptions about that pivot having taken place after the imposition of western sanctions on Russia for invading and dismembering Ukraine in 2014 do not stand up to scrutiny.

As a unique country in terms of geopolitical location (according to the Kremlin) and as a Eurasian power, Russia cannot turn to only one side.

But the Asia-Pacific is a high Russian priority, and Moscow sees good prospects for cooperation with countries in this region. At the same time, Russia hopes to get back to business as usual with the EU.

Russia’s keenness to remain a major world influence is reflected in its attempts to strengthen its ties with many countries in the Asia-Pacific. But Russia has shrugged off talk about its strategic turn to the East—and not without reason. Russia’s deployment of missiles in the Baltic, Crimea and Russian Far East, and its current interests in West Asia, Europe, the Asia-Pacific and the Arctic, show that it is testing the ground—or trying to gain military ground—on four sides, as it were.

Militarily, Russia’s presence in the Asia-Pacific predates Ukraine in 2014. Russia’s Pacific Fleet, one of its most powerful naval forces, and its possession of the Kurils, which is contested by Japan, testify to its long-held position as a Pacific power.

But the only Russian base in the Asia-Pacific is in Vietnam.

Given its own Eurasian location Russia’s bases in Kazakhstan, Kyrgyzstan and Tajikistan hardly reflect an eastward—or even an Asian—pivot. Military bases in Belarus, Moldova (in the partially recognized state of Transnistria) and Crimea reflect a turn to Europe, and the Middle Eastern base in Syria a westward turn. Bases in Armenia and South Ossetia lie immediately to the south of Russia. None of this amounts to a “pivot” to the Asia-Pacific.

Russian and Chinese Interests Do Not Always Coincide

On the economic front, President Vladimir Putin’s keenness to persuade foreign investors to develop the Russian Far East was obvious from the early days of his presidency in 2000. Russia has welcomed Chinese investment in the subregion. At another level, 2014’s famous $400 billion Sino-Russian gas deal had been under negotiation for more than a decade, which hardly suggests the quick turn on a central point implied by the term “pivot.” Moreover, China overtook Germany as Russia’s largest trading partner in 2010.

At another level, the Russia-China economic relationship has not been trouble-free. Trade between Russia and China has actually decreased from $88.8 billion in 2013 (pre-Ukraine) to $61.4 billion in 2015. This is not much more than Sino-Russian trade in 2010, and a great deal less than the $100 billion that the two countries had hoped for last year. And after a brief interlude that lasted barely two years, Saudi Arabia has reportedly displaced Russia as China’s largest oil supplier.

Additionally, different mindsets block the development of joint Sino-Russian ventures in the Russian Far East. China holds that the majority of the obstacles are created by Russian bureaucracy, outdated legislative and administrative mechanisms, and the lack of thinking in market terms.

Putin accepts that the United States is the world’s only superpower, but what unites China and Russia is their wish to challenge the United States’ global power. China, especially, challenges America’s primacy in Asia. Neither Russia nor China has many friends. So they can be useful to each other at the global level. That is one reason for their opposition to the deployment of American THAAD missiles in South Korea. Russia has not opposed China’s attempts to rebalance power in the South China Sea and has supported the Chinese stance that disputes over its international waters should be settled bilaterally. But it does not want to get involved in the South China Sea.

Moscow also has to take care that any perceived new closeness to Beijing does not alienate some ASEAN countries with whom it seeks to expand its ties—even if Russia has a long way to go to increase its influence in the ASEAN area. Russia has been trying to strengthen those ties since 2011 (pre-Ukraine), through cooperation on counterterrorism and by offering some ASEAN member states arms and energy. Russia is pushing sales of arms to countries that are threatened by China’s saber-rattling and expansionist aims in the South China Sea. Russia is already Vietnam’s main arms supplier. Arms deals with Vietnam show that Russia will not sacrifice defense relationships with countries that contest China’s claims to parts of the South China Sea. However, the planned sales of matériel to Vietnam and Laos will not change the strategic equation in Asia.

Recently Russian warships took part in a major international naval drill (which included the United States) in Brunei and another one in Indonesia.

But compared to Europe (remember the buildup near Ukraine?), the Asia-Pacific appears to be a strategic diversion for Moscow, a political stage on which it cannot play the lead.

What about trade? In 2015, ASEAN-Russia commerce was less than 1 percent of the group’s total trade. Russian investment barely registers in ASEAN statistics, and is falling.

At the ASEAN-Russia summit in Sochi last May, ASEAN countries said they would consider Russia’s proposal for a “comprehensive” free-trade agreement between ASEAN and the Eurasian Economic Union, a single market with a gross domestic product of about $4 trillion.

The Sochi Declaration signals the interest of both ASEAN and Russia to forge greater cooperation, but it does not mean that Russia will become a strategic partner with ASEAN. Russia’s own mismanaged economy hardly sets an example to aspiring Asian economic tigers.

Generally Russia is an economic lightweight in the Asia-Pacific, so it cannot compete strongly with the United States and China in the ASEAN region. At the same time, Moscow’s ties with Beijing could block its path to closeness with China’s fearful neighbors. Currently, Russia is juggling several balls in Asia, unable to catch even one.

The simple facts are that Russia’s interest in Asia stems from an overriding desire to expand its own influence there—not to help China to establish primacy in the region—even while Russia resents America’s military preeminence in the Asia-Pacific. But Putin has yet to attend an East Asia Summit, the principal security forum that is attended by regional heads of state.

As for Central Asia, in May 2015 China and Russia pledged to harmonize work of the Russian-fostered Eurasian Economic Union and China’s Silk Road. But that goal is not the end-all for either country. For instance, China is not enthused by Russia’s wish to include India, Pakistan and Iran in the EEU. Incapable of exporting much more than arms and energy, Russia cannot offer its Central Asian neighbors more investment than China—but they would also like to diversify their economic ties by examining the possibility of of cooperation with India and Iran, among other countries. However, the crucial point is that Russia’s historical political and military clout over the region remains unchallenged by China.

It is unsurprising that Russian foreign minister Sergey Lavrov, trying to paper over the cracks in the troubled Sino-Russian relationship, says two things in the same breath: claiming that the current level of Sino-Russian relations is “the highest in historical perspective,” while admitting that there is no consensus on many issues. That absence of a China-Russia consensus on many Asian issues suggests that they do not pose a major threat to the United States in Asia—even if they would like to curb its influence there.

Perhaps strategic issues count the most. With NATO and Russia seeing each other as their biggest threats, Russian security forces are concentrated in Europe and are being strengthened against NATO.

Strategic interests themselves are the primary definition of any “pivot,” and Russia’s economic and military ties with Asian countries are weak. Even that old economic-military druzhba-dosti (friendship) with India has been replaced by deepening Indian economic and military ties with the United States on India’s side and Russian arms sales to India’s neighboring foes—China and Pakistan—on the other.

All told, the Asia-Pacific looks like an afterthought, a secondary priority to a Russia that wishes to enhance its global prestige. The reality is that strategic and economic interests are likely to keep Russia focused in Europe even as Moscow attempts to develop ties with countries in the Asia-Pacific.

Anita Inder Singh is a Visiting Professor at the Centre for Peace and Conflict Resolution in New Delhi.