Russia Knows Its Next Move in Syria. Does America? 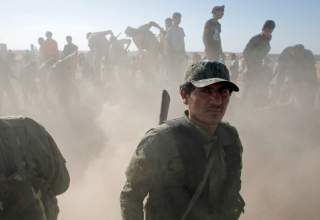 The endgame has begun in Syria’s long and bloody civil war. As the grip of the Islamic State on the territories it has controlled in eastern Syria and western Iraq is pried up, there is no longer any way the question of Syria’s future can be postponed. Moreover, given the competing and clashes interests of the various major players in the Syrian conflict, major clashes are now inevitable unless some sort of agreement can be worked out.

When the Russians intervened in force in Syria in 2015 to support the Syrian regime of Bashar al-Assad and add significant firepower to aid the Syrian ground forces—backed up by Hezbollah and Iranian Revolutionary Guards—the initial goal was to stabilize Assad’s control over the rump Syria that he presided over and to avoid the spectacle of Assad’s ouster from Damascus. The goal was to produce a stalemate where Assad, on the one hand, could not be forced “to go,” and where the backers of different parts of the Syrian opposition—Turkey, Qatar, Saudi Arabia and even the United States—would shift from regime change to deal making along the lines of a “soft partition” for Syria.

When this was not forthcoming, Moscow moved to the the next stage: the recovery of Aleppo—Syria’s second-largest city—for Assad. to see which rebel groups in western Syria could be co-opted and which ones would receive the full force of the Syrian-Iranian-Russian juggernaut. That phase of the operation was wrapped up by December 2016, accompanied by intensive Russian diplomatic efforts, notably with Turkey, to accommodate their interests and to set up a series of exclusion zones and safe areas.

The greater-than-expected success of these efforts has meant that, for the first time since the fighting began, the Syrian army now has the ability to dispatch more units and firepower to those territories in the eastern part of the country, and for Assad to make his bid for regaining control over several other key pieces of territory, to re-establish direct lines of land communication with his allies in Iraq and Iran, and to retake at least a portion of Syria’s oil industry—which, over the last several years, had provided a critical and lucrative stream of revenue for the Islamic State. A key strategic goal of Iran is also served by these developments: the restoration of a secure land bridge from Iran (through Iraq) into Syria, from there to the Shia enclaves in Lebanon and thus to the shores of the Mediterranean.

The losers in these developments have been those Sunni opposition groups that were counting on taking control of eastern Syria after the defeat of the Islamic State in order to create a secure base for the opposition and to improve their strategic position in the ongoing yet often fruitless dialogue on a political settlement for Syria. For Syria’s Kurds, who have used the civil war to create a de facto autonomous region in the north, partnering with the United States to serve as America’s most reliable on-the-ground proxies in the fight against the Islamic State while observing a de facto cease-fire with the Syrian regime, the revival of Assad’s fortunes may require a re-evaluation of the Kurdish relationship with Damascus and whether to abandon the rest of the Syrian opposition.

Developments over the last six months seemed to spell the complete failure of the Obama administration’s approach to Syria: the gamble that the United States could knit together a coalition of groups in Syria that could both eliminate the Islamic State and remove Assad from power, with minimal involvement and risk to the United States, can now be said to have failed. The Trump administration has yet to develop its own cohesive strategy on Syria. Instead, it has articulated a series of somewhat contradictory preferences (being open to cooperating with Russia in battling ISIS, yet committed to retarding the growth of Iranian influence and endorsing Saudi preferences for the region), coupled with a desire to show that the Trump team would enforce Barack Obama’s red lines on any chemical-weapons use with a military response, and a growing predilection to define and defend an emerging territorial zone in parts of Syria controlled by the opposition against any Syrian regime incursion. But without a clearly defined understanding of U.S. interests in Syria, the risk grows that the United States will stumble into a clash with Syria, Russia and Iran. We have already had two shots across the bow this past week—the downing first of a Syrian fighter-bomber and then an Iranian drone—over eastern Syria.

Such a development might not be unwelcome to significant parts of the U.S. foreign-policy establishment, but, as with the progress of new sanctions legislation against Russia, there appears to have been no preparation for dealing with the second- and third-order effects, or how the United States would cope with escalatory behavior on the part of Damascus, Tehran or Moscow. At the same time, the channels through which Moscow and Washington might be able to communicate on the Syria question, as well as other festering issues, have been blocked, first by the toxic atmosphere in Washington, where any meeting with the Russians is labelled as treasonous, and now by a Russian sense that such encounters are a waste of time because no serious bargaining can take place—as witnessed by the cancellation of the visit of Tom Shannon to confer with Sergei Ryabkov. In addition, any U.S.-Russia rupture takes place against the backdrop of the Qatar crisis, which is destabilizing the U.S. security structure for the Persian Gulf—which means that key U.S. allies starting with Qatar and Turkey may no longer automatically be in the American camp if the Syria situation flares up.

What does the president want to see happen in Syria? And what price is he willing to pay to achieve it? And what set of circumstances, even if not optimal, is tolerable? Six months into the new administration, we don’t have a clear or consistent answer.

Meanwhile, Iran, Syria and Russia are moving ahead with the third stage of their operation. If the success of that offensive directly and negatively impacts U.S. interests, we seem to have neither the diplomatic leverage to halt it, but haven’t made clear the extent to which we will commit to deter it. Out of that continued uncertainty runs the risk of an accident, the consequences of which no one seems prepared for.