Russia May Make Another Power Play in South America 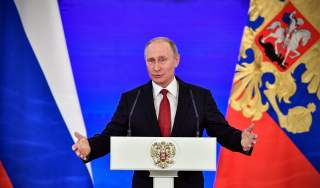 Russian president Vladimir Putin will travel to Bolivia to attend the fourth Gas Exporting Countries Forum summit, which will take place on November 20–24. This is President Putin’s first trip to the landlocked nation, and while Russia-Bolivia relations are not as researched and discussed as Moscow’s relations with Nicaragua or Venezuela, they are nevertheless worth discussing in depth.

In late October, the Bolivian daily El Deber quoted Russian ambassador to Bolivia Vladimir Sprinchan about a meeting he held with Bolivian authorities regarding President Putin’s upcoming visit. The Russian diplomat explained that “we analyzed different issues as Bolivia is a partner of Russia and we have a lot of common views, we have the same ideology, and that is very important.” Indeed, on 24 October, the Russian Federation used its veto power to block a resolution in the United Nations Security Council (UNSC) to “extend for one year the work of international inspectors investigating chemical-weapons attacks in Syria.” Bolivia, currently a rotating member of the UNSC, also voted against the resolution.

Apart from diplomatic support, Bolivia-Russia relations revolve around energy initiatives. For example, Russian energy giant Gazprom operates in Bolivia, dating back to a 2007 memorandum of understanding with the Bolivian state-owned petroleum company Yacimientos Petrolíferos Fiscales Bolivianos. Gazprom started production on the Incahuasi field in 2016, has scheduled drilling in the Azero block for 2018 and has expressed interest in expanding its Bolivian operations even further. The Russian energy giant is apparently interested in drilling for hydrocarbons in La Ceiba, Vitiacua and Madidi. Furthermore, a October 6 Gazprom press release notes that the two sides have the “intention to set up a joint venture for gas marketing in Argentina and Brazil.” While it is debatable whether this will actually occur, such ambitious projects stress the close ties between Gazprom and Bolivia these days.

Even more, the Bolivian Nuclear Energy Agency (ABEN) and the Russian energy company (ROSATOM) signed a contract for the construction of a nuclear research and technology center (NRTC) last September. According to a statement by ROSATOM, the NRTC to be located in the Bolivian city of El Alto will comprise of a water-cooled research reactor, a multipurpose experimental gamma-installation center, engineering facilities and various laboratories. Investments in the project will reportedly amount to more than $300 million and the first facilities should be commissioned in 2019. ROSATOM is also increasing ties with Bolivia’s Higher University of San Andres.

As for potential projects that may materialize when President Putin visits, weapons sales are the most likely. According to the renowned Jane’s, the commander of the Bolivian air force has recommended that La Paz acquire Russian Yakovlev Yak-130 “Mitten” light-attack aircraft to replace the service’s Lockheed T-33s. While Bolivia’s defense budget is not as large as Venezuela’s, the country is fertile ground for Russian weapons exports. Afterall, President Morales has strived to modernize his nation’s military and has carried out interesting acquisitions recently, including a radar system from Thales and Super Puma helicopters from Airbus. There have not been major Russian-Bolivian weapons sales recently, but the two governments did sign a defense cooperation agreement back in August, which can be seen as the first step by Moscow for larger weapons transfers to Bolivia.

The media coverage of the upcoming Gas Exporting Countries Forum summit will understandably center on the decisions of the twelve-member bloc regarding gas production. Nevertheless, it is also important to monitor meetings between the attending delegations and any potential bilateral projects that could come out of them. So far, in spite of ideological ties, Bolivia-Russia ties have been limited, with a strong focus on energy initiatives, but that also means that there is plenty of space for growth.

W. Alejandro Sanchez is an analyst that focuses on geopolitical and defense related affairs, with a focus on the Western Hemisphere. His analyses have appeared in numerous refereed journals including Small Wars and Insurgencies, Defence Studies, the Journal of Slavic Military Studies, European Security, Studies in Conflict and Terrorism and Perspectivas. Follow him on twitter: @W_Alex_Sanchez

The views presented in this article are the author’s own and do not necessarily reflect those of any institutions with which the author is associated.