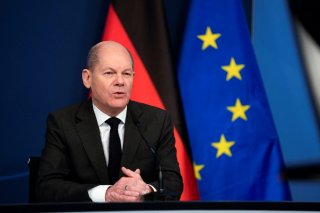 Germany’s new government is under fire for its Russia policy during one of the worst crises in European security since the Balkan wars. Recent signals coming out of Berlin on sanctions and defensive weapon deliveries created confusion across the Atlantic, threatening to upend a unified response to a Russian incursion into Ukraine. Is Germany reverting to its weaker stance on Russia from before the country invaded Ukraine in 2014? Or, even worse, is Germany returning to its historical Mittellage, moving to the middle between Moscow and Washington?

But it’s too early and too counterproductive to write off Berlin and jump to the conclusion that Germany looks East rather than West. Germany’s position in Europe and NATO is critical. Every effort now should be made to reinforce a unified front and pressure Berlin to do more than the bare minimum. The questions around Germany’s role require swift and strong answers from Germany’s new leaders. Otherwise, these questions will turn to fears, legitimizing impressions that Germany is a weak ally and exaggerations that it is abandoning the transatlantic alliance altogether.

Both NATO secretary-general Jens Stoltenberg and U.S. secretary of state Antony Blinken traveled to Berlin to scrutinize Germany’s position and shore up the ally’s support. That’s because the status quo is confusing. An array of messaging came from German officials comprising its multiparty government, making it difficult to distinguish which voices represent Germany’s official position and which are a confusing casualty of coalition governance. For the first time in the country’s history, Germany is governed by a three-party coalition. There is political infighting both within and between the governing parties. For example, the left-wing of the Social Democratic Party (SDP), which has been traditionally softer on Russia, has become stronger in recent years; whereas the Greens have come a long way from their pacifist roots to their more pragmatist positions of today. The coalition agreement outlining the government’s policies only papered over points of contention, resulting in a lot of confusion over internal dynamics within the new government.

However, Germany’s SDP chancellor, Olaf Scholz, as well as its Green foreign minister, Annalena Baerbock, both explicitly underscored that all options are on the table in reaction to a Russian escalation. That includes ending the controversial Nord Stream 2 natural gas pipeline with Russia. Unfortunately, the German chancellor had been silent for too long while some members of his own party have created confusion within the alliance, undermining confidence at a time when it is absolutely critical. As a result, this skepticism still persists. Berlin will have to deliver on its promise to put Nord Stream 2 on the table in the case of any Russian escalation—even if it hurts Germany’s economic and energy interests.

Finding the right answer on arms transfers is more difficult, as Berlin perceives these types of transfers as contributing to escalation rather than to deterrence. Germany even reportedly prevented another ally, Estonia, from sending arms support to Ukraine if the weapons they’re sending were made in Germany. However, this is perhaps not the area where Germany’s biggest contribution is needed at the moment; instead, Germany should do its bit for security policy by engaging in reassurance measures for NATO allies in the east—alongside a strong sanctions response.

Despite all the criticism, there is no indication that Germany wants to be responsible for fracturing the U.S.-led approach. French president Emmanuel Macron’s European-centric proposal to resolve the crisis has gone unanswered by Berlin. And Germany’s efforts within the Normandy format (of Ukraine, Russia, Germany, and France) are not a sign of German appeasement or some German-French effort to split the alliance. Germany sees it as a diplomatic necessity to bring Russia back to the negotiation table and away from military escalation. Not because this format or similar agreements have been particularly successful in the past, but because every effort that prevents or delays Russia from intervening in Ukraine is worth pursuing.

If anything, Russia’s first intervention in 2014 demonstrated how Putin’s behavior can catalyze a significant shift in German policy and the perception of Russia. Germany under the leadership of Angela Merkel broke with its old “Ostpolitik” paradigm and shepherded Europe toward a common sanctions policy toward Russia. It did this in lockstep with the United States. Furthermore, it became a lead nation for NATO’s battlegroup in Lithuania. It wasn’t just Merkel’s Christian Democratic Union, but the SPD’s Frank-Walter Steinmeier that had a significant change of heart on how to engage Russia. This gives reason for optimism that Germany will come along.

Germany has a long way to go to take on the leadership role in Europe that it so successfully assumed seven years ago. An honest initial assessment of Germany’s response to the most significant European security crisis in decades is sobering. But the jury is still out regarding Berlin’s performance in the long run. The new government has already tried hard to course correct on sanctions messaging. Much more will be required in the coming days. Chancellor Scholz’s visit to Washington next week will provide a critical opportunity to further clarify and demonstrate Germany’s commitment to a unified transatlantic approach.

Liana Fix is a Resident Fellow at The German Marshall Fund of the United States.

Steven Keil is a Fellow in Security and Defense Policy at The German Marshall Fund of the United States.