Russia Is Not the Soviet Union 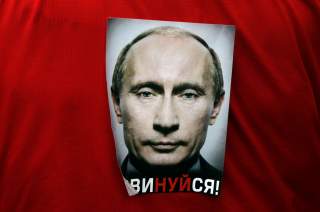 The American public and U.S. policymakers both have an unfortunate tendency to conflate Russia with the Soviet Union. That habit emerged again with the media and political reaction to the Helsinki summit between President Trump and Russian President Vladimir Putin. Trump’s critics accused him of appeasing Putin and even of committing treason for not doing enough to defend American interests and for being far too solicitous to the Russian leader. They regarded that as an unforgivable offense because Russia supposedly poses a dire threat to the United States. Hostile pundits and politicians charged that Moscow’s alleged interference in the 2016 U.S. elections constituted an attack on America akin to Pearl Harbor and 9-11.

Trump’s supplicant behavior, opponents contended, stood in shameful contrast to the behavior of previous presidents toward tyrants, especially toward the Kremlin’s threats to America and the West. They trotted out Ronald Reagan’s “evil empire” speech and his later demand that Mikhail Gorbachev to tear down the Berlin Wall as examples of how Trump should have acted.

The problem with citing such examples is that they applied to a different country: the Soviet Union. Too many Americans act as though there is no meaningful difference between that entity and Russia. Worse still, U.S. leaders have embraced the same kind of uncompromising, hostile policies that Washington pursued to contain Soviet power. It is a major blunder that has increasingly poisoned relations with Moscow since the demise of the Union of Soviet Socialist Republics (USSR) at the end of 1991.

One obvious difference between the Soviet Union and Russia is that the Soviet governing elite embraced Marxism-Leninism and its objective of world revolution. Today’s Russia is not a messianic power. Its economic system is a rather mundane variety of corrupt crony capitalism, not rigid state socialism. The political system is a conservative autocracy with aspects of a rigged democracy, not a one-party dictatorship that brooks no dissent whatsoever.

Russia is hardly a Western-style democracy, but neither is it a continuation of the Soviet Union’s horrifically brutal totalitarianism. Indeed, the country’s political and social philosophy is quite different from that of its predecessor. For example, the Orthodox Church had no meaningful influence during the Soviet era—something that was unsurprising, given communism’s official policy of atheism. But today, the Orthodox Church has a considerable influence in Putin’s Russia, especially on social issues.

The bottom line is that Russia is a conventional, somewhat conservative, power, whereas the Soviet Union was a messianic, totalitarian power. That’s a rather large and significant difference, and U.S. policy needs to reflect that realization.

An equally crucial difference is that the Soviet Union was a global power (and, for a time, arguably a superpower) with global ambitions and capabilities to match. It controlled an empire in Eastern Europe and cultivated allies and clients around the world, including in such far-flung places as Cuba, Vietnam, and Angola. The USSR also intensely contested the United States for influence in all of those areas. Conversely, Russia is merely a regional power with very limited extra-regional reach. The Kremlin’s ambitions are focused heavily on the near abroad, aimed at trying to block the eastward creep of the North Atlantic Treaty Organization (NATO) and the U.S.-led intrusion into Russia’s core security zone. The orientation seems far more defensive than offensive.

It would be difficult for Russia to execute anything more than a very geographically limited expansionist agenda, even if it has one. The Soviet Union was the world’s number two economic power, second only to the United States. Russia has an economy roughly the size of Canada’s and is no longer ranked even in the global top ten. It also has only three-quarters of the Soviet Union’s territory (much of which is nearly-empty Siberia) and barely half the population of the old USSR. If that were not enough, that population is shrinking and is afflicted with an assortment of public health problems (especially rampant alcoholism).

All of these factors should make it evident that Russia is not a credible rival, much less an existential threat, to the United States and its democratic system. Russia's power is a pale shadow of the Soviet Union's. The only undiminished source of clout is the country's sizeable nuclear arsenal. But while nuclear weapons are the ultimate deterrent, they are not very useful for power projection or warfighting, unless the political leadership wants to risk national suicide. And there is no evidence whatsoever that Putin and his oligarch backers are suicidal. Quite the contrary, they seem wedded to accumulating ever greater wealth and perks.

Finally, Russia’s security interests actually overlap substantially with America’s—most notably regarding the desire to combat radical Islamic terrorism. If U.S. leaders did not insist on pursuing provocative policies, such as expanding NATO to Russia’s border, undermining longtime Russian clients in the Balkans (Serbia) and the Middle East (Syria), and excluding Russia from key international economic institutions such as the G-7, there would be relatively few occasions when vital American and Russian interests collide.

A fundamental shift in U.S. policy is needed, but that requires a major change in America's national psychology. For more than four decades, Americans saw (and were told to regard) the Soviet Union as a mortal threat to the nation's security and its most cherished values of freedom and democracy. Unfortunately, a mental reset did not take place when the USSR dissolved, and a quasi-democratic Russia emerged as one of the successor states. Too many Americans (including political leaders and policymakers) act as though they are still confronting the Soviet Union. It will be the ultimate tragic irony if, having avoided war with a totalitarian global adversary, America now stumbles into war because of an out-of-date image of, and policy toward, a conventional, declining regional power. Yet unless U.S. leaders change both their mindsets and their policies toward Russia, that outcome is a very real possibility.

Image: A participant wears a sticker with the word "Obey!" during an opposition protest on Revolution square in central Moscow February 26, 2012. Thousands of Russians joined hands to form a ring around Moscow city centre on Sunday in protest against Vladimir Putin's likely return as president in an election next week. REUTERS/Denis Sinyakov (RUSSIA - Tags: CIVIL UNREST ELECTIONS POLITICS)