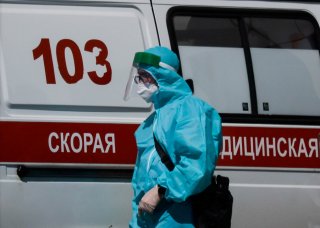 Joe Biden and Vladimir Putin may have walked away from their Geneva Summit with very few tangible accomplishments. But Putin has reaped at least one political benefit from his trip to Switzerland: He is insulated from the repercussions of Moscow’s unpopular decision to make coronavirus vaccines mandatory for the working population.

Moscow Mayor Sergey Sobyanin announced on Wednesday that workers in the service, education, healthcare, and entertainment sectors will now be required to get fully vaccinated before August 15th. Those who do not comply risk being suspended from their jobs or refused admission to educational institutions, although exceptions can be made for medical reasons. The decision comes as coronavirus infections surged to four-month highs and available beds become increasingly difficult to find. Moscow and the surrounding metropolitan area account for twenty million people, only fourteen percent of whom have been vaccinated. Only ten percent of Russians nationwide have received their jabs, a shockingly low number for a country in which vaccines are both abundant and free, and which was the first to approve a coronavirus vaccine.

The early, perhaps premature approval of Russia’s Sputnik V vaccine in August 2020 likely contributed to Russians’ lack of trust in the shot. Although an independent review of the data conducted by The Lancet in February 2021 showed Sputnik V to be 91.6% effective at preventing infection and 100% effective at preventing severe illness and death, at the time of the vaccine’s approval not undergone sufficient clinical trials for scientists to be confident in its safety and efficacy. In addition, high levels of vaccine disinformation and a general distrust for the Russian healthcare system that dates back to the Soviet period have also contributed to fears about vaccine safety. A poll conducted by the Levada Center found that sixty-two percent of respondents did not want to be vaccinated, with hesitancy highest amongst people aged eighteen to twenty-four.

The timing of Sobyanin’s announcement was likely not coincidental. Because it was made while Putin was otherwise occupied, he can hardly be responsible for the fallout. Moreover, Putin has spoken publicly about his opposition to mandatory vaccination. Instead, he is on record saying that such a move would be ‘counterproductive’ and that people should see the value in getting vaccinated on their own. Putin’s own vaccination was conducted out of the public eye in a move that diverged from many other world leaders who were vaccinated publicly in order to increase confidence in coronavirus vaccination.

But while Putin plays good cop, his deputies play the bad. Sobyanin has long been a voice for robust public health measures and has repeatedly expressed frustration at Russia’s fragmented coronavirus response.

“It’s up to everybody whether they get vaccinated or not. But it is a personal matter only as long as you sit at home. When you go out and come into contact with other people, you are an accomplice of the epidemiological process — a chain in the link spreading this dangerous virus,” Sobyanin said in his statement.

Former Prime Minister Dimitry Medvedev has also thrown his support behind the vaccine mandate. On the question of individual choice vs. collective wellbeing, Putin and his deputies have taken opposite stances. This could be viewed as a two-pronged approach designed to maximize vaccination levels with a combination of carrots and sticks. Alternatively, the Russian government’s irresoluteness when it comes to instituting coronavirus restrictions and voicing support for public health measures may have contributed to the lack of confidence in their three vaccines.

Moscow is not the only region of Russia experimenting with mandatory vaccination. Yakutia, a region in Northeast Siberia has also implemented a controversial mandatory vaccination policy that holds employers financially responsible if their employees don’t agree to get vaccinated. In Moscow as well, employers have been entrusted with ensuring that at least sixty percent of their employees get the vaccine. In this sense, the responsibility for Russia’s vaccination campaign has been outsourced twice, first to the governors and mayors, and then to state and private enterprise.

While the consequences for refusing the vaccine are high on both a personal and public health level, for those who are deeply opposed there remain some pathways out. Employers are responsible for sixty percent vaccination, but it’s possible to insist on a place in the remaining forty. Some reports have emerged of an alarming workaround in which the vaccine-hesitant can purchase vaccine certificates on the black market for between 10,000 and 20,000 rubles, or $137-$275. The contents of the vaccine are then poured out and the unvaccinated customer is entered into a national database of supposedly vaccinated people.

Will Moscow’s vaccine mandate improve health outcomes by providing incentives to get vaccinated (or disincentives not to)? Or will it frustrate vaccination efforts by encouraging the purchase of black-market vaccine certificates and obscuring vaccination data?

Lillian Posner is an assistant managing editor at The National Interest. She tweets @LillianPosner