Is Russia Poised to Invade Ukraine? 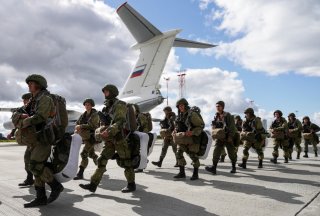 The United States is increasingly concerned by a large buildup of Russian military forces along the border with Ukraine. Secretary of State Antony Blinken has publicly warned Moscow against launching military operations against Ukraine, American officials have briefed NATO allies about these concerns, and CIA director Bill Burns reportedly raised the matter with Kremlin officials during recent talks in Moscow. Is Russia preparing for a large-scale invasion of Ukraine? What factors might affect prospects for war? And how should the United States and Europe deal with this danger?

The Center for The National Interest brought together an all-star panel of experts on Friday, November 19 for a discussion of these important questions:

Melinda Haring is a Deputy Director of the Atlantic Council’s Eurasia Center and former editor of its UkraineAlert publication. She is the vice-chair of the board of the East Europe Foundation in Kyiv, a member of the supervisory board of the Right to Protection NGO in Ukraine, and a senior fellow at the Foreign Policy Research Institute.

Dmitry Suslov is Deputy Director of the Centre for Comprehensive European and International Studies and Senior Lecturer at the National Research University Higher School of Economics in Russia. He is the author of numerous publications on US-Russian relations and changes in the world order.

Jacob HeiIbrunn, editor of The National Interest, moderated the discussion.