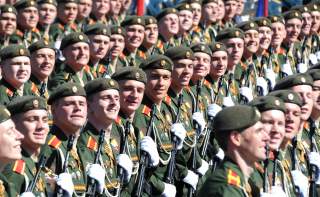 Donald Trump just received his latest orders from Vladimir Putin—one could be forgiven for thinking this is what happened after last Saturday’s phone call, given some of the recent headlines: “The Budding Resemblance Between Putin and Trump,” “Trump’s Putin Bromance Is Making Americans Pro-Russian,” and “How Much Does Trump Love Putin?”

The politicization of Russian influence has unfortunately created misperceptions about how and to what extent Russia threatens American interests. The American people must take a moment and ensure they are not fearing Russia more than is necessary. This is important because misperception can have grave consequences: distraction from other more serious threats, limited geostrategic maneuverability and potential future conflict.

A quick skim of the headlines will show that Russia is the United States’ latest foreign-policy villain. Its hacking of the Democratic National Convention last year was proof it poses a national-security threat. And the awareness of this threat is not new—there have been government investigations since early last year into Russia’s interference in American politics, and specifically its support of the Trump campaign.

Not surprisingly, Russia is viewed with particular suspicion on the political left. At the Women’s March and subsequent demonstrations, protesters waved a variety of signs claiming Trump is a Putin stooge. “Twinkle, Twinkle, Little Czar, Putin Made You What You Are.” “Say No to Putin’s Puppet!”

The truth of the matter, though, is that although Russia does present a threat, that threat has been greatly exaggerated by domestic political mudslinging.

Think back to mid-2016. At that time, it was becoming apparent—dreadfully so to the Democrats—that Trump might actually win the election. One of the main ways in which Trump was beating Hillary Clinton was with his “America first” rhetoric. According to him, Hillary and the Obama administration she worked for gave birth to ISIS, were responsible for the Benghazi attacks, were letting China take advantage of the United States and were allowing Latin American immigrants to hurt the economy. Trump furthermore accused Hillary of being influenced by foreign powers via the Clinton Foundation. These claims convinced many Americans that Trump was the right man to protect the country in an increasingly dangerous world.

It was also true that Russian interference in American politics was becoming more of a concern at this time. Although not widely reported until mid-June, the DNC became aware of Russia-linked hacking a few months earlier. Putin had already shown his preference for Trump over Hillary.

As is natural for a politician of her abilities, Hillary realized Trump’s murky Russian connections were good debate fodder. During the first debate, she made good use of this material: “There’s no doubt now that Russia has used cyberattacks against all kinds of organizations in our country, and I am deeply concerned about this. I know Donald’s very praiseworthy of Vladimir Putin.”

She painted Russia as a threat, implying that Moscow was insidiously using Trump as a twenty-first-century Manchurian candidate. It was cringeworthy when Hillary did this. To put it bluntly, she realized xenophobia sells.

Why does all this matter? Because it means both the public and the government agencies that investigate national-security threats—remember, those agencies’ members are part of the public, too—have a heightened focus on Russia that is not entirely the result of sober analysis. Campaign politics, hilarious memes and a good number of conspiracy theories have made people more certain than they should be about the severity of the Russian threat.

Being overly afraid of Russia is a problem for three reasons. First, it is dangerous because it is distracting. Public fixation may cause reallocation of limited government resources towards a threat of perceived importance, at the expense of detecting other threats. The reallocation of resources is happening now, as evidenced by the House Select Intelligence Committee’s recent decision to look into Russian influence in the election.

While Russia poses a serious espionage threat to the United States, it is just one of many national-security concerns. Putting too much effort into watching for a Russian hack might prevent government agencies from detecting other threats. The consequences of such cognitive bias are not without precedent. In the 1980s, for instance, when the Cold War was still on and the Soviet Union presented the primary foreign-policy threat to the United States, an American intelligence officer named Jonathan Pollard spied on the United States on behalf of Israel, an allied country. He was sentenced to life imprisonment, but not before spying for five years.

Second, public hostility to Russia limits Washington’s ability to take a flexible approach to Moscow. This is precisely the trap that Barack Obama fell into: when Russia becomes defined as a bad actor, it is difficult to work with it precisely when the United States needs to the most. Escalating tensions with Russia hamstring the United States on a variety of fronts. If Washington plans to address Venezuela’s instability or China’s behavior in the South China Sea, it is better to approach Russia as a potential partner. Russia has a unique opportunity to prevent the United States from taking action in many parts of the world, and it persistently challenges American initiatives to force its way to the negotiating table.

Finally, fear can be a precursor to war, even though at present that seems unlikely. Fear makes Americans forget that Russia is full of people just like them. The leaders of feared countries—such as Putin—are thought of as dangerous monsters, and this cognitive bias distorts threat perceptions and strategic decisionmaking. Remember 9/11? Remember the irrational linkages between Al Qaeda and Saddam Hussein? Remember the yellowcake that proved the United States needed to act?

Of course, there are a few factors in play that limit the likelihood of full-blown conflict between the United States and Russia anytime soon. One important one is that Trump does not seem responsive to public or even congressional sentiment about Russia. Another is that Russia is cautiously optimistic about bilateral relations under Trump. Despite this, it must not be forgotten that antagonism still increases the likelihood of eventual conflict. As disagreements with China over maritime sovereignty in Asia show, the more that harsh words are exchanged, the more explosive confrontations become.

In the United States, focus on particular foreign villains quickly rises and falls, often with little sensible explanation. Why were Iraq, China and now Russia major national-security concerns? Why is the American public no longer focused on Iran and North Korea? Why has there been little concerted effort in combating threats closer to home, like transnational crime groups in Central America, or an imploding Venezuela? The fact is that public fixation is mercurial, and largely reactive. It is furthermore often distorted by domestic debates unrelated to the threats themselves.

The American public is absolutely allowed to fear Russia and characterize it as a national-security threat. But it had best think before doing so.

Nicholas Borroz is a Washington, DC–based strategic intelligence consultant. He provides guidance on reputational, compliance and political risk in emerging markets. Nicholas has published in the New York Times, Nikkei Asian Review, Foreign Policy, War on the Rocks and in many other forums. He holds a master's degree in international economics from the Johns Hopkins School of Advanced International Studies.