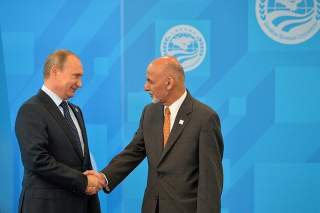 Russia is a great power that retains muscle memory (and a strategic arsenal) from its past superpowerdom. In the Ukraine and Syria, Russia has challenged the United States—its former peer and a hesitant hegemon in decline—through direct military interventions. Additionally, Moscow has impressively deployed hybrid warfare tactics to create the perception that it has influenced the U.S. presidential election and forged a rift between the incoming commander-in-chief and elements of the U.S. intelligence community.

Surprisingly, Afghanistan is emerging as another arena in which Moscow is pointedly working at odds with Washington’s interests. Indeed, recent moves by Russia now represent a pivot toward Afghanistan, posing a set of challenges that have been unanticipated by U.S. observers of the region. The incoming Trump Administration ought to be aware of Russia’s newfound assertiveness vis-à-vis Afghanistan, both in the threats it poses as well as the potential opportunities it may present.

A Russian About-Face in Afghanistan

In late December, Moscow hosted a trilateral dialogue with Beijing and Islamabad on the future of Afghanistan. Importantly, left out of the talks were Kabul, Washington and New Delhi—a historic Russian ally now moving closer to the United States. The joint statement released after the dialogue expressed support for talks with the Afghan Taliban and concern over the spread of Islamic State.

The Russo-Sino-Pak trilateral did not emerge out of thin air. It is the latest in a series of Russian efforts to engage both Islamabad and the Afghan Taliban. Together, these moves mark a definitive departure from Moscow’s decades-old policy toward the region. Pakistan was a strong U.S. ally during most of the Cold War, while the Soviet Union had a defense pact with the nominally non-aligned India. After the Soviet invasion of Afghanistan, Pakistan, in concert with the United States, helped make Afghanistan a graveyard for the Red Army, forcing its withdrawal. Over the 1990s, Moscow, in concert with New Delhi and Tehran, supported the Northern Alliance against groups backed by Pakistan and Saudi Arabia—first, Gulbuddin Hekmatyar’s Hezb-i Islami (HIG) and then the Afghan Taliban.

After 9/11, Moscow supported the U.S.-led coalition in Afghanistan, which ousted the Taliban and brought back to power elements of the Northern Alliance that Russia had supported. The post-9/11 Afghan war and broader global war on terror also gave Moscow space to brutally crush the Chechen insurgency, which had been taken over by Salafi jihadists after Russia sidelined Chechen Sufi separatists. Russia also provided diplomatic and logistical support for a sizable U.S. military presence in its backyard. From 2009 into 2015, Russia served as a supply route for U.S. and NATO forces through what was known as the Northern Distribution Network (NDN), which lessened Washington’s dependence on Islamabad for the Pakistan-based ground lines of communication into Afghanistan.

Moscow’s relations with Washington have taken a turn for the worse since 2014, following the Russian intervention in the Ukraine. In the same year, U.S. combat operations in Afghanistan came to an end without having meaningfully weakened the Afghan Taliban. Moscow has had to contend with the reality that there are insufficient U.S. and NATO troops to defeat the Taliban, but still a troubling number of residual Western forces too close to home in its strategic backyard. Additionally, as the Taliban resurges, Islamic State has developed an embryonic presence along the Afghanistan-Pakistan border. Russia has legitimate fears about the group using Afghanistan to establish networks nearby in Central Asia. Meanwhile, opium production in Afghanistan continues at near-record levels, which severely impacts Russia as it is both a transit route for Europe-bound Afghan opiates and a major consumer market. Russia consumes around a fifth of the world’s illegal opiate supply and is afflicted by a heroin addiction epidemic.

It is in this context that, last year, Moscow has stepped up its engagement with the Afghan Taliban. Communication between Russia and the Taliban, according to unnamed Taliban officials, goes back to 2007, but outreach appears to have not only intensified last year, it may have also grown to material support for the militant group. An unnamed Taliban commander told the AFP that Russia aided the insurgent group’s takeover of Kunduz this past fall. Additionally, Moscow is also reportedly hindering the implementation of a peace deal between Kabul and HIG, which hardliners in the Afghan Taliban have opposed.

These latter two developments beget two questions. If Russia supports a negotiated settlement to the conflict in Afghanistan, why is blocking a deal that, if successful, could provide a model for a future settlement with the Taliban? And if Moscow is indeed providing lethal support to the Afghan Taliban, are its objectives merely to curry favor with the group and counter Islamic State?

Russian concerns clearly go beyond Islamic State and the drug trade. It sees the residual U.S. presence in Afghanistan as a latent threat. In a lengthy interview with Turkey’s Andalou Agency, Ambassador Zamir Kabulov, Russia’s top Afghanistan hand, expressed concern over a long-term U.S. military presence in the region, stating that there is no “clear-cut answer” as to why the United States “want[s] land bases in Afghanistan.” Kabulov claimed that the present U.S. infrastructure in Afghanistan gives it “two to four weeks to redeploy up to 100,000 soldiers on the same bases.”

The 8,400 U.S. troops in Afghanistan, while down from a peak of 98 thousand, mean that the United States remains leveraged in the landlocked country. While Moscow could provide tactical assistance to the Afghan Taliban in order to increase U.S. casualties in Afghanistan to a level where the commitment becomes too costly politically, forcing a full withdrawal, it is also possible that it could use its growing influence in Afghanistan to exact concessions from the United States as part of a grand bargain. America’s role as the ultimate guarantor of the current Afghan regime—and the physical presence of U.S. military personnel in the country—are vulnerabilities that Russia could exploit.

During the next fighting season, Russia could aid the Taliban in targeting U.S. troops playing an “advise and assist” role alongside Afghan troops or help the insurgent group take over and hold northern Afghan provinces. Moscow could even aid Taliban efforts at rebranding, covertly subsidizing local goodwill projects claimed by the Taliban, such as the construction of infrastructure and schools.

In an extreme and highly unlikely scenario, Russia could ally with China and Pakistan to create an alternative bloc to the U.S-led coalition and push for and own a new, broad-based political settlement in Afghanistan. China has taken the unusual step of embracing the Russian position on Syria, in addition to Afghanistan. And Russia’s ties with Pakistan are steadily improving. Moscow has lifted a ban on arms sales to Islamabad and will deliver four Mi-35M attack helicopters to Pakistan in 2017. It will soon finalize a $2 billion natural gas pipeline agreement with Islamabad. And the two countries conducted their first-ever joint military exercises in Pakistan, much to the consternation of New Delhi.

Room for Cooperation with the United States?

China, Pakistan and Russia are more likely to attempt to countervail, rather than supplant, U.S. influence in Afghanistan. They would be foolish to attempt to attain stewardship over the poor, volatile country. And so, rather than reflexively view the Russians as adversaries in Afghanistan, the Trump Administration ought to look for convergence with Russia and other regional states. Since last spring, Washington and Kabul have backed away from the Quadrilateral Coordination Group (QCG), which included Beijing and Islamabad, which had attempted to facilitate an Afghan-led negotiation process with the Taliban. The Obama administration has since sought to encourage greater Indian involvement in Afghanistan, but India has neither the land connectivity nor the diplomatic and military heft that could adequately complement U.S. efforts to stabilize Afghanistan over the long haul.

The Trump administration should consider reviving the QCQ and inviting Russia to join the group. There remains substantial common ground between Russia and the United States when it comes to Afghanistan. Russia seeks to neutralize transnational elements connected to the Afghan insurgency and combat the drug trade. It also would like to block ISIS’s attempts to gain a foothold in the region. And while the Russians have granted legitimacy to the Afghan Taliban, they have indicated that they do not necessarily see the Haqqani Network as reconcilable. Inclusion of Russia in an Afghan-led peace effort backed by regional states signals respect for it as a great power with influence in Central Asia. In addition to helping stabilize Afghanistan over the long-term, it could serve as a confidence builder with Moscow that may translate into other conflict arenas. In contrast, for the United States, the risks from a more hostile approach toward Russia on Afghanistan outweigh any potential upside.

Arif Rafiq (@arifcrafiq) is president of Vizier Consulting, LLC, which provides strategic guidance on the Middle East and South Asia, and a fellow at the Center for Global Policy.