Is Russia Souring on Donald Trump? 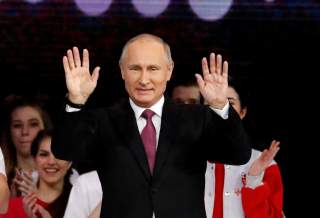 Editor’s Note: National Interest editor Jacob Heilbrunn interviews Andranik Migranyan, a professor at the Moscow State Institute of International Relations (an academic institution run by the Ministry of Foreign Affairs of Russia) about why “Trump is not the solution. He is the problem in U.S.-Russia relations.”

JH: Were you expecting Vladimir Putin to announce once again that he would run for the Russian presidency—or were you surprised?

AM: I was not surprised. Even a year or two years ago, I knew that he was going to run. He is a man on a mission. He has not accomplished his mission. I hope that he is going to accomplish it during his next six-year term.

JH: What is the mission?

AM: In 2012, right on the eve of the elections, the previous elections, I together with a small group of political scientists had a meeting with him outside of Moscow. He talked a lot about the steering of the governmental machine, and when you are manually steering it. His idea was that in such a large country, you can’t manually steer everywhere. Instead, you need to have well-established and developed institutions. This is my memory of that meeting--he said he’ll be satisfied if institutions will work and he will not have any problems when he leaves. He feels sure everything will work in a proper way when he leaves. That’s why for me it’s not a surprise. This mission he has not yet accomplished. I hope this is the problem he will address in the six years.

JH: But in Russia today, there isn’t a succession plan. On the contrary, power is centered around Putin with no real plan for the future. How do you alter that?

AM: He wants to transfer from personalistic to institutional power. How do you do that? This is the most important and difficult task. I think he will try to go in way of redistribution of power between executive and legislative. Who knows? There might be some changes in the constitution.

JH: What kinds of changes to the constitution?

AM: In 1993, we created a new Russian constitution. The president was granted vast powers. At the time, I wrote that it was a good thing because this was a period when very serious changes—privatization, radical reforms—had to be carried out. Already in 1989 I wrote that Russia needed an iron fist. But Mikhail Gorbachev failed and the country collapsed. In my view, when you are doing radical reform you need very strong executive power. It’s an enormous problem when you are doing reform. To prevent a revolution you need to amass very strong power. That’s why the current situation was understandable for me. But it must be on a temporary basis. Afterwards, you need to redesign the institutions and create a real system of division of power, checks and balances. Not the American type, it made the American political system absolutely unworkable. Too many checks and balances is bad, but some degree is very important.

JH: What role will Ksenia Sobchak, a television star, actress, and socialite who is sometimes described as “Russia’s Paris Hilton,” play in the upcoming election?

AM: I don’t think she can play an important role. Her role might be to activate youth electorate, youngsters who are not ready to participate in elections. She has a lot of admirers. Some people who are her followers. Nobody perceives her as a politician. She might attract some people to participate. The major problem of this election is that everybody knows Putin is going to win. The people who are in the Kremlin, they would like to have participation about seventy percent of the electorate, in order to make this victory more impressive, which would at least prove that really society is behind the leader and that he can have a mandate and implement his electoral promises.

JH: Is she there to weaken an Alexei Navalny candidacy?

AM: I don’t think so. He has no right according to Russian law to participate because he was sentenced in February 2017 to a five-year suspended prison sentence. I’m not trying to say it’s right or wrong. But this is the law. Ksenia Sobchak said if Navalny would participate she would cancel her campaign.

JH: Is Navalny to the right of Putin?

AM: I don’t have any clear idea. As a whistleblower he is pretty good. As a politician, I can’t see him as a politician. His base is very narrow. His activities are revealing corrupt events in Russian society, especially among high-ranking officials. It’s good he’s doing something. Some people are challenging him. He’s bringing some appropriate facts. I can’t see him as a politician. What is his ideology? In the Russian context he is rather marginal, though the western media is trying to heroize this opposition figure. In your own history, you’ve had a lot of these kinds of guys—he’s a kind of anti-system guy intent on destroying the existing order and creating everything from scratch.

JH: What’s the mood in Russia about the Olympics?

AM: The mood is very bad. The idea here-- because of Russian media, the statements of Russian officials, on talk shows on every channel--the dominant position is that this is an attempt to humiliate Russia. Russians believe the ban of Russia at the 2018 winter Olympics in South Korea is not based on any real evidence, a kind of political campaign against Russia, demonization of Putin and Russia—this is the dominant mood.

JH: Do you regard Grigory Rodchenkov as a hero or a traitor?

AM: Everyone regards him as a traitor, a criminal, maybe even mentally disturbed. A lot of people think he wanted long ago to leave the country, to make himself well-known. Well-known in the sense that he is the person revealing illegal activities of Russian sport authorities, or even government. Nobody considers him an honest, noble guy. He was the one giving all the doping to sportsmen and women. He is guilty.

JH: What’s the Russian response to the ban? Will it have a serious impact on the elections?

AM: The impact will be minimal. Putin said we can’t ban or let any of these sportsmen or women--they are welcome to do that on an individual basis. The Prime Minister Dmitri Medvedev said they will be supported financially to travel if they chose to attend. But I am not sure that many people even if they have a right formally to go will. Yesterday I watched one of the political talk shows and the question was are you supportive if someone goes on an individual basis without Russian symbols? The response was more than 70 percent are negative about that. Only 20 percent support this idea. Both psychologically and morally, it will be quite hard upon the athletes. Morally it will hard to justify. It’s good for Putin—he says on a state level we’re not going to make a decision. If he said we are going, it could damage his image.

JH: Is Russia souring on Donald Trump? Julia Ioffe, who has reported for many years on Russia, has a new cover story in the January-February issue of the Atlantic called “What Putin Really Wants.” The thrust seems to be that when it comes to Trump, Putin has a case of buyer’s remorse.

AM: She interviewed me twice. Russia is not sour or dissatisfied. President Putin said that recently again when he was asked about Trump. He is a realist. They listen endlessly to statements of Trump and he might be the politician who is constantly saying that it’s better to have good relations with Russia. He is handicapped, among other things, by Congress. So Trump is not the solution. He is the problem in Russian-American relations. The problems are clear, starting with the idea of Trump’s connections with Russian authorities. Congress is using it as a cudgel. The media is using it. There is no shift in Russia itself. But there is an understanding that Trump can’t deliver on anything. This is what Russian officials have come to conclude.