Russia Stands to Gain from Trump's Handling of the Khashoggi Crisis 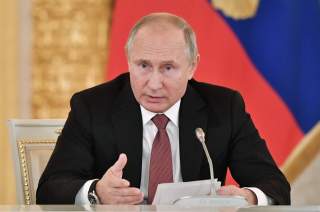 The brutal killing of Jamal Khashoggi may or may not upend traditional international politics in the Middle East. After a tussle in the White House, it seems that voices friendly to the House of Saud have gotten the upper hand quite decisively. Given President Donald Trump’s recent pronouncements on the issue, perhaps it is not too far-fetched to say that most everything will slowly get back to normal. True, Turkish president Recep Tayyip Erdogan emerges with a somewhat enhanced reputation. The U.S. military is also finally taking the long overdue step of halting the refueling of Saudi aircraft conducting attacks into Yemen. In the scope of Middle East politics, however, the fundamentals seem not to have shifted in a major way.

Nevertheless, an important question to probe in the wider analysis is the “Russian angle.” Even as Eastern Europe has been set on edge by the Kerch Strait Crisis that I had predicted in a previous Bear Cave column for this forum, this article asks what impact the Khashoggi affair will have on Russia’s emergent role in the Middle East? Will there be a wider consequence for global politics and the future of U.S.-Russian relations more generally? Given that a year ago, many analysts were pronouncing that Moscow had eclipsed Washington as the major power broker in the Middle East, this question seems hardly obscure. Then, there is the unhappy reality that the Kremlin and the White House have been engaged in a dangerous proxy war in Syrian Civil War, wherein Saudi Arabia’s role has been considerable. Finally, there are the vital questions of Iran and the related price of oil that will be influenced by both the Russian factor and also the Khashoggi affair. As is customary in this Bear Cave column, we first take a look at some recent Russian writings on this important subject.

One might perhaps expect that coverage of such a gruesome political murder could be restricted in the Russian context given domestic sensitivities on that subject or even the imperative to maintain diplomatic flexibility, but I could find no such irregularities in the coverage by leading Russian newspapers that seemed to treat the subject with reasonable objectivity. There is, for example, the article by Mariana Belenskaya [Марианна Беленькая] in the newspaper Kommersant [Коммерсантъ] that offers a rather comprehensive summary. After the headlines announcing that Riyadh would escape from any serious sanctions in order that Washington preserves the relevant contracts, she explains matter-of-factly in the first sentence of the piece that one of the main rationales for the American president’s decision was “to prevent the development of ties between the Kingdom and both Russia and China [не допустить развития связей королевства с Россией и Китаем].” It is duly reported that President Donald Trump further explains that “If America cancel these contracts, Russia and China will be huge winners…It would be a great gift to them straight from the United States [Это был бы прекрасный подарок им прямо из Соединенных Штатов].”

The article explains that the other main rationale for maintaining the U.S. relationship with Saudi Arabia, of course, is Iran. This Russian article discusses the CIA assessment, Trump’s refusal to listen to the audio tape of the murder, as well as the president’s ultimate conclusion that Crown Prince Mohammed Bin Salman might have known, but also might not have known [Может быть, знал, а может быть — и нет!]. Realizing that many Americans disagree with the president’s conclusions, Belenskaya quotes the Washington Post’s observation that an admission that the prince was responsible for Khashoggi’s murder would also be an admission that the Trump administration’s risky, early bet on the same prince was “a mistake.” She interviews an American expert, Daniel Levy, who explains that the crown prince presents a dilemma for the American foreign policy establishment, since many had believed he might be a genuine reformer, but were simultaneously perturbed by his aggressive foreign policy. A Russian Middle East expert, Gregory Kosach [Григорий Косач], is also quoted, explaining that the crown prince is in little danger given that “he is supported by the majority of youth and within the national security organs [его поддерживает большинство молодежи и силовой аппарат].” The article does not have much to say about Russia’s reaction to the murder or the impact on Russian foreign policy. It is briefly noted that the Saudi defense minister has said that Riyadh may pursue negotiations over weapons contracts with Moscow, and the American expert Levy is quoted explaining that Khashoggi’s murder may facilitate better relations between Russia and Saudi Arabia, since the Kremlin could deploy the argument that “America is an unreliable ally [что США ненадежный союзник].”

A second article by journalist Yevgeny Shestakov [Евгений Шестаков] appearing in Rossiyskaya Gazeta [Российская Газета] takes a much more confrontational tone and even goes into the sensitive territory of explicitly comparing the Khashoggi murder and the alleged Salisbury nerve gas attacks against Sergei and Yulia Skripal. Shestakov writes that the evidence of the crown prince’s culpability is hardly in question given the phone call made from a Saudi intelligence colonel in the Istanbul consulate after the killing to a close advisor to the crown prince. His crisp rendering of Trump’s judgment is simply that “… the crime is awful, of course, but business is more important” [преступление, конечно, ужасное, но бизнес важнее].” Europe is also criticized, and the Russian journalist complains that there have been hardly any sanctions, no ejection of diplomats, nor limitations on Saudi participation within international fora.

Shestakov chooses a Hollywood analogy to make a dramatic point regarding his perception of American hypocrisy in this case. He explains that the movie Saving Private Ryan supposedly illustrated that the United States was willing to “turn the whole world over” to save one single life, but he reflects that was just Hollywood and hardly comports with reality. In the case of the Khashoggi affair, the U.S. president is said to “step easily over the dismembered corpse of the journalist in order to continue conquering the world in the name of American greatness [с легкостью перешагнув при этом через расчлененный труп журналиста, чтобы продолжить завоевание мира во имя величия Америки].” Making a direct contrast to the Skripal episode, the Russian journalist complains: “This invented guilt of Russia turned out to be enough to bring the ‘righteous wrath’ of the West to our country. [Этой выдуманной вины России оказалось достаточно, чтобы обрушить 'праведный гнев' Запада на нашу страну],”—a fate that apparently Saudi Arabia has been spared from.

The critique has some basis, of course. Even if the British accusations are all correct, and one may have some doubts given the timing of the event with the World Cup and other oddities about the case, the alleged murder of a double agent is rather different than one of a journalist—even if both constitute despicable deeds. Spies, almost by definition, operate in the netherworld of the dark arts and play by a different (and an altogether sordid) set of rules. Journalists, by contrast, represent our collective aspirations to live in transparent, orderly and well-governed societies that protect human rights as sacred. They are the foremost representatives of the “liberal order,” and that is why the episodes are actually rather different, even if most journalists have themselves chosen to conflate them as the habits of authoritarian states.

To be sure, the foremost consequence for Russia of the Khashoggi affair will be the impact on the price of oil. If Riyadh is paying back Trump for helping the crisis to blow over by depressing oil prices, that is surely a blow against Moscow, which itself was just getting used to rising oil prices, and thus developing once again a cushion against the direst economic scenarios. Americans may wish to ask themselves, however, if low oil prices are truly in the national interest, especially given the looming threat of climate change. Still, Russia has generally made gains in the crisis, not least because of the stark humiliation for U.S. strategy that has transpired in the last few weeks. The nexus of interests uniting Moscow, Tehran and Beijing grows ever stronger, so it seems, as the temperature of the new Cold War grows seemingly colder with each passing week.

Nevertheless, the American president is not entirely wrong, of course. The national interest must occasionally trump human rights, as all realists understand. It would defy prudence—the most sacred principle in diplomacy—to overly alienate Riyadh. Thus, a rash break in U.S.-Saudi relations could, for example, lead the Saudis into a mad dash to secure atomic weapons, for example. Yet, the comparison between the Skripal and Khashoggi deeds is indeed instructive, as suggested above. The United States simply must maintain good working relations with Russia, given Moscow’s massive nuclear arsenal and the multiplicity of common “touch points” in U.S.-Russian relations, from Ukraine, to Syria, to Afghanistan, to North Korea to the Arctic. Saudi Arabia is hardly in the same category, even if it has its hands around the oil spigot. A significant recalibration of U.S. strategy in the Persian Gulf is indeed warranted in the wake of the Khashoggi affair, the kidnapping of the Lebanese prime minister, the failed attempt to overthrow Assad in Syria and especially because of the inexcusable atrocities in Yemen. Most fundamentally, the United States should never mortgage out its unique foreign policy interests to foreign regimes with their parochial agendas, whether to that of the despotic Saudi state, or to any other.