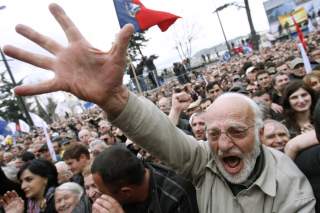 At least since the 2004 Orange Revolution in Ukraine, the Russian Federation has planned to counter the “color revolutions.” These uprisings involved the overthrowing of post–Cold War dictators in Yugoslavia 2000, Georgia 2003 (rose), Ukraine 2004 (orange), and Kyrgyzstan 2005 (tulip). Since then, the term has become somewhat passé in the West, but Russia remains obsessed with them even in 2019. Given that all four of those case studies listed above reflected the fall of a Russia-aligned government, this fixation makes sense.

Since 2005, regime changes in semi- to un-democratic states with a pro-Russian policy have avoided the “color” label: the 2010 April Revolution in Kyrgyzstan, the 2014 Euromaidan protests in Ukraine, and the 2018 protests in Armenia could be considered spiritual successors to the original wave. In the ten years between the Orange Revolution and Euromaidan in Ukraine, Western commentators frequently claimed Putin had closely watched the progress of events in 2004 and was planning how to prevent them occurring in the future.

Between the 2012 suppression of protests in Russia at Putin’s “castling” back into the Kremlin and the Russian incursions into Ukraine in the aftermath of the Euromaidan in 2014, it certainly seems that Russia did make plans to counter color revolutions. And it is not just military policy as well: since the 2018 protests in Yerevan brought down the government of Serzh Sarkisian, Russia has frequently brought the new Armenian prime minister Nikol Pashinyan to Moscow to ensure he does not deviate from the Collective Security Treaty Organization and the Eurasian Economic Union.

That said, these new countermeasures do not seem to be succeeding. Ukraine is now more closely aligned with the West than ever despite Russian diplomatic, military, and economic pressure. Russian defense media impotently monitors Armenia and even stalwart ally Belarus seeking political and military relationships with the West, China, and others. And now, the United States plays directly into Russian propagandists’ hands: the U.S. government is actively trying to overturn the regime of Russian partner Venezuelan president Nicolas Maduro—and there is nothing Russia can really do about it.

Though the United States blasted Russia’s sending of a pair of strategic bombers to Venezuela in December 2018 and West is hyperventilating about a possible return of Russian bases to Latin America, Russia does not have such plans and strategic bombers cannot destroy a mass uprising. Some Russian media outlets claim that Venezuela’s Russian-built S-300V missile defense batteries buy Moscow some extra time to decide how to save Caracas from U.S. intervention, but it is difficult to imagine how Moscow can pull Maduro back to solid ground.

Russia has remained stalwart in standing by the Maduro regime, but it lacks the economic power to pull Venezuela back to financial stability despite several attempts over the course of 2018. Russian defense bloggers documenting how Maduro might be able to forcibly maintain order in the country have only been able to point out Chinese-built military and police vehicles as crowd control functions. Meanwhile, China has been far less enthusiastic in its support for Maduro during the current crisis than Russia, merely continuing to recognize the regime and calling for non-intervention in its affairs rather than denouncing U.S. government policy as regime change like Russia has done.

The symbolic weight of Russian diplomatic pronouncements has been lost in the sheer cacophony of information put out on official and unofficial Russian channels. Russia’s Armed Forces continue to regain strength, but they remain tied down in Syria and rebuilding abandoned capabilities along the Ukrainian border. The strategic bombers that came to Venezuela represent one of the very few Russian military assets that probably can reach South America: the Russian Navy probably could deploy a couple of combat-capable ships at least to the Atlantic Ocean, but in so doing would be putting a substantial portion of its deployable maritime assets at risk of either destruction by the United States if the Trump administration decided to escalate or humiliation if the ships failed to turn the tide.

Closer to home, Russia and China have been honing “anti-terror” military and paramilitary capabilities to stop color revolutions. However, even these preparations are being questioned by Russian defense thinkers’ worries that the West might use “hybrid warfare” tactics to detach Russia’s Arctic ports from Moscow’s control. After all, Russian Chief of the General Staff Valery Gerasimov’s infamous article was actually about how the West supposedly manufactures color revolutions, using the 2011 Arab Spring as its primary example.

The Russian economy may be stagnating, but it is hardly collapsing like in Venezuela. As such, it is unlikely that a color revolution is imminent in Russia itself. And, if it were, the Russian Armed Forces and National Guard seem increasingly prepared to respond. However, preventing the collapse of Russia-friendly regimes remains extremely difficult for Russia, especially in countries as far away from Moscow (and close to the United States) as Venezuela. The Syria model (i.e. large-scale military commitment) will likely remain the only viable solution for regime support against adversity that Russia possesses for its allies and friends. Unfortunately for Moscow, large-scale military commitments are both expensive and difficult to conduct quickly or simultaneously.

Nicholas J. Myers is a Russian and Belarusian military analyst at War Vs. Peace. You can follow him @WarVsPeaceOrg or see his research at warvspeace.org.