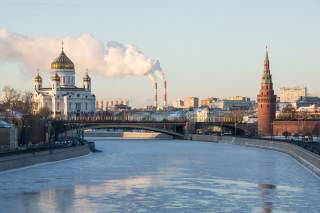 In his address before a joint session of Congress Tuesday, President Donald Trump said in clear and unequivocal terms, “It is American leadership based on vital security interests that we share with our allies all across the globe. We strongly support NATO, an alliance forged through the bonds of two world wars, that dethroned fascism, and a Cold War and defeated communism.” This statement, made from the rostrum of the House chamber, reiterates the firm commitment of the new president and his national security team to the transatlantic security relationship that was delivered by Vice President Mike Pence during his visit to Europe in February. Trump went on in his remarks to outline the basis for rapprochement with countries that currently are in a more adversarial relationship with the United States: “America is willing to find new friends, and to forge new partnerships, where shared interests align.” These statements, delivered in the U.S. Capitol before the representatives of the American people, cannot be any clearer in laying out the foundations of how the Trump administration will conduct U.S. foreign policy.

Yet the narrative of Trump as Putin’s “puppet”—a characterization made last October by his opponent in the general election—seems too good for many parts of the Washington political and media establishment to forego. This past Friday, a pair of pranksters passed out Russian tricolor flags emblazoned with “Trump” to attendees at the Conservative Political Action Conference, in advance of Trump’s remarks. Within minutes, the story was traversing through the media bloodstream about American conservatives in thrall to Trump pledging their fealty to the Kremlin.

Facts, of course, never get in the way of a good story. Everyone got a good laugh from a Saturday Night Live skit that depicted Russian president Vladimir Putin assuring an American audience that he would look after the United States, his most “expensive” purchase—and we have daily and, in some cases, hyperventilating reminders about how Moscow is supposedly pulling the strings of the new administration. And yet, after his first month in office, the Trump administration has not lifted a single sanction that was imposed by the previous administration for Russian actions in Crimea and eastern Ukraine, or in connection with Russia’s efforts to show that it, too, could intervene in U.S. domestic political affairs. U.S. military deployments to eastern Europe, as part of an ongoing “reassurance” initiative, have proceeded unabated. Trump has reaffirmed his commitment to U.S. alliances in Europe and Asia, and taken credit for getting partners to finally begin ponying up more spending to sustain their efforts. The proposed defense budget he is sending to Congress contains all sorts of items that will not please the Kremlin—from increases to missile defense, to expanding the conventional force, to modernizing the American nuclear arsenal. Furthermore, there are no indications that the administration is planning any reversals of U.S. policy anytime in the near future.

Yes, in his public statements, it is also clear that Trump, even if he does not agree with Putin’s positions or actions, nevertheless sees him as a figure to be taken and treated seriously, which goes against the prevailing preference in Washington to either belittle the Russian leader or to consider him as some sort of supervillain. It is a stretch, however, to suggest that this change in tone signifies that Trump is somehow beguiled by Putin.

Trump has consistently indicated, both on the campaign trail and now in office, that his stance towards Russia (or any other country) will be guided by his assessment of what best serves American interests. There is no evidence that suggests he holds an inordinate fondness for Putin, believes that the Kremlin “won” the election for him, or that past attempts at business dealings in Russia color his views on what American policy ought to be. However, it is true that his assessment of what best serves the American national interest differs from the so-called “bipartisan” consensus. His statement before Congress that “we will respect the foreign rights of all nations, and they have to respect our rights as a nation also” is a more polite (and political) way of saying that the United States is offering no blank checks to its partners to cash, nor is it necessarily bound to see the world the same way that they do—and that they must be prepared to live with the choices they make as separate, sovereign states. While Russia was not explicitly mentioned in any way, the articulation of this principle seems to suggest Trump’s view that the United States does not necessarily have to get involved in every conflict or dispute between Russia and another country.

Trump has also signaled that he sees U.S. sanctions on Russia as a means to induce Moscow to the bargaining table to see what sort of deals can be reached that would benefit U.S. interests. So far, some of the criteria that have been laid out include a willingness to consider sanctions relief if there is compliance with the Minsk Accords (for regulating the conflict in Ukraine), or if Moscow is prepared to offer significant and meaningful assistance in areas that directly touch upon critical U.S. security priorities, starting with the fight against the Islamic State. At no point has he ever suggested unilaterally lifting sanctions in the absence of direct actions on the part of the Putin administration that would justify their removal. Consistently, he has maintained that any improved U.S.-Russia relationship would have to be based on concrete steps in pursuit of shared interests.

But the current climate in Washington is creating conditions where Trump’s assessments of what best serves U.S. interests will automatically be seen as suspect, and any move on his part to improve ties with Russia discredited. Moreover the Congress is still considering legislation that would, in essence, lock in the second-term Obama strategy towards Russia as permanent U.S. policy. Ironically, under some drafts that are being circulated, Trump would have far less flexibility than Barack Obama did in being able to offer the same kind of inducements Obama was able to proffer to both Iran and Cuba to bring them to the negotiating table and to conclude deals. Moreover, the sense that any effort to bargain with Moscow or to offer trade-offs is somehow anathema goes against the reality, as Brian Carlson has noted, that most American “diplomatic success stories are tales of compromise and adaptation, where both we and the opponent have given up something, not clear and simple victory.”

In turn, Moscow’s foreign-policy establishment is watching. The Kremlin is extremely cautious at offering any upfront compromises or concessions, since there is no guarantee that Trump could reciprocate. Moreover, there is a current of thought that suggests that even if Trump could reach a satisfactory deal that served U.S. interests, he would either have difficulty imposing it on a recalcitrant U.S. political establishment or it would turn out to have a very limited shelf life. The idea that Trump represents a “blip” rather than a fundamental change in U.S. policy has been gaining currency. This strengthens a perspective among advisors around Putin to continue to push ahead with Russian actions, because showing restraint will pay no dividends—or, among some, to even discard once and for all the possibility of forging a productive relationship with the United States.

As I noted in a recent piece, based on unofficial conversations in Moscow, it appears that the Russian government is prepared to give the Trump administration time to get settled (while at the same time not averse to taking steps to better Russia’s bargaining position). Yet Trump’s freedom to maneuver may be seriously constrained by the time he and Putin have their first face-to-face meeting. Will that necessarily serve American interests?

Last year, then-candidate Trump laid out his position: “We desire to live peacefully and in friendship with Russia. . . . We have serious differences with [Russia]. . . . But we are not bound to be adversaries. We should seek common ground based on shared interests. Russia, for instance, has also seen the horror of Islamic terrorism. I believe an easing of tensions and improved relations with Russia—from a position of strength—is possible. Common sense says this cycle of hostility must end. Some say the Russians won’t be reasonable. I intend to find out. If we can’t make a good deal for America, then we will quickly walk from the table.”

Does it make sense to give him the chance, the space and the breathing room to try?