Is Russia Trying to Take America's Role in the Middle East? 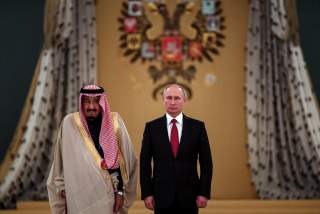 When opening the meeting with Saudi Arabia’s King Salman Vladimir Putin reminded him that the Soviet Union was the first country to recognize the kingdom in 1926. Yet in the decades that followed Saudi Arabia turned to be one of Moscow’s staunchest opponents in the region. However, times have changed and Salman became the first king to visit Moscow. Furthermore, it seems that the King’s visit jump-started Saudi-Russian cooperation of unprecedented scale.

Analyzing the prospects for this cooperation, two facts are especially interesting to notice. First, there are many Western accusations that Putin is trying to revive Soviet international ambitions. One can argue whether these accusations are accurate, but it is clear that the current Russian foreign policy, in many regions, goes further than the Soviet policy could ever go. The Middle East is the most impressive example of this.

The Soviet Union and Israel sometimes balanced on the verge of direct military confrontation. Iran, both under the Shah and after the Islamic Revolution had complicated relations with its northern neighbor. Turkey was an exemplary NATO member. Saudi Arabia was eager to develop its cooperation with the United States even when the United Kingdom still was the Western power dominating the region. Today, the King Salman became the last of the leaders of these four countries who came to Russia to see Vladimir Putin and to discuss how a bilateral cooperation can be developed.

The fact that it was the first visit of any of the Saudi monarchs to Russia, when Hassan Rouhani, Recep Tayyip Erdogan, and, especially, Benjamin Netanyahu see Vladimir Putin regularly, should not be misleading: Saudi Arabia can quickly catch up with other major Middle Eastern powers in their cooperation with Russia. Even more importantly—the second fact crucial to understanding the current Saudi-Russian rapprochement—the numerous disagreements and even a rivalry between two countries does not prevent cooperation when it is possible.

The complicated balance between rivalry and cooperation covers several issues. One can wonder how leaders of two countries with so many disagreements can be so optimistic and cordial as President Putin and King Salman. Russia and Saudi Arabia are not only competitors on the global energy market, but also they support different sides of the brutal Syrian civil war. Only last year it seemed that Moscow and Riyadh were heading to a full fledged conflict—Saudi Arabia was concerned with Russian support to Bashar al-Assad, the start of negotiations on managing oil prices was difficult, and the Deputy Crown Prince Mohammed bin Salman, the new favorite of the Saudi King and international media, was almost bragging, that the kingdom, being able to sell as much oil as needed to cover the Saudi expenses, was not very concerned with the oil prices.

This year the turnaround could hardly be more drastic. The Assad forces supported by Russia are victorious, the collaboration between Russia and OPEC grows and the Saudi king arrives in Moscow. However, this dramatic change is not unique: after the downing of Russian fighter jet by Turkish air force at the end of 2015, the Turkish-Russian relations went through the period of fast escalation of hostility. A couple of years later, however, cooperation between Moscow and Ankara has never been so deep. It seems that in the case of Saudi-Russian relation the King Salmon personally intervened to prevent the escalation. Such intervention is understandable: despite all the differences there is no vital issue for both countries where an uncompromised struggle on the zero-sum game terms could make sense. Moscow, for its part, has never proclaimed Saudi Arabia an enemy, even when Wahhabism, dominating in Saudi Arabia, took roots in Dagestan and the rebellious Chechnya.

Fundamentally, one can argue that Riyadh shares Moscow’s view that compartmentalization of issues in foreign policy can go a long way. Whatever the various differences, when compromises and agreements can be reached, they should be. And today, there are many spheres for Saudi-Russian cooperation. There are more than dozen of various documents signed during the King’s visit to Moscow aimed to provide the basis for partnerships in different areas—from space exploration to cultural exchanges, from investments to arms sales, from cooperation in science to agriculture. Two areas are especially worth emphasizing.

First, two countries begin to evaluate how to best cooperate in nuclear and renewable energy. Both leading energy producers are concerned with domestic energy needs and the Russian experience in nuclear energy can be very handy for Saudi Arabia. Saudi investments can be helpful for developing and applying technologies necessary to supply very significant Russian domestic energy demand. Second, in the aftermath of the visit it was announced that Saudi Arabia is buying Russian air defense systems S-400.

Interestingly, in both spheres Riyadh seems to follow Turkey’s path. One can assume that Saudi Arabia and other Gulf countries were watching Washington’s reaction on Turkish plans to buy S-400. When it became obvious that the United States was not going to oppose the deal between Moscow and Ankara, unlike the previous attempt by Turkey to purchase air defense systems from China, Russia has achieved a very serious success on the global armaments market. If a NATO-member can buy S-400, why other interested parties should wait?

To conclude the analysis of the Saudi King’s visit to Moscow, it is important to evaluate the mid- and even long-term prospects for this cooperation. Besides the readiness of two parties to follow the compartmentalization policy mentioned above, this partnership is based on non-interference in domestic affairs of each other and the absence of ideology. According to the Saudi foreign minister Adel al-Jubeir: “Both countries believe in the need to respect the principle of sovereignty and respect for international law and non-interference in the internal affairs of other states. Both countries reject the imposition of principles that are alien to the societies of our two countries.”

Western observers could wonder whether Russia, with the development of the relations with Middle Eastern powers, is going pretend to succeed the United States in the position of the authority dominating the region. Here, Moscow will hardly reach for this ambitious goal, clearly understanding the dangers of overextending. When bilateral relations with all major regional powers are developing there is no need for something more pretentious. The United Kingdom was crucial for providing security in the region as a part of the legacy of British colonial policies. Washington, initially, took this responsibility from London as a part of Cold War strategy, and later, the regional players become apt at pulling the United States into resolving their problems at American taxpayers’ dime and, often, at the expense of American long-term interests. Russia is different. The lessons of fatal overextending of the Cold War have been learned. And the Russian domestic politics provides almost no room of foreign lobby supporting adventures abroad. That is why the Russian-Saudi cooperation, as well as other regional partnerships, will hardly lead to a Russian ambition to become the Middle Eastern “policeman.”