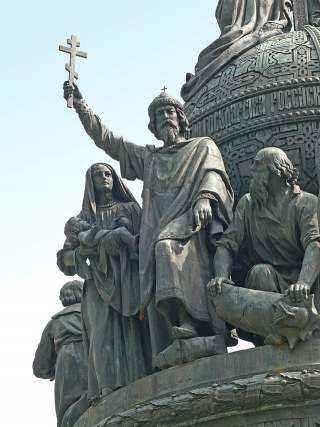 Dubbed Russia’s “historian-in-chief,” Putin sees it as part of his role as president to unite Russians around a common respect for their history, culture and traditions. A few weeks after Rurikids closed, he delivered his annual Presidential Address to the Federal Assembly, heavy on history even for him. The “historical reunification of Crimea and Sevastopol with Russia,” he said, was one of “this year’s landmark events,” because:

It was in Crimea […] that Grand Prince Vladimir was baptised before bringing Christianity to Rus. […] even though its borders were not marked then, […] Christianity was a powerful spiritual unifying force that helped involve various tribes and tribal unions of the vast Eastern Slavic world in the creation of a Russian nation and Russian state. It was thanks to this spiritual unity that our forefathers for the first time and forevermore saw themselves as a united nation. All of this allows us to say that Crimea […] and Sevastopol have invaluable civilizational and even sacral importance for Russia, like the Temple Mount in Jerusalem for the followers of Islam and Judaism. [Emphasis added]

This paean to Holy Rus’ echoed Rurikids’ message: the God-given indivisibility of the East Slavic world regardless of the modern Russian-Ukrainian border; the imperative of a strong, united State; the role of Orthodoxy as repository of Russia’s values as a distinctive world civilization. If Hill and Gaddy emphasized the rhetorical role played by Petr Stolypin (Russia’s reformist prime minister, 1906-11) in Putin’s first term as president, the 2014 Ukraine crisis has elevated Prince Vladimir of Kiev (“the Saint”), a figure not only more closely connected to Crimea, but also a convenient standard-bearer of conservative, religious values in a “culture war” that Putin sees as part of a bigger “clash of civilizations” between Russia and the West. “Who is Mr Putin?”, ask Hill and Gaddy. One answer is a Prince Vladimir, Nevsky, Donskoy and a sanitized Ivan IV, too, rolled into one—a latter-day “Rurikid” for Russia’s twenty-first century.

Ironically, while for Putin medieval Crimea was “the spiritual source of the development of a multifaceted but solid Russian nation and a centralized Russian state’, Muscovy achieved domination over “all the Russias”—including modern Ukraine—not by preserving the decentralized structures of the Rurikids, but by suppressing them in the name of a novel, centralized autocracy. Faulty as history, Rurikids’ defiant expression of offended Russian exceptionalism is nonetheless more than a pose: the West’s doggedly legalistic construction of the crisis has consistently underestimated how much Ukraine means to Putin—and a substantial proportion of the Russian public—as well as the high costs Russia is prepared to pay to keep it out of the West’s orbit. “Today our task is not only to sort out the past (although that must be done),” Lavrov recently declared at a meeting of the Russian Council of Foreign and Defence Policy, “but most importantly, to think about the future.” Rurikids is clearly meant to help Russians do both. It opened in St Petersburg, the first stop on a national tour, on January 30.

Matthew Dal Santo is a Danish Research Council post-doctoral fellow at the Saxo Institute, University of Copenhagen, Denmark. He previously worked for the Australian Department of Foreign Affairs and is a former Fellow of Trinity College, Cambridge. He tweets at @MatthewDalSant1.