Russia vs. America: Are Laser Weapons the Key to Victory? 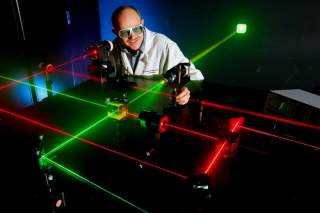 In almost every film speculating about the future, we see a familiar scene: enemies firing at each other using various laser and beam weapons. Is there a prospect for the development of real models of such weapons? What can be achieved in this sphere, given existing technology? At what level is the development of various means of laser destruction, including air and missile defense systems (ADS and MDS)? And the main question: which trendsetter in the world of weapons is ahead—the United States or Russia?

First of all, it’s worth mentioning that lasers have been used by the armed forces of most of countries for a long time. There are laser rangers, designators that guide air bombs, missiles, artillery shells and so on. Nevertheless, military officers’ long-held dream of using lasers to destroy targets hasn’t yet been implemented in practice, despite over a decade of development and tests. The apparent advantage of laser weapons are their its almost absolute hit precision (if a corresponding pointing system is available) and a maximum beam velocity equal to the speed of light (at the distances under examination, the target is hit almost instantaneously).

One of the critical disadvantages worth pointing out is a very low laser efficiency factor under the conditions of Earth’s atmosphere. For instance, one of the most powerful Soviet laser prototypes, installed aboard the ship Foros, had an efficiency factor of only 5 percent at a distance of no more than four kilometers. In the context of space, the loss of energy and scattering are much lower, though at long distances the issue is still pressing (for such objectives as the destruction of enemy missiles and warheads at a distance of one thousand kilometers).

Now, let’s consider the specific objectives assigned in the past and today to laser weapon developers and the current situation in this sphere, as well as further prospects.

The idea of creating a laser missile defense system as a means of defense against intercontinental ballistic missiles (ICBMs) immediately comes to mind. But is this a good idea, and what is keeping it from being put into action?

The most popular and widely known laser MDS project was the Strategic Defense Initiative (SDI, better known as the “star wars” program). The placement of Earth satellites with the weaponry based on new physical principles, one of which was laser weaponry, was given consideration within SDI. Initially, the project was much too ambitious: it was impossible to put the laser weapons of that time (and even of today) into orbit together with an energy source to recharge it. Furthermore, one is forced to face insurmountable laws of physics: because of the very low laser efficiency factor, the enormous amount of heat (a minimum of one hundred megawatts) is generated when shooting from rather powerful guns (more than five megawatts). The task of heat rejection in such volume in the space context is almost unsolvable; the maintenance of normal temperature is even difficult aboard the International Space Station, even though only astronauts and onboard systems generate heat there.

The second physical problem is to provide maximal beam scattering; otherwise the laser spot will be “smudged” and will not do damage to enemy ICBMs. In order to achieve acceptable results, it is necessary to create a perfect mirror with a minimal area of ten meters. Currently, the Hubble Space Telescope holds the record, with a mirror 2.4 meters in area. It was produced and perfected over many years and then, nevertheless, a defect of only two microns forced special adjustment equipment to be sent into space. Another problem is related to the mirror: while shooting, the reflector itself will be directly exposed to some amount of energy irrespective of the degree of reflectivity. With the high energy levels of a laser beam, even a small percentage will be enough to put the mirror out of service.

And finally, it is always worth remembering that an imaginary enemy could protect one’s missiles and warheads. The technology for producing materials capable of absorbing large volumes of heat is well known: the machinery launched alongside astronauts, upon atmospheric reentry, is exposed to a load equivalent to the radiation emitted from a laser with a power of five to ten megawatts at a great distance. It is also not a problem to cover warheads and ICBMs with the same foil to reflect the majority of radiation.

USSR chose a different path that time: it started developing the satellite destroyer station “Polyus.” The objective was evidently much simpler than the Americans’—as much less distance was required to fire the targets and far less radiation power, it was sufficient only to ruin the enemy’s satellite optical sensors to turn them to space junk. A model station, called “Skif-DM,” was launched in space in 1987, but was unable to enter orbit. After that, the project stalled. A laser with a power of one megawatt engineered for “Polyus” was installed on the IL-76 plane (called A-60 in that manifestation), but this will be covered below.

Taking into account the above, it may be concluded that creating an orbital laser missile-defense system is currently impossible and is unlikely to become reality in the foreseeable future. All discussions of the subject were either a bluff on the part of the United States (in order to draw USSR into a new, absurd phase of the arms race) or a means of cutting the defense budget on an exceptionally large scale.

The creation of lasers operating within the X-ray range of frequencies appears to have been a complex task. This is particularly the case for powerful lasers capable of use for military goals. The only known way to obtain such a beam was laser pumping with the help of a nuclear burst. The burst turns metal strings into plasma threads, generating a laser within X-ray range. This process lasts some microseconds, whereupon the laser power becomes enormous. Such types of weapon were being developed by the United States, and, according to rumors, the first and the last test was carried out in 1980. A nuclear charge with a power of twenty kilotons was blasted underground, and a beam with the duration of one nanosecond and 130 kilocalories of directed energy (comparable to a machine gun’s string of bursts) was received. Inaccurate information on similar tests in USSR, with analogous results, is also available.

The American project was called “Excalibur” and was probably part of SDI, aiming to destroy Soviet ICBM warheads in space. Nevertheless, the laws of physics interfered again. The power of the resulting beam was not high enough because of various unresolved problems requiring the use of high-powered nuclear charges—more than one megaton—and strings more than twenty meters long. And even afterwards, one omission remained: materials capable of reflecting X-ray radiation hadn’t yet been engineered. For this reason, creating a mirror to focus the beam is impossible. Therefore, the gap of X-ray beams turns out to be very large and even ideally, at distances of one hundred kilometers, the energy will constitute only one hundred kilocalories per square centimeters—insufficient to destruct a duly protected warhead. Thus, X-ray lasers haven’t met expectations either.

Both the USSR and the United States developed and tested plane projects equipped with laser weaponry. Due to enormous dimensions and weight in both cases, the lasers were placed on heavy-duty aircraft.

The American Boeing YAL-1 aircraft first got off the ground in 2002. A one-megawatt chemical laser was installed aboard. The plane was planned to be able to destroy taking-off missiles from a distance of three to four hundred kilometers; it was supposed to hit at least twenty missiles per flight. Nevertheless, the laws of physics appear to have intervened again: in spite of the impressive successful results in optics and other technologies, the laser beam was nevertheless losing too much energy because of dust particles in the air, and a cloud stood in the way, it became almost completely useless. One year prior to the program’s closure, in 2010, one successful test was performed: the plane was able to hit a taking-off ballistic missile. After the shot, the gun cooled for approximately one hour, whereupon it hit another missile. The goal appeared to have been partially achieved; nevertheless, the distance from which the shot was performed is unknown.

The project was wound up in 2011 due to its costs ($5 billion had already been spent at that time) and inefficiency. Defense Secretary Robert Gates declared that in order to meet the goals, a laser twenty to thirty times more powerful was required. There was another problem, too: three to four hundred kilometers was a very small distance in order to cope with the task of strategic missile-defense systems, especially if it was confronting countries with large areas, such as China or the Russian Federation. Heavy-duty aircraft would not be allowed to reach such a distance, having been struck down much earlier.

The A-60 laser plane, a version of the IL-76 heavy-duty aircraft, was created in the USSR/Russian Federation. Its laser power constitutes one megawatt, and work on the plane has recently been restarted. There is almost no reliable information on tests and their results. There is, however, data stating that in 2009 the A-60 was able to position a beam over a satellite vehicle orbiting at 1,500 kilometers. Later on, information appeared stating that the project had been developed and that a system suppressing the enemy’s optical and electronic intelligence assets is to be created.