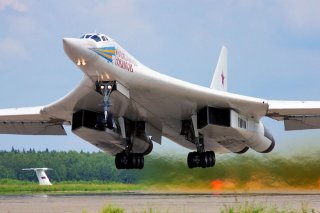 In the previous articles “These Russian Nukes Are Better Than America’s” and “U.S. vs Russia: Struggling for Undersea Nuclear Supremacy” we reviewed the strategic nuclear balance between Russia and the United States in the context of land-based intercontinental ballistic missiles (IСBMs) and submarine-launched ballistic missiles (SLBMs), respectively. We have also examined in detail the issue of the total number of strategic carriers and nuclear warheads in the arsenals of these countries and their compliance with the New Start Treaty, which reduces the number of carriers to seven hundred and the number of warheads to 1,550.

In this article, we will address the last component of nuclear forces left: strategic bombers. In the U.S. and Russian arsenals, bombers make the least share of strategic nuclear forces—5.5 percent of the warheads owned by Washington (eighty-five bombers, each equaling one warhead according to the New Start Treaty) and around 3 percent of those owned by Russia (approximately fifty bombers in service).

At first sight this is a very small share representing no significant contribution. Nevertheless, there is a “but”: although a strategic bomber is accounted for one warhead, in reality it carries many more. For example, the Russian Tu-160 “White Swan” (NATO reporting name: Blackjack) can carry up to twelve strategic cruise missiles with nuclear warheads; therefore, the real capacity of strategic bombers is not accurately expressed on paper. In general, though, they have both pros and cons over IСBMs. Among the advantages of bombers, one can mention a significant unpredictability of attack direction, the ability to change a combat mission in flight and the ability to use nonnuclear precision weapons in local and regional conflicts. As for the main drawback, one can name lower action speed during a strike-back—modern IСBMs require five minutes for pre-start preparation at most, which is not the case for aviation. On the other hand, when there are several aircraft on alert in the sky, it is almost impossible to destroy them with a preventive strike over the “home” territory. However, from a technical point of view, the interception of a bomber or cruise missile is currently more feasible than effective missile defense.

Let us now turn our attention to the parties’ strategic aviation in more detail, and compare the efficiency of their current weapons.

The United States: A “Ghost” Without Missiles and the “Good Old” B-52

According to U.S. Department of State data, as of January 1, 2016, there are currently twelve B-2 Spirit and seventy-three B-52H Stratofortress bombers on alert. There is yet another bomber, which was earlier classified as strategic—the B-1B Lancer—however, the aircraft had no possibility of carrying nuclear weapons and has been excluded from the list, for reasons we will discuss below.

Let us begin with the B-52H, which, despite its great age (the equipment currently in service was manufactured in the 1960s, so it is already over fifty years old) remains practically the only carrier of strategic cruise missiles in the U.S. Army. I am talking about AGM-86B ALCM missiles, whose air range is more than 2,400 kilometers. There are also precision nonnuclear modifications of these missiles in service, which hit their targets at a distance of up to 1,200 kilometers. This makes the B-52 the main nuclear deterrence aircraft.

As for the B-2 Spirit, the plane is the most high-tech and expensive bomber in the world. These aircraft were first put in service as early as 1994. A total of twenty-one vehicles were issued, followed by the end of production—the enormous price took its toll. Accounting for the design costs, the price of one B-2 is a fantastic $2.1 billion. For this money the United States obtained a Stealth vehicle with one of the lowest radar cross-section parameters (RCS); the lower this parameter is, the less conspicuous an object is for hostile radars. Moreover, there is some indirect information indicating that the RCS of the huge B-2 is lower than that of the small F-22 and F-35 Stealth fighters. Originally, this was planned to be used to enter a hostile air defense area for attack. However, modern Russian radars are able to detect targets of this type—lower observability only reduces the distance of detection, but does not exclude it completely. Given the fact that B-2s are equipped with free-fall nuclear bombs only, and carry no strategic cruise missiles, an effective deep attack on an opponent such as Russia seems extremely unlikely. For example, the Russian S-400 surface-to-air missile system detects “ordinary” targets at distances of up to six hundred kilometers. Even if the same B-2 is “seen” at a distance of only two hundred or one hundred kilometers, it will not manage to drop bombs in time. Contemporary and modernized fighters such as the Su-30SM, Su-35S and MiG-31BM can also be involved in pursuing “ghosts.” It is this fact that makes the B-2 a somewhat awkward aircraft: despite its record price, its actual role in a hypothetical global nuclear conflict would negligible. The aircraft is more suitable (and often used) for nonnuclear attacks in local conflicts.

Finally, a few words on the B-1B Lancer. This bomber, looking much like the Russian Tu-160 on the outside, did not come out as originally planned. It reaches no practically significant supersonic speeds; its highest possible speed is 1.25 Mach (i.e., 25 percent faster than the speed of sound). AGM-69 SRAM missiles, which were possible to carry by aircraft until 1990 (before they were removed from production), flew for only 160 kilometers, which was beyond any comparison with Soviet cruise missiles. Later, the aircraft carried nuclear free-fall bombs, subsequently not being able to carry nuclear weapons at all, and so being removed from the strategic weapons list. This is the reason why the B-1B is missing from the New Start Treaty lists. Nevertheless, it would be possible to return nuclear bombs onboard the aircraft if wished—this would hardly require serious modifications. Except another matter is that free-fall bombs are not easy to carry deep into Russian and Chinese territory, even for the B-2, let alone the B-1, for which doing so would be virtually impossible.

Speaking of prospects, a new strategic bomber is currently being developed as part of the Long Range Strike Bomber Program (LRS-B). A rough concept of the aircraft was revealed on February 27, 2016, by U.S. Secretary of the Air Force Deborah Lee James. The bomber, which received the identification B-21, will be built in the Flying Wing scheme, just like the B-2. The main requirements for the aircraft are even higher radar stealthiness and an adequate cost (the planned price per aircraft so far is $564 million). Northrop Grumman will receive a total of $80 billion for the development and production of one hundred new bombers. Production will start in the mid-2020s, at the earliest. The B-21 will have to replace the whole B-52H and B-1B fleet. The new bomber, apparently, will carry the advanced cruise missiles developed as part of the LRSO (long-range standoff weapon) program. Real information on when this weapon will be designed and which characteristics it will have is still absent.

Let us look at the Тu-95МS first. The basic version of the Тu-95 was put into USSR service as long ago as 1956. However, the early versions of the aircraft have all since been discarded. The modernized “Bears,” now in the Russian service, were issued during the period from 1981–92, that is, they are much “younger” than American B-52s. There are a total of sixty-four aircraft of this type, although around half of them are apparently in storage, with about thirty to thirty-five vehicles in service. The main Tu-95 weapon is the Kh-55SM cruise missile, with a maximum launch range of 3,500 kilometers. Moreover, the bomber’s modernization to the level of the Tu-95MSM (up to thirty-five vehicles) has started. The modernized missile carriers are able to use the latest Kh-101/102 cruise missiles, with nonnuclear or nuclear payloads, respectively. The new missile has advanced and unequalled characteristics: its maximum air range is 5,500 kilometers and filigree precision, and its circular error probable (CEP) is just five meters. Also, the missile is created with radar stealth technology. The nonnuclear Kh-101 has already been successfully applied in field conditions, in the Syrian conflict. Tu-95 carries eight cruise missiles, either Kh-55 or Kh-101/102. After modernization, the aircraft will serve for long enough, at least until the 2030s.

The most sophisticated Russian strategic bomber is the Tu-160. Presently, the Russian Air Force includes sixteen aircraft of this type. Its maximum flight speed is much higher than that of its American “twin” the B-1B, at 1.6 Mach. Moreover, the Tu-160 carries twelve strategic cruise missiles in its inner compartments. The same cruise missiles are used as on the Tu-95MS: the Kh-55 and the latest Kh-101/Kh-102. Aircraft of this type have started to undergo some modernization—they are receiving new equipment that allows for the use of precision nonnuclear weapons. Also, production renewal works for the “White Swan” are currently being performed, with deep modernization to the level of the Tu-160M2. The updated vehicle will have a completely new electronic “filling” and far exceed its predecessor’s abilities. The precise number of aircraft planned for construction is unknown so far, but there has been talk of fifty vehicles. Production, according to plan, will start in 2023.