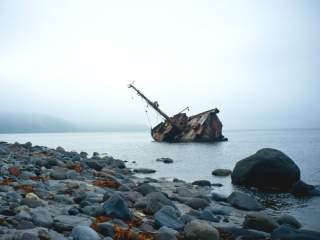 Over the past few years, attention on territorial issues in Asia has largely centered on China, which has a raft of disputes with its neighbors, including Japan and many countries in Southeast Asia. A less discussed, but still strategic, rift is that between Japan and Russia over the Southern Kuril Islands, which Japan often refers to as the Northern Territories. The Kurils are a chain of more than fifty islands that stretch north from Hokkaido in Japan to Kamchatka in Russia. The islands are currently administered by Moscow and have been under effective Russian control since the end of World War II, following the defeat of Japan. Tokyo, meanwhile, maintains its claim of sovereignty over four islands in the chain (Etorofu, Kunashiri, Shikotan and Habomai), claiming that the territories were illegally annexed by the Soviet Union following the war.

The islands are often cited for their value in terms of energy and resources, but they are also of key strategic importance. By that yardstick, the Kurils are more valuable to Russia than they are to Japan. These islands are important to Moscow because they preserve Russian naval access to the Western Pacific and play a critical role in Russia’s nuclear deterrence strategy. Unfortunately for Japan, because the islands’ strategic value to Russia has been only increasing in recent years, Russian willingness to compromise on the matter is likely to correspondingly decrease.

Russian military leaders believe that control of the Kurils is critical to maintain their Pacific Fleet’s access to the Pacific Ocean. The islands link the Sea of Okhotsk and the Pacific Ocean. Hence, Russian military leaders argue that they cannot give up the islands to Japan because doing so would reduce the Russian Pacific Fleet’s effectiveness and decrease Russia’s security, since Moscow would no longer have unfettered access to the open seas. This concern was an important motivation in Stalin’s decision to annex the Southern Kurils at the end of World War II.

Yet while maintaining access to the Pacific Ocean is a significant concern to Russia, this factor is only one reason the islands are so important strategically.

During the 1970s, the islands became even more valuable to Russia because of changes in the Soviet Union’s nuclear strategy—specifically, the development of the “bastion strategy.” A new generation of long-range missiles meant that the Soviets could keep their ballistic-missile submarines (SSBNs) in easily defensible “bastions,” such as the Sea of Okhotsk, and still reach targets on the United States’ West Coast. Under this new doctrine, which makes the protection of SSBNs in Petropavlovsk on Kamchatka the Pacific Fleet’s top priority, the Kurils became even more important to Russia. If Japan were to regain these islands, it would mean that U.S. submarines and carriers could enter the Sea of Okhotsk through Kunashiri Strait—and dramatically change the balance of power to the Soviet Union’s disadvantage. Washington’s emphasis on targeting Soviet SSBNs in the early 1980s also fueled the Soviet obsession with maintaining the islands to safeguard their “bastion.”

According to the Nuclear Threat Initiative, the number of Russian SSBNs had been steadily declining since the collapse of the Soviet Union. But due to the spike in oil revenue during the early 2000s, Russia’s military modernization project has gotten a boost, with a 150 percent increase in spending for strategic nuclear forces. Additionally, $160 billion was set aside to acquire new naval ships and submarines until 2020. As of June 2014, Russia’s strategic submarine fleet consisted of ten SSBNs, including six Delfin-class SSBNs, two Kalmar-class SSBNs, and two Borei-class SSBNs. In July 2015, USNI News reported that the planned class of eight Borei-class SSBNs would “serve as the backbone of the Russian sea-based nuclear deterrent force.”

The Borei-class SSBN are significantly quieter; however, it is not yet apparent that this is changing Russia’s calculations about deploying them out in the open ocean. In fact, in 2012, Russia’s nine-SSBN fleet carried out only five deterrent patrols, meaning that it is much more likely that Russia will continue to keep its SSBNs close to home and emphasize the protection of its bastions. Instead of sailing in the Pacific, the Boreis are most likely to be deployed near the Kamchatka Peninsula, where Russian attack submarines will do their best to defend the SSBNs from U.S. attack submarines. Even though hunting down Russian SSBNs is no longer a core component of U.S. maritime strategy, as it was in the 1980s, Russian military planners cannot ignore the possibility of such a U.S. mission. Therefore, even though the Borei is a more advanced vessel, it is expected to stay close to the same areas that its predecessors patrolled in the 1980s and 1990s.

There is concern that the recent trend towards greater concentration of Russian warheads onto fewer ships, as Russia transitions to a smaller but more warhead-heavy fleet of new submarines, will increase the likelihood of miscalculation by Russia. Not only does the concentration of more eggs in fewer baskets increase the risk of miscalculation, but it also increases the importance of protecting each individual SSBN—and if Russia chooses to concentrate them in the Sea of Okhotsk, then its willingness to return the islands to Japan exponentially decreases.

While it is easy to dismiss Japan and Russia’s conflict over the Kurils as political and nationalist posturing, at least from Russia’s perspective, there are tangible security interests at stake. Because the importance that Russia attaches to these islands is only increasing, due to the continued relevance of the bastion strategy, it is highly doubtful that Russia will be willing to compromise.

Pollmann is a recent graduate of Georgetown University and a columnist for the Diplomat. Miller is a fellow on East Asia for the EastWest Institute and director of the Council on International Policy.