Russian and America Media Polarization: Where It Comes From, Where It's Going 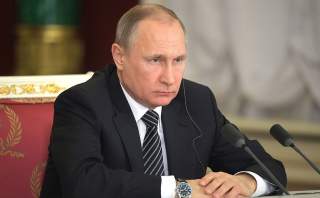 Both Russians and Republicans now seem to like each other more. These similar trends in both countries also have a common explanation: the structure of the media environment.

The recent tensions in U.S.-Russia relations made it popular for pundits to reflect on a “deeply seated Russian anti-Americanism.” Yet, despite those pessimistic forecasts, the late January poll by the Levada Center (the only truly independent polling company in Russia) shows that Russians have adopted a more positive view of the United States lately. More than a third of Russians now describe their attitude toward the United States as “very good” or “basically good”—an increase of 14 percentage points since January 2016. Although nearly half the Russian population still views the United States negatively, such an improvement may generally be a good sign for U.S.-Russia relations.

Russian optimism about the future of Russo-American relations peaked following the election of Donald Trump in November. Russian polls then indicated 54 percent of respondents were confident that relations with the United States would improve; however, that optimism waned to 46 percent after Trump was inaugurated in January. Still, Russians are demonstrably more hopeful now than they were when Barack Obama assumed the Oval Office in 2009, when just 30 percent thought the often tense bilateral relationship would thaw. The main reason for such optimism had to do with extensive pro-Trump coverage throughout the last year on the Russian state TV channels: Trump was portrayed as a president who would improve U.S.-Russia relations (63 percent of Russians thought so in November 2016). In light of his inauguration in January, Trump became the most frequently referenced person in Russian media, substantively surpassing mentions even of Putin himself (which hasn’t happened to the Russian president in several years). In February, Putin regained his leadership in Russian media references, but Donald Trump kept second place.

Even more unexpectedly (given the accusations of Russian hacking attacks), Americans are starting to view Russia more favorably. A February Gallup poll revealed that while in 2015 only 13 percent of Americans had a favorable opinion of Putin, 22 percent currently view him in a positive light. This increase was most significant among Republicans surveyed: from 12 percent in 2015 to 32 percent today. Americans are also of a slightly more favorable opinion toward Russia now (28 percent) as opposed to an all-time low back in 2015 (24 percent). Still, Republicans are much more positive about Russia than Democrats: 35 percent versus 16 percent, respectively.

The drastic fluctuations in the polls reveal that the foreign-policy preferences of everyday Russians are predominantly shaped by the state TV channels. In the case of Russia’s engagement in Syria, for example, the fluctuations in the public opinion almost perfectly reflected the state TV channels’ agenda. Within a month (from September to October 2015), attitudes toward the military engagement in Syria changed abruptly. In September, 69 percent of Russians opposed direct military help to Syrian president Bashar al-Assad, while by early October, 72 percent of Russians supported the bombing campaign in Syria. In early October 2015, 46 percent thought the Syria engagement might lead to “a new Afghanistan” (a decade-long war often termed the Soviet Union’s Vietnam War, due to the losses on the Soviet side)—but only 11 percent thought so a month later. Hence, in a month the Kremlin was able to shift Russian public opinion from dislike to support for a war.

The same explanations hold for the case of Russian anti-Americanism: Russians express the message they receive from state TV channels almost verbatim, repeating the clichés of Russia-24 and Channel One about “fascists,” “Bandera” and crucified children. The Russian state television has been remarkably supportive of Trump since at least summer 2016; they’ve provided overwhelmingly positive coverage of him and his campaign, and celebrated his election and inauguration. The attention devoted to the positive coverage of the Trump presidency has been so high that Russians named Trump’s inauguration the most memorable event of the past four weeks (ahead of the Christmas and New Year’s holidays, and Russia’s Defense Ministry airplane crush that lead to the deaths of numerous Russian public figures). The pro-Trump and pro-American shift in Russian state TV coverage is behind the change in Russian public opinion about the United States, which is now being revealed in polls. But the overall change in polling trends had already started in 2015, when the Kremlin first attempted to improve its relations with the United States damaged by the Ukrainian conflict—shifting the media agenda accordingly.

The Kremlin’s ability to shape its country’s geopolitical attitudes is largely due to its shaping of the media environment. Nine out of every ten Russians consistently name television as their primary source of domestic and foreign news. Almost half of all Russians use only one information source, and 85 percent watch only television, primarily the three state-controlled channels: Channel One, Russia-24 and NTV (the combined audience of relatively independent TV stations is below 20 percent). The Kremlin hence possesses an almost unlimited monopoly on shaping Russians’ geopolitical views as it pleases, and used its TV dominance to influence Russians into liking Donald Trump more.

How about the internet, one could ask? Unlike television, where Russians largely have no choice about what to watch (all main TV channels are state-controlled and communicate the Kremlin agenda), the internet allows access to different news sources. The problem with the internet is that people whose views are already shaped tend to look on the web for the information that fits better in their predetermined worldview. Even those who follow news from a variety of different sources are still very similar to the “ordinary” Russian in their approval of the existing government and the state of affairs in the country, and in their attitude to prominent events.

In Russia, the information bubble is artificially created by state control over the main TV channels, while in the United States it is an unintended consequence of social polarization. The Russian example has demonstrated that such a bubble risks making the public supportive of any kind of executive agenda, including backing a country’s participation in multiple conflicts. This is a state of affairs that Americans should ponder as well.