Russian Bombers in Iran Are a Symbol, Not a Strategy 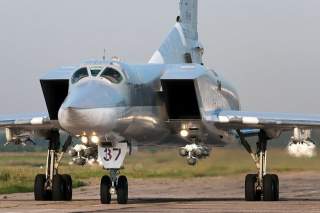 There has been a tremendous amount of press coverage devoted to the initiation earlier this week of Russian bombers flying missions over Syria from a base in Iran. But what exactly has changed?

For the Syrians on the receiving end of these missions, the fact that Russian bombers are coming from Iran instead of farther-away southern Russia does not change the fact that they are still being bombed.

Nor is it clear that bombing missions originating in Iran will do much more (despite the fact that the shorter distance allows them to carry less fuel and more bombs) than ones originating in Russia to help Moscow and Tehran defeat the opposition to the Assad regime in Syria.

It has been observed in many other conflicts that aerial bombardment alone is insufficient to defeat an insurgency. Syria is not an exception. As elsewhere, a much costlier and time-consuming ground force campaign will be needed to defeat it. And there is no guarantee, of course, that this will work either.

Putin has made it clear that he has no intention of sending large-scale Russian ground forces to fight a counterinsurgency battle in Syria. Iranian forces, along with Hezbollah and other Shia militias, are already doing this there. But while Russia, Iran and their militia allies have succeeded in propping up the Assad regime, they have been unable to defeat its many opponents. It would not be surprising if Tehran is frustrated by this—as well as by the fact that Russia is not sharing the burden of the ground war in Syria with Iran. Russian bombers flying missions over Syria from Iran, then, may be more of an expression of Russian solidarity with Iran than a meaningful military move.

But whether Moscow sends its bombers to Syria from Iran instead of southern Russia may not have an appreciable influence on the conflict inside Syria, the impact of doing so on the international relations of the conflict may be greater. Several of the Arab Gulf monarchies have hoped that by offering to increase their economic ties with Russia, they could move Moscow away from Tehran on Syria. Russia flying its bombers out of Iran, though, suggests that this hope is unfounded. Indeed, an Iranian desire to create just such an impression may have motivated Tehran to allow them. Similarly, while Turkish president Erdoğan made clear that he still wants Assad to step down and hoped that improved Russian-Turkish ties would nudge Moscow toward accommodating Ankara on Syria, Putin’s actions indicate that Moscow is siding with Iran here.

In addition, Israeli leaders who want to believe Moscow’s line that the Russian presence in Syria benefits Israel by deterring Iran and Hezbollah from attacking the Jewish state will not be reassured by increased Russian-Iranian military collaboration. Nor will this bolster the hopes of those in Washington that Russia is more willing than Iran to work with the United States to somehow bring a peaceable end to the conflict in Syria.

Moscow may feel that it has no reason to worry about Western or regional disappointment with its increased collaboration with Iran in bombing Syria, especially at a time when so many other governments have been courting Russia. Indeed, the argument that everyone will need to work with Russia over Syria may appear increasingly compelling in Moscow. The problem with this argument, though, is that it may only be persuasive elsewhere if there is belief in the possibility that Russia can and will push Iran and the Assad regime to accept a settlement that outside powers and a significant part of the Syrian opposition will also accept. But if it comes to be seen that Russia is as determined as Tehran and the Assad regime to try to defeat the Syrian opposition, then any hopes about the possibility of working with Russia—which Moscow has very much encouraged—will fade.

The disillusionment of these hopes for “working with Russia on Syria” would not matter to the Kremlin if Moscow, Tehran and Damascus could indeed defeat the Syrian opposition. But so far, they have been unable to. Indeed, the vigorous attempt to defeat them without any prospect of a settlement that they would find acceptable has only resulted in increased internal resistance to Assad. So long as this internal resistance continues, it will be supported by at least some external powers like Saudi Arabia and probably Turkey. And so the situation will remain the same for all parties—whether or not Russian bombers take off from Iran or elsewhere.

Mark N. Katz is a professor in the Schar School of Policy and Government at George Mason University, and a non-resident fellow at the Arab Gulf States Institute in Washington.