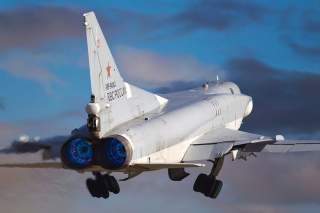 For the first time since 1979, Iran has given a foreign power the right to conduct military operations from its soil. Russia is now operating Tu-22M3 long-range bombers from an Iranian airbase. The purported goal is only limited to joint Iranian-Russian operations against anti-Assad rebels inside Syria. But while an Iranian-Russian partnership to keep President Bashar al-Assad alive has been in place as long as the Syrian war has raged, this latest upswing in military collaboration might be a prelude to a greater strategic pivot. It can have far-reaching consequences not only impacting Iranian and Russian foreign policies, but also American interests in the broader Middle East. This newfound Iranian-Russian tie-up, however, is not new, nor should its latest blossoming come as a surprise.

Immediately after the 1979 Iranian Revolution, students in Iran were instructed each morning to chant slogans in support of the new ruler, Ayatollah Ruhollah Khomeini. They also had to chant “Neither West nor East but the Islamic Republic.” The Islamist regime that emerged following the toppling of the pro-American Shah was very determined to sell itself as an independent alternative that was not to do the bidding of either the Capitalist West or the Communist East.

In reality, while the United States was forced to leave Iran, Moscow and its [then Soviet] agents stayed put. In fact, in the chaotic early days after the revolution, when one political party after another was banned or violently repressed, the Tudeh [Communist] party of Iran was initially left alone until it faced a crackdown in 1983. It was widely considered as a concession to Moscow and an earliest sign of Iranian acceptance that shunning both superpowers at the same time was simply unworkable.

Shortly after the revolution, Iran’s new rulers began to dispatch teams of military and intelligence officers to countries in the Soviet bloc—Romania, Bulgaria, East Germany—to learn the crafts of warfare and intelligence operations. These officers returned to Iran and have since played a big part in keeping the Islamic Republic safe from any internal threat to the Islamic Republic.

The Iranian people have always known of Russia’s role in shoring up the rule of the ayatollahs, as evidenced in the chants of “death to Russia” during the 2009 opposition mass protests. From providing submarines to Iran in the 1990s, to building the country’s first nuclear plant, to training its cyber warriors, to the recent decision to ship to Iran the strategic S-300 anti-air systems, Moscow has done enough to keep at least some friends in Tehran.

Nonetheless, Iranian opinions on Russia still vary. If you ask the generals from the Islamic Revolution Guards Corps (IRGC)—Moscow’s accomplices in the Syrian war—you will mostly hear praise. Phrases such as “strategic overlap” and “the fight against terrorism” is mentioned as the common ground with Russia. However, it is not always an easy relationship to justify. The IRGC, which portrays itself as a revolutionary Islamic force, was tellingly silent throughout Moscow’s military campaigns in Chechnya, a Muslim republic in Russia that was fighting for independence. For the IRGC, it is the flow of Russian arms, intelligence cooperation and other practical benefits that Moscow offers which make it a special partner. If Iran’s Islamist credentials take a dent in the process, so be it.

The IRGC’s key rival inside the Islamic Republic, the moderate government of President Hassan Rouhani, has a far less rosy view of Russia, and it is not beholden to Moscow as a transactional partner as is the IRGC top brass. The Rouhani team has largely looked at the new U.S.-Russian cold war following the fallout from the annexation of Crimea as an opportunity to push its own agenda - not as an opportunity to move closer to Moscow per se, but to play the Russia card as a way to prod Washington to reassess its overall posture toward Iran. Rouhani’s key goal is the transformation of the Iranian economy, and it recognizes the United States as a pivotal obstacle that one way or another has to be placated. The IRGC generals do not share this view, and claim legitimacy is based not on how many jobs they can create, but on military prowess in the many conflicts around the Middle East.

Nonetheless, both camps in Tehran quietly agree that Russia has historically taken far more from Iran than it has ever contributed to its national interests. In recent years, the Russians upset the Iranians to no end by voting repeatedly against Tehran’s nuclear file at the United Nations; by deliberately delaying the completion of the Bushehr nuclear plant as Moscow sought to use Iran as a pawn in its broader talks with Washington; and by systematically absorbing Iran’s global oil market share when the country was under sanctions. And yet for the hardliners in the ranks of the IRGC and elsewhere in the Iranian regime, the Rouhani government’s proclivity to favor the West over the East is more ominous.

They see Rouhani as a man who might look to cut more deals with Washington at the expense of the influence and agenda of the hardline camp. Moscow’s ability to find a way to fly its bombers out of an Iranian airbase has to be seen in the context of this power struggle in Tehran. From Washington’s perspective, the question is whether this Iranian-Russian military cooperation poses a fundamental test to U.S. interests in the Middle East. It has had plenty of time to ponder this question. Iran and Russia signed a military cooperation agreement in January 2015, which has so far been met by little response of any kind from Washington. The United States might see this mounting Tehran-Moscow axis as a cursory build-up. That is not necessarily how U.S. allies in the Middle East will see it, and that alone should matter to Washington.

Alex Vatanka is a Senior Fellow at the Middle East Institute and The Jamestown Foundation in Washington. Follow him @AlexVatanka.