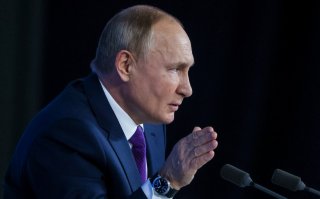 Vladimir Putin, the “Tsar of Brinkmanship,” is escalating pressure on Ukraine and its NATO supporters on a scale well beyond the events in 2014, not unlike how Nikita Khrushchev used to squeeze West Berlin. In recent months, Russia has been massing a deployment of joint forces significantly more capable and exceeding 100,000 troops, five to ten times the size of the combat battalions available in 2014-2015. Moscow is signaling it will not give up Ukraine without a fight. In a well-publicized November speech to senior Foreign Ministry officials, Putin warned that although NATO continues to ignore Russia’s “red lines” about not bringing its “military infrastructure” “next to our borders,” the “tension” created by Russia’s brinkmanship is now producing “a certain effect.” Putin asserted “it is necessary that this state persists for them as long as possible” until they reverse course and provide Russia with long-term security guarantees.

On cue, the Foreign Ministry handed to the Biden administration last week and published on their website Moscow’s far-reaching demands—which include rescinding a 2008 commitment to Ukraine and Georgia that they would one day join NATO, banning all new weapons and force deployments in eastern Europe, and negotiation of a new treaty on European security. Although NATO’s pledge to these former Soviet republics was a strategic blunder that depended on Russia never recovering the power and will to contest it, the United States and its allies can never back down under such pressure. Even if talks begin to search for a mutually acceptable bargain, Russia’s military timeline to run offensive operations against Ukraine is shorter than any plausible space for diplomacy, demonstrating that the Kremlin is preparing to go to the wall.

For Putin, like Khrushchev, a competition in risk-taking appears to offer a beguiling opportunity to solve multiple international and domestic challenges simultaneously, forcing others to compromise in unwanted tests of wills. Putin is clearly dissatisfied with Ukrainian president Volodymyr Zelensky’s unwillingness to deliver policies favorable to Moscow, the failure of the Minsk process to reboot Russia’s influence in Ukraine, and the growing military role of the United States and other Western countries in and around Ukraine, despite its nonmember status in NATO. For the Kremlin, Ukraine has also become the pivot point to redress Russia’s lost structural power in matters of European security. There is no later point in Putin’s thinking; it’s now or all will be lost forever.

The Ukraine crisis resembles Khrushchev’s confrontation with a West German leadership bolstered by economic recovery, increasingly serious in its nuclear ambitions, and eager for reunification on Western terms. Khrushchev also faced challenges to his authority at home and elsewhere in the communist world. Putin, similarly, seems to be worried that a Ukraine anchored in the West will eventually become a prosperous democratic country and lead Russians to challenge their own stagnating crony capitalist system. Like Khrushchev, Putin has also staked his domestic legitimacy, in part, on geopolitical reversals of fortune, first Crimea, and now undoing the terms of European security. For the West, leaving Ukraine in limbo was as much a mistake as leaving West Berlin as an indefensible outpost.

The Kremlin’s determination to stop the advance of Euro-Atlantic institutions was signaled in a smaller campaign against Georgia in 2008 before Russia moved to fracture Ukraine and seize Crimea. Although Western policymakers expected that Russia’s arrangements with transatlantic institutions like the 1997 NATO-Russia Founding Act would promote stability, Moscow could never permanently accept a minuscule “limited relationship“ with the expanding Euro-Atlantic institutions of NATO and the EU that dominated the continent and were controlled by other powerful actors, not Russia. Putin stiffly repeated this week his 2014 warning that “We have reached a point beyond which we cannot retreat.”

The trend line of closer military, political, and economic associations between Kyiv and Washington and other Western countries, even in the absence of a NATO membership action plan, is the final straw. The Kremlin fears the United States, in particular, is creating facts on the ground, in the air, and in the seas that give the impression that America’s stakes in this region rival those of Russia’s. This would represent a major departure from President Barack Obama’s opposite conclusion that “Ukraine is going to be vulnerable to military domination by Russia no matter what we do” because Russia has higher stakes there. Obama explained that “we have to be very clear about what our core interests are and what we are willing to go to war for” although “there’s always going to be some ambiguity.” This time around, with U.S. domestic politics scarred by Russia’s gray area influence operations and the ongoing war in Ukraine, Washington feels more committed to Ukraine and wants to frighten Putin into believing his brinkmanship will boomerang, but that outcome is far from certain. The Biden administration talks about the spigot of arms flowing to Ukraine, but there is no mention that Americans will fight to uphold Ukraine’s sovereignty as a fellow democracy, despite assurances provided to Kyiv in 1994 in exchange for it giving up the nuclear arsenal it inherited when the USSR collapsed.

As Thomas Schelling explains, brinkmanship “is the tactic of deliberately letting the situation get somewhat out of hand, just because its being out of hand may be intolerable to the other party and force his accommodation.” Schelling would describe the dynamic that Putin has imposed in Ukraine as the “rationality of irrationality”: Putin has been purposefully generating risk and “exploiting the danger that somebody may inadvertently go over the brink, dragging the other with him.”

Moscow expects to demonstrate not that it possesses greater aggregate power than the United States and Ukraine’s other Western partners, but that it is more willing to commit the power needed to achieve its objectives. Although the Kremlin prefers to avoid a costly protracted war, it is signaling a willingness to fight to deny Ukraine complete autonomy in its international policies and to deny Kyiv’s Western partners a new transatlantic beachhead on Russia’s western border.

A casus belli can always be found, and a one-on-one fight involving Russia against Ukraine is not likely to go well for Kyiv on the battlefield; even Ukraine’s generals fear they would be “overwhelmed.”

In March 2015, a year after the annexation of Crimea, Putin signaled during a television broadcast that he had been ready to raise the alert level of Russian nuclear forces to ensure the West did not intervene. Even discounting Putin’s nuclear saber-rattling, Russia has plausible horizontal escalation options both to deter direct Western intervention and to retaliate against Western economic sanctions. Moscow would likely consider proportionate escalation to include cyber-attacks on critical civilian infrastructure or against the U.S. financial sector.

Unwilling to commit U.S. forces, the Biden administration has resurrected Obama’s deterrence playbook, but in changed conditions. Washington is probably miscalculating that threats of punishing financial sanctions will deter Russian military escalation. Coercion by punishment, including by sanctions, rarely succeeds. The International Monetary Fund estimated in 2019 that sanctions had curbed Russian growth by 0.2 percentage points between 2014 and 2018, but Russia is unlikely to ever willingly relinquish Crimea. Washington has also threatened more extreme sanctions, such as turning off Russia’s access to the SWIFT financial messaging system, targeting the issuance of sovereign debt and the full range of derivative products, and hitting Russian banks. The transatlantic community also warns that Russia’s Nord Stream 2 pipeline to Germany may be closed down.

The problem is that current policymakers exaggerate the impact that such threats had on dissuading Putin from expanding the war against Ukraine in 2014-15. The Kremlin was then assimilating new information about the lack of enthusiasm among eastern Ukrainians to fight alongside the Russian-supported separatists in support of restoring Novorossiya. There were additional concerns about the likelihood of Russian popular opposition in the event of high casualties. Today, Putin is still not unconstrained domestically, but the impact of higher levels of repression and censorship should not be discounted. U.S. policies that wound the Russian economy would also likely generate perverse outcomes, such as allowing the regime to shift the blame for the economic downturn to the West and perhaps encouraging Putin to move further to the right and incorporate extreme nationalists in his ruling coalition.

World leaders have historically struggled with such questions of geoeconomics. The Prussian leader Otto von Bismarck thought that lack of capital would not make Russia more peaceful. Bismarck was only partly exaggerating when he claimed that the Russians would “spend the necessary money for railways and wars whether they have it or not.” Throughout its history, Russia’s most notable liberal finance ministers—from Mikhail von Reutern (under Alexander II) to Aleksei Kudrin (under Putin) have battled the nexus of interests pushing protectionist, military-industrial and imperial expansion winning a few policy struggles while usually losing the long game.

Putin fits the pattern of Russian rulers who have prioritized military-industry and resource dominance ahead of rational economic development. This pattern is integrated into Putin’s personalist autocratic system and Moscow’s attachment to the role of ambitious great power. Like Joseph Stalin, Putin is convinced that the weak get beaten, not just on the battlefield but in every domain of major power competition. Moreover, the Russian defense sector, as other parts of the economy’s commanding heights, is largely owned and run by regime insiders and not easily coerced by sanctions. Thus, it’s puzzling why the former director of the U.S. Treasury Department’s Office of Foreign Assets Control still asserts that the United States should sanction Russian oligarchs to “increasingly pressure a regime to change its behavior by picking off those people who support” it.