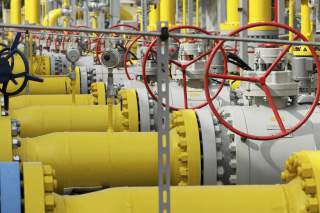 A reinvigorated discussion of Russia’s energy policy in Europe has recently become part of the debate in Washington over new sanctions against Moscow. This discussion is worth having: on the one hand, it shows that not everybody in Europe considers energy cooperation with Russia harmful or dangerous. On the other, the argument reminds us that Russia’s energy expansion in Europe is, to a significant degree, based on economic reasoning rather than political doctrine.

Anybody who has seen a pipe knows that it has two ends. Accordingly, any pipeline built to bring Russian natural gas to Europe is meant to bind together the two sides of the transaction—Russia and its customers in Europe. Disciples of the “energy weapon” theory can forever discuss past interruptions of Russian natural-gas deliveries to Europe caused by arguments between Moscow and Kiev. This cannot change the fact that any such interruption deprives not only Europe of Russian gas, but it also deprives Moscow of profits from gas sales. So far, nobody has suggested what Russia’s goals are in using this alleged “energy weapon.” Is it to lose billions of rubles in revenue for the national budget? Is it to undermine Russian credibility as an energy exporter, putting future revenue into question?

Russia has decreased its dependency on these revenues in the last decade, but it is still impossible for the Kremlin to go without them. This explains why Russia’s leadership, including President Vladimir Putin, has been so active in securing a future for Russian-European energy cooperation. Last month Putin himself launched the alignment of the shallow- and deep-water sections of the Turkish Stream gas pipeline. The interest on the other side of this cooperation is no smaller: Germany’s foreign minister and Austria’s chancellor issued a rare and fierce warning against possible American sanctions connected with the Nord Stream 2 pipeline.

Of course, American opposition to that pipeline, as well as other projects bringing more Russian natural gas to Europe, is understandable. Beyond the surface of geopolitical rhetoric, Washington aspires to send more American LNG to Europe. However, one can argue that the best way to advance these American economic interests is to use economic arguments, rather than political scaremongering and means of pressure such as sanctions. Are Europeans buying Russian natural gas because they are fans of Russia or its president?

Likewise, explaining European demand for Russian gas by pointing to Europe’s lack of options is also an oversimplification. Europeans had several decades to find and develop alternatives to Russian gas; they have not done so, because Russia remains an attractive source for gas. Other options are either unreliable or require investments in amounts that make these sources too expensive compared to Russian gas.

If Washington wants to truly and sustainably reduce the demand for Russian gas in Europe, the best way to achieve it is to economically support diversification, or to outright invest in it. The latter will be very expensive. Besides enormous investments in LNG ports and infrastructure in Europe, American policymakers must find ways to guarantee deliveries of domestic LNG to Europe, instead of Asia where LNG is more expensive and therefore more profitable. Furthermore, Europeans might need help to pay for American LNG, which can be significantly more expensive than Russian pipeline gas.

With their plates full, decisionmakers in Washington do not need such a policy headache added to their agenda. And without a large-scale economic intervention from the United States, the situation will not change much—Russian natural gas will remain attractive for large parts of Europe. It is worth emphasizing that, when convenient, the Europeans have always bought natural gas from sources other than Russia.

In fact, Europe is currently already buying LNG from the United States. However, there is a significant gap between the growing deliveries of American LNG and the drastically falling consumption of Russian pipeline gas. Furthermore, when considering diversification as a core component of European energy security, it is important to understand that Russian gas will inevitably remain part of the mix. For the foreseeable future, contracts for Russian pipeline gas guarantee that European energy demand will be satisfied.

Likewise, Moscow needs Europe to maintain diversity in order to preserve demand for its gas. It would be very shortsighted for Russia to completely switch its supply from Europe to Asia; doing so could lead to dependency on Asian customers dictating prices. That is the reason why Moscow is not only developing its capacity to reach European customers, but also emphasizing its readiness to fulfil European regulators’ demands. Whatever the broader geopolitical context, Europe and Russia tend to find compromises and solutions that allow energy cooperation to continue.

If the United States enters this dialog armed with sanctions and trying to advance the interests of American LNG exporters without an economic policy to back it up, Europe’s energy situation will be destabilized. It is difficult to see how such destabilization, followed by broader negative effects for European economies, would benefit the United States. That is why American sanctions against Russian energy supplies to Europe should be considered very carefully.