Russian Jet Down in Turkey: Misstep or Game-Changer? 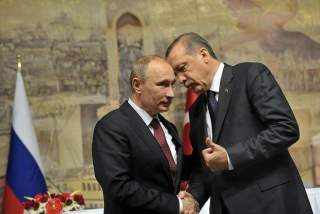 As we continue to gather more information on the shoot-down of a Russian aircraft by Turkish planes, the incident forces not only Russia and Turkey but all NATO countries (including the United States) as well as other regional players to reconsider their positions and assumptions. Over the coming hours, days and weeks, we will have a better sense of whether this will be treated as a tragic mistake or whether it will be seen as a game-changer that alters the trajectory of the Syrian conflict and Russia's relationship with the West.

In the immediate aftermath, whatever progress Presidents Vladimir Putin and Recep Tayyip Erdogan achieved on the sidelines of the Antalya G-20 summit is now completely lost. Foreign Minister Sergei Lavrov's trip to Turkey, which was designed to get the Turkish-Russian agenda back on track, has now been cancelled. The shoot-down may prove to be the final nail in the coffin of a losing four-year attempt by both Russia and Turkey to find a way to compartmentalize their deep disagreements over Syria from infringing upon a very lucrative economic relationship between the two countries. Putin's comments about a "stab in the back," and Erdogan's own clear statements that Turkey will not stand by any infringement of its airspace, suggest that a rapid move by both sides to offer apologies and to put the incident behind them seem to signal that this incident will continue to have negative consequences for the relationship.

This is also proving to be a critical test of NATO's commitment. Certainly, NATO countries, starting with the United States, are calling for de-escalation of the situation and for both sides to refrain from provocation. Beyond that, however, will NATO members unequivocally back all necessary measures to deter Russia from retaliation or from any incursions into Turkish territory? Or will the alliance fracture on this question, with some countries arguing that Turkey's own actions in Syria do not give it the right to call on the alliance for immunity? Given the growing uncertainty among some NATO members, particularly in the Baltic States, about the degree to which other alliance members would honor their treaty commitments should they get into entanglements with Russia, what NATO does in the coming days will be important for determining the future relevance of the alliance. It will also be important because with the potential for more incidents of this support miscalculations could easily spiral out of control.

The shootdown also calls into question French President François Hollande's vision of using the struggle against ISIS as a way to knit together a grand anti-terror coalition. Presumably, Putin will ask Hollande when they meet in Moscow on Thursday how Russia can take part in strikes against the Islamic State if France's NATO ally will be targeting Russian aircraft. In turn, this is likely to have negative ramifications for France's efforts to craft a UN Security Council resolution as the international legal basis for common action against ISIS—given Russia's past insistence that other rebel groups operating against the Assad government also be covered in any anti-ISIS mandate.

French officials were hoping, in the wake of the downed civilian Russian airliner over Sinai and the attacks in Paris, that Moscow would be prepared to shift its focus in Syria from defending the Assad regime to taking the fight to ISIS. There had also been indications that Moscow was cautiously exploring with Western diplomats, Turkey and Saudi Arabia the possibility of a settlement in Syria that would provide for the eventual departure of Assad from power. Now, Moscow may swing back towards Iran's preferences of further action to entrench Assad's control over the key parts of Syria that he needs for regime survival—something that Assad has started to do in recent days, with forces backed by Russian helicopter gunships and additional fighters provided by Hezbollah and the Iranian Revolutionary Guards.

Over the last week, there was guarded optimism that the different players in Syria were beginning to search out possible compromises that could lead to a settlement of the civil war and a singular focus on ISIS. Whether this incident will be viewed as a tragic outlier, or whether it derails that process altogether, is still unclear. President Hollande's press conference in Moscow on Thursday may provide the critical answer.