Russian Spy's Poisoning: Where Does PM May Go from Here? 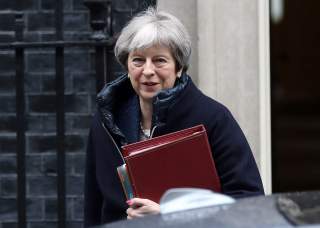 Russia’s apparent attempt to murder Sergei Skripal in the United Kingdom leaves Her Majesty’s Government (HMG) with no good choices. Unlike the murder of Alexander Litvinenko in 2006, this time around, London had no choice but rapidly and publicly to accuse the Russian Federation of either incompetence in losing control of a nerve agent it invented or attempted murder on British soil. The timing of Mrs. May’s ultimatum for a diplomatic response from the Russian ambassador clearly means that she must announce at least initial steps to respond to the attempt on Skripal’s life at her weekly appearance before Parliament—‘Prime Minister’s Question Time’—at noon on Wednesday.

As is its wont, the United Kingdom undoubtedly would have preferred a methodical investigation with no leaks and an announcement of findings in due course. In that case their greatest fear would have been a leak from their American partners, as has happened consistently in the past. But unlike in the Litvinenko case, too much of the public was exposed—at least potentially—to this attempt on Skripal’s life, requiring HMG to show its own public, likely against the investigators’ better judgment, that it was moving quickly to protect them.

The actual measures to be taken are also unpalatable. A tit-for-tat spy expulsion risks leaving London poorly informed about events in Russia as well as potential terrorist threats against the United Kingdom or its interests that might emanate from the Russian Caucasus or other areas where the Russian security services might have influence or sources of information.

But the most punitive option—and the one for which the British media in their usually restrained way is clamoring—would be financial and travel sanctions on Russians either living in the United Kingdom or using the City of London as their preferred location to hold substantial assets, to live and frequently to educate their children. With Brexit already weighing heavily on ‘the City,’ as London’s financial district is known, May will be looking to make common cause with the United States and the UK’s estranged European partners so that the City does not travel the sanctions path alone. In today’s climate, that argument will be more difficult to make than normal. With May’s precarious government dependent on a small Northern Ireland party and Labour in no mood to come to throw her a lifeline, one should not envy Mrs. May’s position.

Amb. David Johnson is Vice President of Washington Operations for Janus Global Operations. He is also a member of the UN’s International Narcotics Control Board, and is a former career diplomat, having served as Assistant Secretary of State for International Narcotics and Law Enforcement Affairs; Minister at the U.S. Embassy in London; U.S. Afghan Coordinator; and U.S. Ambassador to the Organization for Security and Cooperation in Europe.