A Russian View on America’s Withdrawal from the Iran Deal 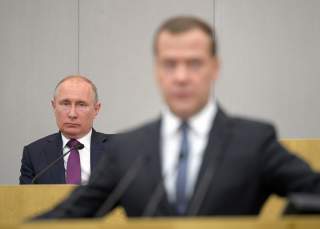 Russia is acting deeply disappointed in public. In response to Trump’s decision to withdraw from the Joint Comprehensive Plan of Action (JCPOA), the Russian Ministry of Foreign Affairs issued a statement blaming the United States for “intractable” actions based on “narrow and opportunistic interests.” The Kremlin expressed “deep concern” over the American decision and stressed the necessity to sustain the agreement. Last week, Foreign Minister Sergey Lavrov was in chain talks with European leaders discussing ways to save the deal without the United States.

But Moscow was the least vocal among the dissatisfied—since no Russian vital interests are at stake and some actual benefits emerge. Consider this: after America’s abrupt exit, Iran suddenly looks good. Uncertainty over tensions force oil prices to go up. Europe is now more distrustful towards Washington and turmoil among NATO allies is inevitable. Iran was not benefiting economically from the JCPOA, but in these new circumstances, Europe can disregard American threats of imposing secondary sanctions and do business with Tehran.

The most important question that remains: can the Trump withdrawal be a pretext for a war or a military strike against Iran? Moscow does not consider this an immediate threat. Trump would hardly risk starting another war in the Middle East—even if some in his administration see Iran as an easy target. A “Hit and Tweet Strategy” is more likely, but global and regional security implications would arrive after just one euphoric news cycle. Cornering Iran, while pleasing Israel and Saudi Arabia, would not help regional security—but at least war is not imminent. Moscow considers Trump’s decision to be focused on domestic politics, hoping that it resonates with Republicans and makes the president look strong.

If this analysis is correct, Russia does not need to comment on the American departure from the JCPOA. Moscow would opt for maintaining the deal with Europe and China, letting Washington absorb the diplomatic fallout.

But emotions in Moscow about Trump’s move are riddled with fascination and curiosity. Observers find it puzzling, wondering how long international security will be a victim to American domestic politics. Many also wonder why the leader of the “free world” is permitted to behave like a cowboy. From the Russian perspective, Trump’s move is just another sign of the hypocritical nature of the Western “rules based” order. Moscow believes this order lost any moral legitimacy long ago. Now, the Kremlin is sitting back and observing the EU’s reaction with popcorn, wondering how the EU can maintain transatlantic solidarity in the face of an American betrayal. European threats to ostracize the United States, however, would likely amount to nothing.

In the current diplomatic crisis, Russia sees what it had forecasting long ago: the emergence of a multipolar world, the dissolution of Western solidarity and return of great power politics. Russians believe that America has “normalized” and returned to its unilateral instincts. This belief implies that the United States is an unreliable negotiator—but Russians knew that long before. Moscow’s list of grievances with Washington is longer than that of Europe—even as Europeans fume at the United States for leaving the Iran deal, the Trans Pacific Partnership (TPP) and the Paris Climate Agreement. Instead, Russia focuses on America’s “irresponsible moves” regarding arms control regimes (including in cyber and space) and regional conflicts (primarily in Syria and Ukraine).

If this the new normal for the United States, what is next for U.S. alliance politics? Since the 1953 Basic National Security Policy (NSC 162/2), America’s key foreign policy interest has been to maintain solidarity and share the burden of deterring the Soviet Union with Europe and Japan. The logic of the time was to unite the efforts of the four power centers—Germany, Great Britain, Japan and the United States—against the Soviets. In the last decade, America’s constant unilateral moves have shaken the foundation of this strategy. It is good news for Russia, since no single threat that requires full mobilization of America’s allies.

Moscow was striving for multipolarity—and here it is. Every nation is on its own. This does not mean that the world has become a safer place. It is a step toward more equilibrium in global politics, with classical power relations back in vogue. Moscow excels in this game and prefers it over unipolarity.

Andrey Sushentsov is program director of the Valdai Club Foundation and founder and head of the Foreign Policy Advisory Group.