Russia's 5 Most Lethal Weapons of War in the Water 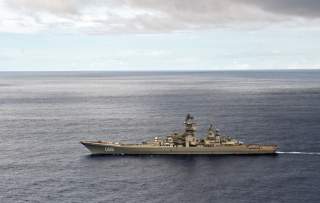 Editor’s Note: Please take a look at previous works from our “Weapons of War” series including the Russia’s Military is Back, Russia’s Navy Rising, the Five Best Weapons of War from the Soviet Union, and The Five Most Powerful Russian Weapons of War in the Sky.

At the time of its breakup, the Soviet Union had the largest navy in the world. After the breakup of the USSR in 1991, Russia inherited the bulk of the Soviet Navy. This didn’t do Russia any great favors as her economy could not support a large fleet. Large numbers of ships, planes and submarines were cast aside, or simply tied up at the dock to rust.

Like the rest of the Russian military, what has emerged nearly twenty-five years later is a service equipped with a mix of old, familiar and new. Veterans of the Soviet Navy serve alongside updated designs. There are even completely new ships coming online. With that in mind, here are the five most lethal Russian weapons of war on the water.

The Russian ballistic missile fleet is in trouble. Not a single ship has been built since the end of the Soviet Union—most were built in the 1980s. Only one, Novomoskovsk, has actually been commissioned by Russia, and that was in 1992. Russia’s Pacific Fleet is the worst off, relying on Delta-III class subs produced between 1979 and 1982.

Enter the Borei-class of nuclear ballistic missile submarines. At 14,700 tons surfaced the Borei submarines are slightly smaller than the gigantic Typhoon class. Eight will be built, replacing the older Delta-III, Delta IV, and Typhoon class subs currently in service. Four will serve with the Northern Fleet and four with the Pacific Fleet.

The Borei class, which had been in development at the end of the Cold War, was delayed due to a lack of funding. The first submarine, Yuri Dolgoruky, was finally commissioned into the Russian Navy on January 10, 2013. Three ships have been launched. Construction is being performed by the Sevmash shipyard, which recently completed the transformation of the Indian aircraft carrier Vikramaditya.

The class will carry sixteen Bulava submarine launched ballistic missiles, each in turn with 6-10 warheads, for a total of 96 to 196 warheads per submarine. Missile Threat pegs the missile's range at up to 8,300 kilometers. This means submarines in the Barents Sea and Sea of Okhotsk—where the Russian Fleet hides its ballistic missile submarines—could reach any point in the continental United States.

Bulava, has had a difficult development period, with just over 40 percent of its twenty-one launches ending in failure. The latest test, a successful launch carried out from the Vladimir Monomakh, occurred in early September. Until issues with the Bulava’s reliability are ironed out, Yuri Dolgoruky and her sisters in the Russian Navy will be without their primary armament.

Originally conceived in the early 1990s as replacements for the Akula and Oscar class submarines, Yasen nuclear attack submarines are finally entering regular production. Two subs have been completed, Severodvinsk and Kazan, with additional units planned.

The Yasen class is one of the most advanced submarines in the world. The class reportedly has a crew of only ninety, implying a high level of automation. A 200MW nuclear reactor is thought to power the submarine to a maximum speed of 35 to 40 knots, with a “quiet operating speed” of 20 knots. A Irtysh-Amfora spherical bow sonar array provides both active and passive detection. The submarine is also equipped with a towed linear passive array.

The Yasen class has eight vertical launch tubes, four 650mm torpedo tubes and four standard-diameter 533mm torpedo tubes. Besides standard guided torpedoes, Yasen will almost certainly be armed with the Shkval supercavitating torpedo, capable of traveling at 200 knots to ranges from 7 to 13 kilometers.

Like the USS Virginia class submarines, Yasen has vertical launch tubes capable of carrying cruise missiles. The tubes are likely loaded with SS-N-26 or SS-N-21 Sampson missiles. The SS-N-26 Oniks is a ramjet-powered, sea-skimming, anti-ship missile with a range of 120 kilometers and a 200 kilogram warhead. The Sampson is a land-attack cruise missile similar to the American Tomahawk with a range of 2,500 kilometers.

At least five Yasen class submarines will be built. Typically the first ships in any Russian ship class serve with the Northern Fleet, with ships only sent to the distant Pacific Fleet after design kinks are ironed out. However, if this report on Severodvinsk’s sea trials is any indication, the Pacific Fleet isn’t going to see Yasen subs anytime soon.

The Soviet Union built three Kirov-class nuclear powered battlecruisers in the 1980s. The largest surface combatants built in decades, the Kirov battlecruisers displaced 24,000 tons fully loaded. Of the three ships, Kirov has been scrapped, Pyotr Velikiy is in service and a third, Admiral Nakhimov, is expected to be receive upgrades and return to service.

The Kirov class uses for its Primary armament twenty P-700 Granit anti-ship missiles. Known as the SS-N-19 “Shipwreck” in the West, was designed to attack very large ships. It was designed so that if just one missile managed to evade the layered defenses of a carrier battle group, it would still do significant damage. Each missile is ten meters long, the size of a small aircraft. Speed is estimated at Mach 2.5, and range at 500 kilometers. The P-700 can carry either a 750 kilogram conventional warhead or a 500 kiloton nuclear warhead.

In the course of their mission, sailing at high speed, battlecruisers would likely outstrip their escorts. Anticipating this, the Soviet Union gave the battlecruisers strong anti-air defenses. Pyotr Velikiy carries forty-eight S-300F and forty-two S-300FM Fort-FM surface-to-air missiles, the seagoing equivalent of the S-300 “Grumble”. RIA-Novosti reports it is the only ship in the navy capable of engaging ballistic missiles. For closer-range defense, the ship also has 128 SA-N-9 “Gauntlet” surface-to-air missiles (the naval version of the SA-15 “Tor”) and five Kashtan close-in-weapons systems.

The large size of these battlecruisers meant they could sport more crew amenities than the average Soviet ship. Compared to the otherwise Spartan accommodations of the Soviet Navy, the ships were built with saunas (complete with six meter pool), a saloon and a billiards room.

The Admiral Flota Sovetskogo Soyuza Kuznetsov is Russia’s only aircraft carrier. Soviet ship designers began work on the design in 1974, and the ship itself was launched in 1985 at the Nikolayev Shipyards in modern-day Ukraine. After the breakup of the Soviet Union the carrier was posted to the Russian Navy’s Northern Fleet.

Kuznetsov displaces 55,000 tons fully loaded, about half as much as American Nimitz-class carriers. It features three 15-degree ski ramps to assist aircraft takeoff, and has four arrestor wires for landing. Two large elevators can move aircraft back and forth between the hangar and the flight deck.

The carrier itself has a substantial armament: twelve P-700 anti-ship missiles sit in silos in the bow of the ship, between aircraft takeoff positions. Although this gives the Kuznetsov a considerable anti-ship capability on its own, it seriously limits hangar space for aircraft. Twenty-four SA-N-9 air defense missiles an outer layer air defense, backed up by eight Kashtan close-in-weapons systems and six AK-630 Gatling guns. Two RPK-5 Liven anti-submarine rocket launchers provide a last-ditch submarine defense.

Kuznetsov has had serious problems with its propulsion system. A thorough upgrade, including installing a new power plant and removing the P-700 missiles to enlarge the hangar, has been promised but remains to be funded. Without an upgrade the carrier may very well be retired in the 2020s.

The issue is reliability. Many of Russia’s older ships are seriously out of date, powered by thirty-year old propulsion systems that are unreliable. Sending a powerful ship such as the Admiral Kuznetsov, Admiral Vinogradov or the Pyotr Velikiy abroad on a show the flag mission would be counterproductive if the ship broke down and had to be rescued.

Russia’s tugboat crews serve in the background and don’t enjoy the privileges of sailing abroad. In 2010, the Russian Pacific Fleet sent its flagship Varyag to visit San Francisco. The large, imposing cruiser docked and its sailors scrambled ashore to buy cell phones and designer clothes. The crew of the salvage tug Fotiy Krylov were not as lucky: although the (comparatively) little ship accompanied Varyag all the way from Vladivostok, the tug remained outside the Golden Gate and never docked in the city.