Russia's 5 Next Big Moves in Syria 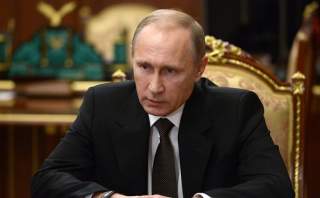 Russia formally intervened in the Syrian Civil War a little more than a month ago. Since then, the Russians have established a reputation for high sortie rates and inaccurate bombing, and a penchant for attacking anyone but the Islamic State. Russian and Syrian forces have made some progress in coordinated offensives against rebel positions, but the going remains slow.

It’s difficult to avoid the feeling that Russia and the Assad regime are simply treading water, trying to maintain what they hold instead of making serious inroads against either ISIS or the “moderate” Syrian rebel factions. Russia’s major losses thus far include a civilian jetliner, destroyed by an ISIS bomb, and a Su-24 Fencer, shot down by Turkish F-16s. Syrian government forces have lost numerous ground combat vehicles in attacks against well-armed, prepared rebel factions.

Now it looks as if Russia wants to step up its intervention. What do the Russians need to do in order to turn things around and win this war? Here are five capabilities that Russia needs to commit to the fight in order to save the Assad regime:

While the shootdown of the Su-24 Fencer near Turkish territory demonstrated the vulnerability of the unescorted attack aircraft to modern jet fighters, the Russians still need to help the Syrian Arab Army (SAA) and associated militias make progress on the ground. The best way to do that is to use a tough, heavy attack plane like the Su-25 Frogfoot, which can have an immediate impact on the battlefield. Known as the Soviet equivalent of the A-10, the slow-moving Frogfoot can deliver a tremendous amount of ordnance while taking a beating from small arms.

With some indication that Russia is about to massively step up its air campaign in Syria, we can be sure that additional attack aircraft, like the Frogfoot, will soon appear in the skies over rebel held territory. These aircraft will have a big impact on the success of SAA ground offensives.

Earlier this week, Russia announced the successful deployment of an S-400 surface-to-air missile system in Syria. Other articles have focused on the technical capabilities of this system, but in political terms the S-400 offers the Assad regime insurance against either a Western no-fly zone or an anti-Assad air campaign. This means, in effect, that ISIS and other Syrian rebels will need to defeat Assad (and Russia) on their own, without the direct kinetic support of any of their allies.

Western air forces can probably defeat the S-400 and associated air defense systems, although they might incur losses along the way. However, direct attacks against the Russian air defense network would portend a much higher level of escalation than anyone has expressed an interest in. The S-400 gives Russia a practical veto over any Western action against Assad.

The most important weapon that Russia can use to save the Assad regime is its diplomatic corps. Although Russian soft power has deteriorated over the past several years, it still has the power and influence to make side deals with relevant stakeholders in the Syrian conflict. This includes Syria’s regional neighbors, EU members less than enthusiastic about contributing to the fight and powerful countries further afield that might nevertheless make an impact on the conflict. All of this can help shift the terms of debate in the conflict in the direction of the Assad regime’s survival.

Among Russia’s most precious diplomatic assets is its veto on the United Nations Security Council. Russia can use this veto as a shield, preventing any serious UNSC action on the conflict and avoiding a replay of the NATO intervention in Libya.

Russia does not now, and has never had the kinds of ISR assets that the United States takes for granted. Nonetheless, it can substantially improve the capabilities of the SAA in this regard. Russian ISR can help accurately map the capabilities of the various rebel factions and analyze their reactions to SAA offensives. This can help the Russians and the SAA develop an effective strategy for defeating the rebels.

Russian assets in this regard include not only recon aircraft and drones, but also electronic warfare units that can analyze rebel communications. Putting this information together in a digestible form for Russian and Syrian deployed forces is well within the capabilities of Russian intelligence.

The Syrian Arab Army and its associated militias need to take territory from the rebel groups that currently occupy much of the country. Unfortunately, the SAA has traditionally fallen short in mobile, offensive operations (it has done much better in static defensive ops and in artillery duels). The Russians need to provide a leadership core that can help win the war on the ground.

Unless Russia decides to deploy a much more substantial ground force to Syria (a tricky prospect given limited Russian resources and long-range logistics), the primary role played by Russian troops will primarily be leadership, coordination and support. Russian special forces need to take their cues from the experience of Western SOF in Afghanistan, Libya and elsewhere. At the same time, they must take care to avoid casualties, which would play poorly at home and prove embarrassing on the international stage.

Russia has a lot of war left to fight in Syria. The first weeks of U.S. intervention in Afghanistan, and of NATO intervention in Libya, showed few obvious fruits of progress. In both cases air attacks had weakened and fragmented the resistance, however, eventually allowing major ground offensives to roll up the country. Two or three months from now, the international community could be celebrating the successful efforts of the Russian military to defeat ISIS, and the Assad regime could be cheering the destruction of rebel factions in the west of the country.

Don’t bet on it, though.