Is Russia's Alliance with Greece a Threat to NATO? 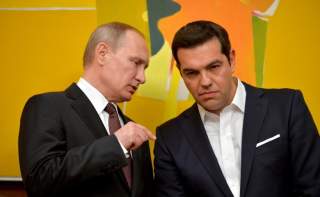 Against the backdrop of ongoing economic crisis and tensions over the troika-backed austerity program, the Greek government of Alexis Tsipras has formed remarkably close ties with the Kremlin. As an active member of NATO, the Greek embrace of Russia has been seen by many as a shot across the bow of Athens’s creditors and a reminder of the leverage cash-strapped Greece can still bring to bear in negotiating debt payments. For the Russians, Greece is one of several EU members (alongside Hungary, Cyprus and the Czech Republic) it can potentially win over to undermine the sanctions regime the Union imposed after Moscow’s illegal annexation of Crimea and intervention in eastern Ukraine. Given Greece’s geostrategic value and the role it could play in enforcing sanctions on Russia, the EU and NATO should make it a priority to curb Russian influence in a land touted as “the birthplace of democracy.”

Part of the concern over amicable Greco-Russian relations lies in the strong ties between their leaders, ever since Syriza rose to power. Greek officials have been effusive in their embrace of Vladimir Putin, striking a decidedly different tone from the rest of Europe. The two countries have deep historic and Orthodox religious ties, while relationships between members of Syriza party and political and business elites in Russia are worryingly close. Indeed, the first foreign official that Tsipras invited to the prime minister’s mansion was Russian ambassador Andrey Maslov.

Just this past May, Vladimir Putin traveled to Greece hoping to secure agreements on trade, investment, energy and transportation. Putin was joined by foreign minister Sergey Lavrov and a number of high-flying oil and gas executives, indicating the importance of the visit. Russia has expressed interest in purchasing Greek railway company Trainose, as well as Greece’s second-largest port in Thessaloniki. The close Greco-Russian ties also extend to defense cooperation and weapons projects. Indeed, Greece is negotiating with Moscow for the purchase and maintenance of the Russian-made S-300 air defense systems, which it has possessed since the late 1990s.

The cooperation between the two countries raises concerns about Europe’s ability to maintain sanctions on Russia. Worries over the relationship between Tsipras, his ministers and Moscow were raised as soon the party took power last year. The day after his election, Tsipras objected to calls for further sanctions against Russia and voiced his solidarity with Moscow and the Russian people. Tsipras and his ministers have both echoed Russian arguments of “neo-Nazi” elements active in Ukraine. Defense Minister Panos Kammenos, who has previously praised Russia’s Ukrainian intervention and referred to the government in Kiev as “fascist,” went so far as to suggest Kalashnikov rifles could be produced on Greek soil and sold to other NATO members, while Foreign Minister Nikos Kotzias has close ties to members of Putin’s inner circle. Ultimately, Tsipras’s government begrudgingly agreed to the sanctions.

That hard-won compliance may not last for long. As Russia strategically strengthens ties with Greece and other disgruntled EU members, it seeks to divide the bloc and encourage member states to ultimately dilute or stop sanctions, which will require a unanimous vote to extend. With the sanctions up for renewal every six months, there are ample opportunities for frustrated EU states like Greece use their veto power to block them. Even with the sanctions in place, Greece is looking for loopholes to export agricultural products to Russia. Gazprom and Russia’s development bank, for their part, have continued to pursue pipeline agreements with Greece since last year. Given the perceived importance of sanctions in deterring Russia from further military incursions, these are worrying developments for European unity on security policy.

A major factor driving Russian interest in Greece is the country’s strategic position in the eastern Mediterranean. The stakes of that location were put under a harsh spotlight as Syrian and Afghan refugees arrived en masse on centrally located Greek islands and the mainland. The islands are also critical for both European and NATO defense operations in the Mediterranean and the Middle East, notably the base in Souda Bay on the island of Crete. The base has played a major role in the wars in Iraq and Afghanistan, as well as other multinational operations. Athens’s ongoing economic restructuring has put many of these essential infrastructural assets in limbo, including airports and the Skaramangas shipyard—home to the country’s submarines. A further point of concern is that the shipyard is teetering on the edge, as the government plans to nationalize it and kick out its current owner.

The Greek drift into Russia’s arms raises the specter of Athens serving as a dark horse within NATO or, worse, outright withdraw altogether from the Atlantic Treaty. While that outcome seems extreme at first glance, Syriza’s original forty-point program called for Greece’s exit from NATO, and since at least one Syriza parliamentarian has talked about it. With the Russians flexing their military muscle in Syria and taking an increasingly active approach to the Black Sea and the Mediterranean, close ties with Greece would help Moscow’s power projection and undermine the unity of the NATO bloc at a critical juncture.

To counter Russia’s damaging influence over Athens, NATO and the EU need to repair ties with Greece, provide it with favorable terms on debt payments and austerity, and remind it of the benefits of NATO membership. Given its geostrategic importance and the need for it to comply with EU sanctions against Russia, Greek hostility toward Brussels could undermine the bloc’s solidarity and impair efforts to contain Russian aggression. As the EU continues to struggle with a refugee crisis, the conflict in Ukraine, economic turmoil and the rise of the anti-Europe right, a pro-Russian bastion in Greece is the last thing it needs.

Henry Stanek is an independent EU affairs consultant based in Paris.