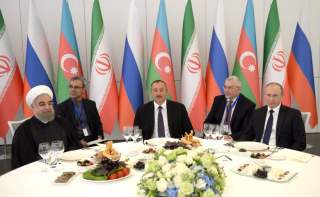 It has been a busy week for Russia's president Vladimir Putin—and the course of events in the Black Sea basin over the past several days suggest that the things that are happening are no coincidence.

On Monday, in Baku, Putin met with Iranian president Hassan Rouhani and Azeri president Ilham Aliyev for a Russia-Iran-Azerbaijan trilateral meeting. The three leaders inked documents to move ahead with new infrastructure projects designed to make the so-called north-south corridor that will link Europe and South Asia via Russia, Azerbaijan and Iran much more of a reality. Iran, having already experienced the troubles caused by international sanctions and Russia, currently dealing with Western sanctions, is anxious to develop and sustain a major keystone of the international economic system that will not be subject to U.S. or European pressure, while, for Azerbaijan, having two major trading lines—the north-south and one batch of the east-west running New Silk Road (and the southern energy corridor to Europe)—intersect in Baku heightens Azerbaijan's geoeconomic importance. Beyond these matters, however, the three presidents also found common ground in another matter: internal political security. All three believe that the United States is quite interested in fomenting "color revolutions" against the current rulers in the Kremlin, the Saadabad Palace, and the presidential building on Baku's Istiglaliyyat Street. Despite their political and policy differences—the three countries do not always see eye to eye on every issue (including on how the maritime zones of the Caspian Sea ought to be divided up among the littoral states), they have agreed on the principle that maintaining the status quo in one country benefits the surrounding states—and that they ought to cooperate to prevent any sort of revolutionary changes from occurring.

Rouhani reportedly asked Putin to carry this last message onward to his second meeting of the week, on the next day in St. Petersburg, where President Recep Tayyip Erdogan arrived to mend fences with Russia. The Turkish president appears to still be rattled by the coup attempt against his last month, and he and his advisors seem inclined to believe that, even if the United States did not directly inspire the coup, Washington would have been happy to live with the results.

More pragmatically, Erdogan has begun to reassess his Syria policy. Unlike American policymakers, who sometimes doggedly insist on doing the same thing (hoping that endurance or more resources thrown at the problem will bring about a different result), Erdogan can see the negative ramifications of continuing to confront Russia over Syria. Not only is Syrian leader Bashar al-Assad much less likely to fall now that it appeared last summer, the heightening of tensions with the Russians (alongside the American need to find reliable allies capable of taking the fight to the Islamic State) has made the emergence of a Syrian Kurdistan much more of a reality than at this point in 2015. In Ankara's eyes, it would be preferable for "Assad to go" but not at the expense of seeing yet another autonomous Kurdish entity emerge on Turkey's border.

Erdogan's relationship with Europe has also worsened. Last year, he was the indispensable figure in managing the migration crisis. Now, that basis for the Turkey-EU relationship is weakening. Of much more lasting significance would be Turkey's emergence as the critical transit state for Europe's energy supply. The trans-Anatolian line bringing energy from Azerbaijan is the first piece, but if Turkey can also secure the Turkish Stream from Russia and become the onshore terminus for Israel's offshore Leviathan fields, Ankara becomes Europe's energy hub.

So Erdogan, like the Emperor Henry at Canossa, made his pilgrimage to the former imperial capital of Russia to present his apologies in person to Putin for the shoot-down last year of the Russian jet operating in Syria, and presented proposals for joint action on Syria and for restarting the Turkish Stream line. With the latter, Erdogan clearly understood that by putting Turkish Stream back on the agenda, he has renewed an option that would allow Moscow to reach its declared 2019 goal of eliminating all transit of Russian energy to Europe across the territory of Ukraine.

The day after, in Moscow, Putin received Armenian president Serzh Sargsyan. The Armenian leader, who has also faced internal unrest, got the same guarantees—that Moscow desires retention of the status quo. But Putin also made it clear that it will be the Kremlin who henceforth will call the shots in managing the frozen Nagorno-Karabakh conflict between Azerbaijan and Armenia—and that Armenia, in return for continued Russian protection and economic largesse, will need to accept Russian direction, not in solving the conflict too quickly, but in making enough compromises to allow Aliyev to claim he is making progress in regaining control over the lost territories.

Then, at the joint press conference in the Kremlin, Putin turned to the situation in Ukraine.

There has been an uptick in clashes, followed by the deployment of additional Russian forces along Crimea's administrative boundaries with the rest of Ukraine, raising concerns that a return to full-scale military hostilities is imminent. Then the Russians announced the discovery of a supposed plot by the Ukrainian special services to foment terrorist activities in Russian-controlled areas.

Putin made two critical points. One, he declared the Normandy format—the group of Russia, Ukraine, France and Germany set up to find a workable solution to the crisis—to be all but dead, because of Ukraine's unwillingness to move on the question of devolving authority to the regions. The second was to characterize the Ukrainian government as the irresponsible player who was uninterested in finding a settlement.

From the Russian perspective, the continued demand of the Europeans that the lifting of sanctions on Russia is directly connected to the implementation of the Minsk accords is a way to keep those sanctions on Russia in perpetuity, since the Minsk arrangements are effectively a dead letter. The only way forward for Russia is to have blame for the lack of a settlement shift broadly to the Ukrainian side. Thus, if Ukraine, in 2016, like Georgia in 2008, can be baited into making a precipitous move, perhaps the situation can change. Consider that in the aftermath of the Georgia war, Russia was able to escape from any long-term sanctions while getting the rest of the world to effectively turn a blind eye to the detaching of South Ossetia and Abkhazia from Georgian control.

And if Putin now has the Turkish Stream option back in play, and an eventual new trade route via Iran to the Persian Gulf in development, he has alternatives in play (along with Russia's bid to have a second Nordstream line built across the Baltic to directly link Germany and Russia.)

Russia is making its bid to be the arbiter of the Black Sea basin. Putin's schedule of meetings this week sheds some light on Russia's priorities in the coming months.