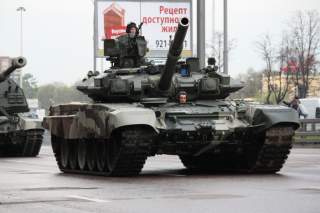 Professional soldiers, equipped with the latest weaponry and body armor, quickly and efficiently seized Crimea. A rebellion, with “indigenous” rebels suddenly equipped with heavy weaponry and sufficient coordination, quickly metastasized into a full blown insurgency. New, modern and impressive equipment paraded before Moscow and the world in the largest Victory Day Parade since the fall of the Soviet Union.

The recent activities and public displays of modern equipment leave the impression that Russia has begun fielding a first rate military again, commensurate with its aspirations of being a global power. The role and visibility of the “little green men” in recent months leave an impression of a well-trained and coordinated Russian military, increasingly equipped with state of the art equipment. The takeover of the Crimea peninsula was supremely impressive. It was well executed with professional units. The Airborne (VDV), Naval Infantry and Spetsnaz that were responsible for seizing the initial key points around Crimea were impressive not only for their coordination but their professionalism in the face of journalistic interest. The seizure of Crime was shocking both for the audaciousness of the Kremlin, but also in terms of military capability. Few realized that Russia had the capability to conduct an operation like Crimea. And with increasing concern over the potential return of fighting in Eastern Ukraine, the fears over a resurgent Russian military continue to menace.

Beyond the public displays lays a more complicated view with more nuanced realities. While Russia has produced new technological toys (such as the Armata series tanks and armored vehicles), Moscow’s ability to pay and sustain modernization efforts leaves lingering doubts about a resurgent Russian military. Despite the almost ebullient hysteria surrounding Russia’s new equipment and capabilities, its military is still hampered by structural, economic and strategic constraints that not only limit its evolution and growth, but also threaten its current progress.

The “New Look” modernization effort Russia began in 2008 has created two militaries; an elite (or more professional) force capable of conducting rapid, complex operations with generally modern equipment; and the rest of the military, which still relies upon conscription, mass mobilization and mixed levels of modern equipment.

Even among the “little green men,” the outlook is far more mixed than the Crimea annexation would suggest. Most spetsnaz are actually conscripts on one year terms, although they do get the pick of the conscription call up. As Mark Galeotti notes, “the bulk of spetsnazovets may arguably best be compared with the French Foreign Legion, the British 16th Air Assault Brigade or the U.S. 75th Ranger Regiment, in that they are elite, mobile light infantry able to function in a range of operations and climates, and optimized for interventions, but not a 'Tier One' special operations force.” Moscow does retain around 500 tier one troops (equitable to Delta or Seal Team Six) in a separate force, which were utilized in seizing the Crimean parliament.

And while the more elite units of the military are starting to embrace small unit independence and rapid deployment, the conventional Russian military continues to be influenced by the old Soviet structure of numerous under-manned units, pre-positioned with equipment to be brought up to full staffing levels during times of conflict. The drawbacks of this design were laid bare during the 2008 war with Georgia, where airborne units (VDV) were able to deploy faster from interior Russia than those units stationed in the Caucasus. The 2008 modernization effort sought to replace this unwieldy division structure with smaller, more agile and autonomous Brigades. Although, the efforts to reduce the reliance upon mass mobilization and undermanned units continue, this trend has been somewhat reversed as some divisions have been brought back.

Despite plans for fully staffed units, the troops injected into Ukraine have been pulled from fully (or partially) staffed subunits all across Russia and thrown together to fulfill requirements. Reports of casualties of “Russian volunteers” are indicative of troops from various regions and units being put together for mission specific operations (although most have come from the elite Paratrooper and Spetsnaz).  Even with the efforts to eliminate the mass mobilization structure of the Army, most units remain woefully undermanned.

The vacillation between unit structures is in part confounded by the same strategic issues that have always plagued Russia. It has too few men to guard its borders and the diverse threats the country faces. Russia today must have a technologically advanced military to guard against NATO, a counter-insurgency force for rapid deployment in the Caucasus and Central Asia, forces for the increasingly competitive Arctic, and a large conventional force able to guard against threats in the Far East. Russia is still debating how to balance between guarding against all threats and fielding more efficient unit structures.

Complementing plans to increase units to permanent readiness status have been efforts to increase the level of professional troops, kontrakniki. These efforts have fallen considerably short (the retention rate for kontrakniki remains unacceptably low, and recruitment targets are struggling to keep up with the attrition rate). Slightly increased housing, pay and status have remained unconvincing to most of Russian society. Efforts to recruit kontrakniki were also designed to create an NCO corps that the Russian military never had (not to mention never having a professional recruiting corps that has also limited the recruitment of professional soldiers). NCO roles in western armies are filled in the Russian military by lower level officers, contributing to a bloated officer corps. While many nations do not retain a professional NCO corps (China), experienced NCOs are crucial not only to manage the increasingly technical components of warfare (especially with the emphasis on increasing the military’s network-centric and C4ISR capabilities), but also to ensure the proper training and readiness of the units. As much as Russia has announced and displayed its modern army, it is still reliant upon the conscription of its youth to project its great power status.

In terms of new equipment, it is easy to look at specifications and be impressed by details. However, this ignores considerations of how these systems will actually operate. The new toys Russia displayed during May 9th parade—such as the Armata T-14 tank, Kurganets 25, T-15 IFV and Boomerang—are extremely impressive in isolation, and do represent a dramatic revolution in Russian armament design (although it remains to be seen if they can produce high quality optics domestically. Russia currently imports its optics from Thales for its T-90 tanks).

And while their actual utilization will represent large increases in capability for the Russian military, their utility is constrained by their ability to arrive on the battlefield. Russian strategic transport capabilities remain woefully lacking and still rely upon rail transportation, with little improvement of air and sea transport, limiting the Russian military’s capacity to rapidly reorient its forces. The Kurganets 25 IFV, for example, is ten tons heavier than previous BMP units, making it far more difficult to rapidly transport to conflict zones. The Soviet military compensated for its inadequate transportation infrastructure by pre-positioning large equipment depots to supply conscripts once they arrive. This strategy is inadequate in a threat environment relying upon the rapid movement of troops (and equipment) to emerging crisis. While the Airborne (VDV), Naval Infantry and Spetsnaz units retain sufficient logistical support to conduct operations like Crimea, the same cannot be said for the regular troops necessary to support those rapid deployments.

Despite the issues over strategic design, manning and transportation, economic considerations may well determine the extent of Russia’s grand military designs. As Dmitry Gorenburg notes, with the economy suffering from sanctions, investment flight and low oil prices, “the money allocated may not be sufficient to build what they want to build.” The situation is succinctly summed up by one of Russia’s most famous economists (now in self-imposed exile in Paris) Sergei Guriev, “In any case, Kudrin's economic and financial logic is even more valid today than it was at his dismissal from office. If Russia could not afford a 4 percent-of-GDP defense budget in good times, it cannot possibly manage such a high rate of military spending now, when it confronts rock-bottom oil prices, Western sanctions and economic recession.”

Russia has dramatically improved its military capabilities, professionalism and training since the beginning of its 2008 modernization. Despite the technical improvements and selective increase in operational capability, the Russian military remains a shadow of its perceived capability. For nations around its periphery Russia remains a prominent and capable threat. Beyond its periphery, Russia is far weaker than would be perceived. Its displays of strength hide a much more complicated operational capability, and why its nuclear arsenal—and incendiary statements pointing to it—remain integral to Russia’s security posture. The actual ability to deploy the cool new toys dictates just how threatening they really are.