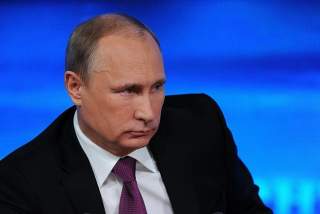 President Vladimir Putin promises the Russian economy will recover from the losses inflicted by sanctions and falling oil prices within two years. Russian energy executives expect that the current slump will correct itself by mid-2015, as demand picks up and the existing glut of supplies disappears. Yet, what happens if these expectations do not come to pass?

Presumably, tackling such unpleasant questions and preparing contingency plans is one of the main tasks for the ministries and agencies of the Russian government with oversight for the economy who have been asked to forego the traditional New Year's vacation to concentrate on economic policy.

If significantly lower global energy prices represent a “new normal” that is likely to persist for years to come, however, what then?

Some Western analysts argue that not only Vladimir Putin’s personal political popularity, but the entire economic and political order that has been constructed in post-Soviet Russia could come crashing down—and that with only a minimal exertion of some additional economic pressure, the West could either force the Russian government to considerably modify foreign and domestic policies that have not been welcomed in either Washington or Brussels (from disgorging Crimea and accepting Ukraine’s full entrance into the Euro-Atlantic bloc to recasting domestic political institutions along Western liberal lines) or bring it down altogether. Others, however, warn that the Russian populace will accept Putin’s call to shoulder the burden of greater economic austerity in order to defend Russia’s independence and sovereignty, pointing to the historic patterns of tremendous popular resilience in the face of unbelievable hardship.

Putin, however, shows no particular inclination to throw in the towel and alter course, especially because there is no guarantee that significant Russian concessions would in fact bring any real economic relief from the West. Having sensed the Kremlin’s weakness, influential political actors in Western capitals will most likely argue against extending any sort of lifeline to the Putin administration, even if it accedes to most Western demands. At the same time, patriotic invocations of the heroic struggle during the Great Patriotic War aside, Putin is well aware that an appeal to nationalism can only go so far in addressing the economic crisis. Foregoing Danish butter is one thing; but a significant erosion in living standards and in the social safety net poses a serious threat to the legitimacy of the regime. One only has to chart the precipitous decline in the past year in the standing of the Venezuelan government headed by Hugo Chavez’s handpicked successor Nicolas Maduro, especially among the population of stalwart supporters of the late Commandante, to see disturbing parallels for what might happen in Russia in the years to come.

The immediate task, therefore, is to attempt to wall off a whole raft of goods and services from being impacted by the ruble’s slide and a decline in energy revenues. A major test in 2015 will be whether alternate suppliers for food, consumer goods and technology products traditionally imported from Europe—whether from a stimulation of domestic producers or from Russia’s BRICS partners and other non-Western states—can sufficiently shield Russian consumers from the twin shocks of a devalued currency and lessened income.

Beyond that, it is clear that there will need to be a significant renegotiation of the current political “bargains” among the elite. For many years, the famed “gray cardinal” of the Kremlin, Vladislav Surkov, had noted that the peculiar position of the Russian business elite as defined by the practice of “offshorization” (holding their domestic business holdings via non-Russian-based corporate entities) was not sustainable. Offshorization was a hedging strategy—allowing Russian business figures to act as domestic players, yet keep their fortunes beyond the Kremlin’s reach, in return for political loyalty and responding to Putin’s requests for support of his initiatives. But under new conditions, where the Russian government needs more revenues and requires greater certainty of business loyalty, the old bargain no longer suffices. What we may begin to see in 2015 is a new split in the Russian business community. Those whose business interests and core assets are not based in Russia may decide to sell out or abandon their Russian companies. Those whose bread is in fact buttered in Russia, on the other hand, will have to comply, to some extent, with Kremlin dictates for “de-offshorization” and accept new rules of the game.

At the same time, those in charge of state companies and the bureaucracy as a whole will also face new pressures. In good economic times, the proverbial “license to steal” could barely be tolerated as it was, acting as a major drag on economic growth and contributing to Russia’s lackluster economic performance, even in the two years before the sanctions and energy-price collapses hit. (One might note that this is a major problem that the new government in Ukraine must also tackle if it is to avoid looming economic collapse.) Now, under pressures of budget austerity, the diversion of state outlays for private gain is no longer a laughing matter. Major state projects—especially the defense buildup—cannot be sustained at the same pre-crisis levels of expenditures. Either the corruption surcharge that helped to inflate expenses must be reduced—or Putin must accept less output. Furthermore, given that Russian businesses will be asked to make new sacrifices as part of the de-offshorization effort—especially putting more of their treasure at risk—the traditional rapaciousness of the Russian bureaucracy must be tamed—or growth and tax revenues will be adversely affected. In particular, this could negatively impact the effort to cultivate new domestic producers to replace now-expensive imports—but if corruption chokes off the small- and medium-enterprise sectors of the economy, the collapse of energy prices has meant that the traditional solution of the wealthy energy producer—to simply buy from abroad—is not an option.

What this all translates into is that all sectors of Russian society—from oligarch to pensioner—must accept a lower standing of living for the foreseeable future. It will also be a test as to whether Putin’s appeal to patriotism moves beyond the symbolic towards business figures and bureaucrats actually making changes in their modi operandi. Putin’s continued hold on power has rested, to some extent, on the appeal that Russians today are doing much better than they were in 1998, even if not as well as 2008. The most critical question for Russia’s future, however, will be whether or not enough Russians believe that they could be doing even better in a Russia without Putin. How that question is answered—both by political and business elites and ordinary Russians—may well prove to be the deciding factor.