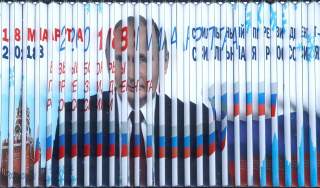 Another round of Putin’s reelection (as Russians have come to call presidential elections) is scheduled for March 18, 2018. While little may be surprising about who will actually win, the Kremlin is trying its very best to inject some interest and entertainment value into the election.

Russia’s authorities have learned from the experience of the 2011–12 election, when public dissatisfaction with lack of change led to a series of countrywide mass rallies. For a start, the authorities have introduced some liberalization to Russia’s formal electoral rules. Among other things, they permitted an increase in the official number of candidates. Legislative amendments allowed more parties to form; in the 2017 parliamentary election, fourteen parties were formally allowed to compete, as opposed to only seven parties in the prior election in 2011. Since parties can nominate their own presidential candidates, the 2018 presidential field is also expected to widen in comparison with the previous presidential election, in which only five candidates were officially registered to participate.

In addition to increasing the number of smaller-scale candidates, the Kremlin has also enforced some variation among the candidates of the traditional “system” parties. Historically, Russian politics under Putin has been characterized by a remarkable stability of parties and faces. The same four parties, headed by the same leaders—United Russia, the Communist Party (CPRF), Just Russia and the Liberal-Democratic Party of Russia (which is actually national populist)—have contested all of the last three elections. Hence Russia’s elections have often felt like a visit to old relatives, with familiar faces and encounters.

One such familiar face in the Communist Party is Gennady Zyuganov, who has chaired the Communist Party for twenty-three consecutive years and taken part in every Russian presidential election since 1996 (except for 2004). It thus came as a something of a surprise when a newcomer—Pavel Grudinin—announced he would run for president on the Communist ticket. Grudinin, who is a successful strawberry-selling businessman with alleged links to the local Moscow government and is not a Communist Party member, owns a company named Lenin Sovkhoz and bears a physical resemblance to Joseph Stalin. Grudinin previously served in the Moscow regional parliament as a candidate from the United Russia party (formally the Communists’ competitor), and served as a surrogate for presidential candidate Vladimir Putin. Later, he developed ties to the political Left. Kremlin-linked observers hint that Grudinin’s candidacy was pushed by the Kremlin despite the Communists’ initial resistance. Grudinin’s candidacy is a continuation of the Kremlin’s effort to add variety to the pool of traditional presidential candidates.

The Kremlin has also worked on the right side of the political spectrum. Several minor political parties have historically claimed to represent the liberal Right in Russia, including the social-democratic Yabloko and pro-business Right Cause (Pravoe Delo). These parties play by the Kremlin’s rules and have repeatedly failed to make it to the Russian Parliament. Yet this year, a new figure has emerged. Ksenia Sobchak, a celebrity, TV anchor and daughter of a popular Russian politician of the 1990 (who was Putin’s own political mentor), has been called “Russia’s Paris Hilton.” In 2011 Sobchak temporarily flirted with the opposition protests. In October 2017, she suddenly announced her decision to run for the presidency as a candidate “against all,” vowing to stir a discussion about what is wrong with Russia. Sobchak’s decision to run is allegedly inspired by the Kremlin, and came after a personal meeting with Vladimir Putin. Her candidacy may be primarily designed to attract followers of Aleksei Navalny—Russia’s opposition leader, who launched countrywide protests in Russia in 2017, but who is banned from running in the presidential election. If Sobchak is successful, she will split Navalny’s movement, while her own controversial background will stop her from attracting too many votes.

The Kremlin’s tactics seem designed to increase the variety of personalities allowed to run without threatening the outcome: Vladimir Putin winning with a persuasive majority of votes. This approach includes a sophisticated equilibrium between banning candidates who could seriously challenge Putin (like Navalny) and keeping turnout from falling too low. Ensuring a decent electoral turnout remains the Kremlin’s main concern. The interest in the upcoming election is currently at a record low in Russia, with only 58 percent of Russians saying they will participate. In recent years, presidential-election turnout in Russia has been declining overall. In the preceding 2012 presidential election, the turnout was also low, at 65.34 percent. And it was at a record low in the 2016 parliamentary election, when only 47.88 percent showed up at the polls.

Russians’ failure to show up at the election may cast doubts on Putin’s status as a non-alternative popular leader. In late 2016, presidential administration official Sergey Kirienko argued that the “main candidate” will need to receive 70 percent of votes under 70 percent turnout. To achieve that goal, the Kremlin has launched a series of tactics designed to increase the turnout in this upcoming election. The idea is to present the election as a kind of celebration to the Russian people. The Kremlin recommends that regions organize events during the election. One such project, “Photo at the election,” would encourage participants to take selfies at polling stations, post them on social networks and win prizes. Another project is to conduct polls of residents on issues of landscaping—where to put a garage or a park—on the day of the election.

In the meantime, Navalny’s campaign has asked his supporters to boycott the election, hoping that Russians’ failure to show up on March 18 will demonstrate Putin’s general unpopularity and lack of legitimacy. He and his followers plan to organize a series of countrywide protests against the election, the earliest of which is scheduled for Sunday, January 28. Whether the boycott will be successful is highly debated among the Russian opposition. Opponents point out that in other countries electoral boycotts have rarely been successful for the opposition, and lower turnout of opposition voters will actually increase the share of Putin’s votes. But the actions of the Russian nationalists--who are widely assumed to be acting as proxies for the authorities, who have been vandalizing Navalny’s electoral offices across the country and who are threatening to silence pro-boycott messages--suggest that Navalny does indeed have a point.

Whether the Kremlin’s efforts at increasing electoral turnout, or Navalny’s efforts at suppressing it, will eventually prove successful remains the only really intriguing thing about the upcoming March election.

Maria Snegovaya is a PhD candidate at Columbia University and a columnist for the Russian e-publication Colta.

Image: A multi-sided transformable board, which informs of the upcoming presidential election on March 18 and advertises the election campaign of Russian President Vladimir Putin, is on display in a street in Moscow, Russia January 15, 2018. REUTERS/Sergei Karpukhin​