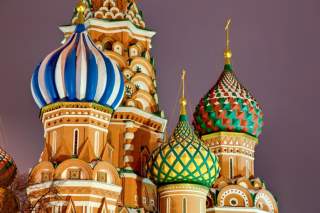 Is the Russian economy going to collapse? Do sanctions matter? These are the two questions most often asked today about the Russian economy said Sergey Aleksashenko, the former first deputy chairman of Russia's Central Bank and a former deputy finance minister. At the Center for the National Interest on Thursday, Aleksashenko explained what the fall in oil prices, the decline of the ruble, the rise in inflation and the impact of U.S. and Western sanctions have wrought in Russia.

A year ago, oil was trading at near $100 a barrel; today it is less than half that. The IMF’s most recent data project the Russian economy will contract by 3.4 percent this year (it was growing by the same amount as recently as 2012). Russia is in recession, its longest since 1997. But collapse is not in the cards, said Aleksashenko, who has also served as the chairman and CEO of Merrill Lynch Russia. His lapidary verdict: the Russian economy is “more stable than many believe.”

But Aleksashenko in no way tried to sugarcoat developments in Russia. Quite the contrary. He explained that his overall forecast for the Russian economy is “rather gloomy.” Sanctions have hurt Russia’s economy, but their impact has shifted in the last year. Financial sanctions were responsible for about 50 percent of the impact of the downturn in December 2014, when the ruble’s value fell by a third in a matter of weeks, Aleksashenko said. Another 30 percent of the downturn was due to the dip in oil prices and the remainder due to central bank mismanagement. Now, however, a level of stability has returned and the impact of sanctions has been reduced. The price of oil has become more important, he said, and is now responsible for 45 percent of economic problems, with sanctions at 40 percent--and the remainder coming from mismanagement by the government.

While the impact of financial sanctions on the Russian economy will be smaller going forward, Aleksashenko said, its impact on the Russian government’s budget is becoming more apparent. Sanctions have closed the option of Russia funding its budget through borrowing, Aleksashenko said, nor is further privatization a likely option. The remaining option is to fund deficits by drawing from its reserves—yet even this option is limited by the expectation sanctions will be long lasting and reserves should therefore be sustained as long as possible. At the exact moment public spending should be increased to offset the slack in private consumption, Russian budgets are being cut, said Aleksashenko. Moreover, the cuts hit investment hardest (immediate social spending is favored), diminishing future growth prospects. Starting next year, Russian military spending may feel a squeeze as well, with cuts focused on the country’s navy, which is dependent upon western technology.

The decline in the ruble has been, according to some, a silver lining for the Russian economy as it has allowed exports to remain stronger than they otherwise would have been without devaluation. But according to Aleksashenko, the truth is more complicated. Russian businesses, especially exporters of oil and raw materials, are “price takers” not “price makers.” Exporters are prepared to sell at whatever the international market demands—and this physical demand is far more influential in the health of Russia’s export-driven part of the economy than quarterly fluctuations. Few exporting companies in Russia would be permanently hobbled by lower profits. Russian oil companies, he points out, can produce oil at prices of $30 a barrel. “It’s not an issue of profitability. It’s an issue of getting cash,” Aleksashenko said.

Moreover, the next largest component of exports after raw materials, arms sales, is politically driven rather than profit driven. On the prospects of a stronger Eurasian economic union, or even of introducing a common currency within that union, Aleksashenko was less than sanguine. The main obstacle, he says, is that interests are at odds. For smaller countries the impetus for further integration or for a common currency is primarily economic, fed a desire for access to Russian markets and Russian largess. For Russia, however, the main reason for such a union would be political, to keep a sphere of influence; any access to new markets would be marginal, not sufficient on its own to entice Russia toward further integration.

Over a year or two, a downturn can be weathered by moderately drawing from reserves. But if oil prices remain low over five or seven years, Aleksashenko notes, he expects the Russian government to borrow directly from the central bank to finance its budget. All indications of current head of the Russian central bank, Elvira Nabiullina, are that, while maintaining some constitutional autonomy, she is also “very keen to provide money to the government one way or another” to finance any future federal budgets, Aleksashenko said. And monetary finance, “definitely leads to inflation, sooner or later,” he added.

The structural problems in the Russian economy today cannot be solved by economic policy alone, Aleksashenko said. Higher or lower interest rates, larger or smaller deficits, more or less government involvement—each of these is eclipsed by what Aleksashenko calls the biggest problem in Russia’s economy at the moment: the lack of property rights protection, and the consequential decline of investment. This, he adds, is political policy: “It’s independent courts. It’s political competition. It’s the rule of law. It’s fighting corruption.”

What does this mean for President Putin? Social unrest is unlikely, said Aleksashenko. The deal between Putin and the majority of Russian society now is to prioritize the country’s status as a great power over an increase in living standards, Aleksashenko said. Sanctions are expected to remain in place for some time. Russians are “ready to adjust” to economic conditions, said Aleksashenko. According to him, Russia is an absolute monarchy with Putin as the sole decision-maker on political and economic matters. Yet there is no designated heir apparent. The real question, then, is how—whenever the day arrives—a transition will be managed from Putin to his successor.