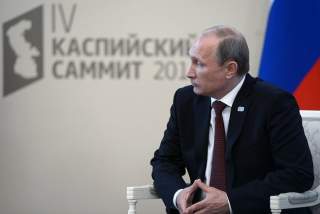 Those who may have hoped to hear a conciliatory message from President Putin at the Valdai Club meeting in Sochi last week were disappointed. The speech was almost immediately dubbed Munich II—both in Russia and in the West. Putin appeared a wartime president, defying the U.S.-dominated global system, and supremely self-confident. He did talk about the need to agree on common global rules of the game and the relevant mechanisms for enforcing them, but this part of his remarks sounded like Sunday preaching. Basically, he demanded that the United States learn the art of self-limitation, make room for others in this world and mind its own business.

Emotionally, the centerpiece of Putin’s intervention was the lack of respect in the West for Russia and its interests: a recurrent theme with him for the better half of the decade. Essentially, he told the international audience of scholars and journalists: when Russia called itself the Soviet Union, was arming itself to the teeth with nuclear weapons and had leaders like Nikita Khrushchev, who famously banged his shoe at the UN General Assembly and came close to banging the United States with nuclear-tipped missiles, Moscow was respected, and its interests taken into account—if anything, out of fear. Now that Russia has shed communism, gotten off the backs of a dozen satellites, allowed its own fourteen borderlands to form independent states; embraced capitalism and begun moving toward democracy, its interests are being wholly ignored.

This diagnosis is generally correct, but the analysis needs to go deeper. Putin, a self-avowed student of history and a champion of the Westphalian tradition in international relations, certainly understands that the balance of interests—a phrase he should not have borrowed from Mikhail Gorbachev—rests on the balance of power or equivalent. This, by the way, is well understood in Beijing, where I heard—also last week—that the talk of multipolarity is just talk, for the lack, now or in the foreseeable future, of multiple poles. In reality, the world was moving toward new bipolarity, this time between the United States and China, with all other countries aligning themselves with either of the two poles. Thus, Europe and Japan would side with the United States; and Russia would go to China.

The way the Chinese see it, Russia is not an all-round “major power.” It has territory, resources and a sizable nuclear arsenal, for all that is worth today, but it lacks real economic strength. Unless it deals with this massive deficiency, Russia will not be able to play in the global top league. And, given the present circumstances, it will have nowhere to go other than to China. Exit Greater Europe from Lisbon to Vladivostok; enter Greater Asia from Shanghai to St. Petersburg.

For years, Vladimir Putin, a judo player, has been trying—not without success—to compensate for Russia’s deficit of economic strength with his own capacity of punching above his weight. This, however, can only go so far. As an individual statesman, he may well be the most powerful and most experienced leader in the present-day world, but the Russian Federation, which he leads, is way below that. Today, Russia, while a truly independent player (a rare quality, and Putin deserves credit for that), is not an equal of the world’s high and mighty, and thus can only wish for a co-equal relationship with them.

The idea is not to gain quantitative parity—say, in terms of GDP volumes—with America, China or Europe. This, of course, is impossible. Rather, Russia should work to advance in qualitative terms: labor productivity; science and technology power; and the general quality of life of its people. Here, Putin has a chance to elevate Russia and win respect for it, and the sanctions imposed by the West can be a godsend. Or he may blow that chance and let Russia slide even deeper.

Anti-American litanies and a Herculean—or Sisyphean—toil of getting one’s message across to a largely unsympathetic Western public will not help. What Russia needs today is a new national elite based on meritocracy and devotion to the country and its people, not proximity to a leader or membership in particular clans; it needs fair and transparent rules of the game inside the country, based on the rule of law and backed by independent courts and a professional law-enforcement apparatus, from which corruption is expunged; it needs de-monopolization of the Russian economy, with streamlining of profligate and inefficient state corporations and support for responsible private business at all levels; it needs a modern science/technology/education complex; and it needs a modern administrative system accountable to the public. Without any of this, Russia will squander its resources and ultimately lose its cherished independence: to China, if not to America.

The question is, will Putin—the country’s “top nationalist,” as he has just called himself—use his immense political capital to embark on the hard path of modern nation-building or will he continue enjoying the comfort of Kremlin control, which will gradually become more and more elusive as the problems mount? And then, finally: as Vyacheslav Volodin, Putin’s chief political aide, said at Valdai, while there is Putin, there is Russia; and when there is no Putin, there will be no Russia, either. A dire and timely warning. Thank you, Mr. Volodin. One should hope that your boss understands the implications.