Russia's Hand Is Visible Everywhere in the Middle East 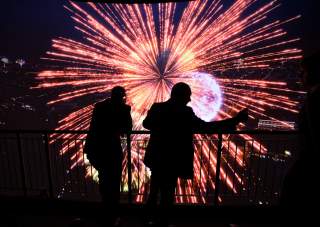 Four years ago, my colleagues Tom Nichols and John Schindler warned that U.S. fecklessness in the Middle East was creating conditions where Russia would be able to emerge as the key player in regional security. In responding to critics of their original article, they penned a follow-up days later that laid out the Russian strategy: to present Moscow as a “viable alternative partner” for the states of the region. At the time, they were roundly criticized for their apparent pessimistic assessment that a collapsing “regional power” would be able to diminish the influence of the world’s sole remaining superpower in the Middle East or even that Moscow would have anything it could offer to compete with Washington’s largesse.

Yet events since then have validated their assessments. The Russian hand is visible everywhere in the Middle East. Moscow is presiding over the effort to tap down the Syrian civil war and establish the deconfliction zones between the various factions and their outside patrons. Russia has inserted itself into the volatile Kurdish issue—both with regards to any Kurdish zone in Syria vis-a-vis Turkey and the efforts to clarify a final status between Iraqi Kurdistan and the government in Baghdad. Russia has played a major role in sustaining the Iran-Iraq-Syria “Shi’a Crescent” but also is involved in direct talks with Saudi Arabia and the Gulf emirates on how to maintain a fragile balance of power in the region. Egypt and Israel both now have their own lines of communication with the Kremlin and see Vladimir Putin as a more reliable statesman who does what he says and follows through on his commitments. This assessment is also apparently shared by Turkish president Recep Tayyip Erdogan, who seems prepared to forge a new strategic axis with Russia on energy, Eurasian security and the future alignment of the Middle East. Moscow has hosted meetings of the various Libyan factions, Palestinian political parties, Kurdish representatives and members of the Syrian opposition, and Middle Eastern leaders regularly make the journey to Moscow to confer with the Kremlin.

Russia, by all appearances, is “back.” The mistake, however, is to view these developments in light of the Cold War experience. While it would seem to go without saying, contemporary Russia is not the Soviet Union. The Kremlin is no longer interested in spreading a particular ideology nor does it seek to impose any sort of binary choice on countries in the region to “choose” between Moscow and Washington. This is because Russia is not interested in footing immense bills for security and economic assistance. Instead, the twenty-first century Russian approach is not to displace the United States, which continues to bankroll much of the costs of regional security, but instead to act as the “hedge bet” for the regimes of the region to balance against America’s preferences and to have options to escape America’s conditionality. The Kremlin offers itself as a more reliable mediator than Washington and proffers equipment and capabilities that Washington is reluctant to provide. In turn, this makes former Cold War adversaries in the region—especially Turkey, Egypt, Saudi Arabia and Israel—more open to developing a new relationship with the Kremlin.

Russia has been able to reestablish its presence because every country in the region, after two decades of U.S. transformational efforts, is now more interested in stability. It is clear that Washington lacks the ability to follow-through on its grandiose promises, and in particular no U.S. presidential administration is now in a position to commit large amounts of U.S. personnel or resources. This has been evident in the manic search by the United States for nonexistent proxies—committed secular democrats who nonetheless are prepared to fight with the same fervor and sense of sacrifice as militant jihadis—to sustain U.S. efforts in the region. The only group that has come closest to fitting the bill have been the Kurds, but whose commitment wanes outside traditionally ethnically Kurdish regions, while creating new complications in the U.S. relationships with governments in Ankara and Baghdad.

The Russian approach has been to recognize that, at present, long-term solutions are not possible, so Moscow’s efforts are instead focused on jury-rigging a series of compromises: the deconfliction zones in Syria; attempting to square the circle of de facto Kurdish self-government in Syria with a Turkish security zone; maintaining a balance between Sunni and Shia interests in Syria and elsewhere in the region; guaranteeing Iran’s ability to reach its Hezbollah proxies in Lebanon with allowing Israel to enforce its red lines. In essence, Russia offers a nineteenth century vision of spheres of influence and balances of power—with Moscow as the essential outside negotiating partner—in place of an easily distracted Washington who preaches a twenty-first century vision that is not linked to any actual commitment of resources.

Putin enjoys the limelight of being seen as a global statesman and the position of near-peer equality with the United States. However, it would be a mistake to assume that Russian efforts are being driven solely by the prestige demands of being seen as a great power. Moscow also expects to reap tangible benefits from its policies. Beyond validating Russia as a global power, the Russian calculation is that a return to playing a more active role in Middle Eastern affairs can create demand for Russian goods and services, starting with arms and nuclear power plants, and particularly technologies that the United States does not want to provide. The Middle East is critical to Russia’s geo-economic strategy: Turkey is set to become Russia’s replacement for Ukraine as a transit country for energy shipments to Europe, while Russian investments in Iraq and Libya are designed to further Russia’s ability to supply Europe with oil. Meanwhile, Russia wants to create a new north-south route that will connect the Russian heartland with the Persian Gulf and Indian Ocean.

Most significantly, Russia has used its new-found influence in the region to thwart the U.S. effort to use Saudi Arabia as a pressure point against the Russian economy. Now, instead of competing against Moscow, Riyadh is actively coordinating with the Russians in an effort to set a stable price “floor” for energy, to help guarantee revenues for both their treasuries. In addition, given the continued uncertainties that Western sanctions create for European and U.S. financial institutions to consider lending to Russia or facilitating investment, Moscow hopes to continue the trend of securing funds from Middle Eastern sources into its economy.

Russia has been learning valuable diplomatic lessons from its activities in the Middle East over the past four years—and is now taking the first steps to apply them to East Asia, playing on the same fears among both American partners and competitors in that region of U.S. unreliability and unpredictability. We see the first steps with Chinese, Japanese and Korean meetings with Vladimir Putin over the North Korea crisis—with Russia hoping that its diplomatic efforts in this arena will generate some of the same economic benefits it hopes to reap from the Middle East.

During the Cold War, the Soviet Union attempted to compete frontally against the United States—and found itself outclassed. Today, Russia is engaged in a more subtle strategy. So far, it appears to be paying dividends.