Russia's Liberals in the Crosshairs 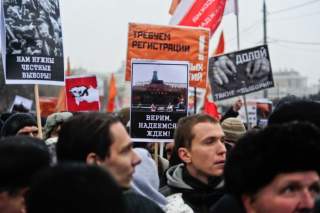 As Russia approaches parliamentary elections scheduled in September 2016, the prospects for Russia’s so-called nonsystem liberal opposition look increasingly gloomy. Not only have democratic opposition leaders failed to create a unified coalition yet again, as in essentially every previous election—a failure that will likely diminish their already limited chances to win seats in Russia’s federal and regional parliaments—but they also increasingly suffer from persecution and attacks by pro-Kremlin groups.

On Tuesday, Russian opposition leader Alexei Navalny and his anti-corruption activists were attacked, thrown to the ground and beaten by a group of men at an airport in the southern Russian resort Anapa while returning from a camping retreat. Several weeks ago in late April, pro-Kremlin activists attacked schoolboys with ammonia and disinfectants at an event organized by the human rights group Memorial. One of the participants, acclaimed Russian novelist Lyudmila Ulitskaya, was sprayed in the face with a green disinfectant. In February 2016, one of the leaders of Russia’s opposition, Mikhail Kasyanov, was assaulted in a Moscow restaurant when a group of men burst in, threatened to kill him and threw cake in his face. In general, the attacks on the nonsystem opposition have been on the rise recently: the opposition members have been assaulted with cakes, eggs, caustic liquids and fists. Russian state TV channels repeatedly broadcast programs “exposing” opposition leaders as paid agents of the West or showing them engaging in intimate sexual relations. Some assaults are more extreme last winter another opposition leader, Boris Nemtsov, was shot and killed in front of the Kremlin.

What explains the recent escalation of the attacks against Russia’s opposition? Leonid Volkov, Alexei Navalny's longtime campaign manager, argues that things have simply spiraled out of control. “Initially regional authorities instructed their militant groups to ‘teach the opposition a lesson,’ albeit the specific meaning of that ‘lesson’ was to be determined by the executives. At first they would organize antiopposition pickets with obscene content. Then they switched to attacking us with disinfectants. Now it has become fashionable to beat us. The perpetrators are simply following these trends: if they beat us in one region and were not prosecuted, such beatings will now become a trend in all of the Russian regions.” Available cross-country studies of nonfree regimes confirm Volkov's observation: levels of state repression tend to be self-reinforcing—hence, once the state begins, the repression usually doesn't stop. It gets worse.

However, other observers connect the intensification of the anti-opposition attacks to the upcoming elections. Russia’s authorities continue to enjoy seemingly sky-high approval ratings, but such numbers may be more related to the absence of alternatives rather than the genuine support for the Kremlin, and hence may not be reliable. Visible concerns by Kremlin officials about their legitimacy confirm the above observations. Their concerns manifest in different ways: passing increasingly prohibitive antiextremism and antiterrorism laws, launching a new National Guard structure in an attempt to centralize security enforcement, and consistently offering to strengthen the hold on enemies of the state, i.e., “foreign agents,” or the “fifth column.” In the period of 2011–15, the number of Russians accused of “extremism” has tripled, including people receiving prison sentences for liking or sharing Facebook posts.

The Kremlin’s concerns about its popularity are directly linked to Russia’s continuously worsening economic situation. The combined effect of collapsing oil prices, international sanctions that cut off Russian business from Western credits and a lack of long-awaited economic reforms have resulted in a prolong period of the country’s economic recession. The IMF report this week forecasts negative growth for Russia’s economy by an additional 1.5 percent this year due to the combination of these factors. Meanwhile, the propensity to protest in Russia is increasing: in 2015 the number of protests (mostly economic in nature) increased by 40 percent compared to 2014. The economic frustration has already been giving an electoral boost to the system opposition parties, including the Communist Party. If stagnation continues, the frustration might empower the nonsystem opposition (led by the aforementioned Navalny or Kasyanov) as well.

But along with tactical electoral considerations, the intensifying and demonstrative nature of the recent attacks on the opposition might also signal a new development in the state’s approach towards sustaining its own legitimacy. Over the sixteen years of Putin’s rule, the sources of domestic regime legitimacy have changed. Initially, regime popularity was sustained through continuous economic growth and redistribution to large shares of the population. However, the populist nature of such a model prevented economic reforms necessary for ensuring continuous growth. The decline of this model of legitimacy coincided with Russia’s political reorientation towards stronger militarization, aggression abroad and increasingly more belligerent propaganda on state TV channels. As Holmes and Krastev point out, the 2011–12 street demonstrations in Moscow revealed that the old legitimacy formula was destroyed. Putin’s return to presidency in spring 2012 coincided with an agitated search for a substitute legitimacy formula, leading directly to Crimea's annexation and a proxy war in Ukraine. After the international aggression in Georgia, Ukraine and Syria, the perception of Russia’s restored geopolitical image as a “strong power” have inflated the regime’s ratings to historical heights providing it with a needed legitimacy boost. Hence, the international interventionist agenda replaced the economic one.

Yet, the short, victorious war is not a long-term strategy. Russia’s aggression abroad could only be sustained under very high oil prices. As I have shown elsewhere, Russia’s behavior on the international stage is generally one of a typical petrostate. When oil prices peak, Russia tends to get more aggressive; but when oil prices are low it tends to avoid military escalation. High oil prices are required for military expansionism—first of all, because victorious international adventures are generally expensive, and second, because some budget resources are still required to ensure certain levels of redistribution to constituents. The Kremlin’s reduced resources due to decreased oil prices have already diminished its adventurism abroad, and hence limited its capacity to use geopolitics for an electoral boost. The Kremlin’s international adventurism is also constrained by the increasing necessity to lift the international sanctions that would have provided a long-awaited investment to boost Russia’s economy.

Where will the Kremlin search for a new source of legitimacy now? Likely within (rather than outside of) the country. Along with continuously aggressive rhetoric on TV channels, labeling the opposition as foreign puppets will have prepared Russia’s public opinion in favor of increasing persecution of “traitors.” The opposition will likely be blamed for Russia’s economic and international problems. Boosting popular support by scapegoating the “traitors of the fatherland” is a very natural choice under current conditions, and provides a relief for the societal aggression accumulating in light of deepening frustration. According to Levada polls, in November 2015 41 percent of Russians supported the Kremlin’s fight against the “foreign agents” and the “fifth column” (up by 5 percent from June 2014). According to sociologists, the antiopposition message is particularly well absorbed by residents of villages or small towns with traditionally more conservative and pro-Soviet views, areas that also constitute one of the largest segments of Putin’s support.

Some recent official statements by Russia's political leaders point in that direction. This January, Chechen leader Ramzan Kadyrov suggested that Putin's opponents should be labeled as “enemies of the people,” and argued they were using Russia’s economic downturn to undermine political stability. While Kadyrov is known for his eccentric statements, the reaction of Dmitry Peskov, Putin's spokesman, was equally telling. Peskov specified that the Chechen leader was referencing Russia's nonsystem opposition—an opposition that is located “outside of the legitimate political field of the country” and “does not act by the law, and ready to break it while often harming the country.” Those people do not contribute to the stability and prosperity of our country to say the least, Peskov added. After such statements by the leadership, should one be surprised that the attacks on the opposition are on the rise?

One should also pay attention to the increasing number of the pro-Kremlin militant groups spreading in Russian society. The ex-fighters returning from the war in Ukraine need a new occupation to practice their military skills. New militant structures are launched by pro-Kremlin deputies (such as Evgeny Fedorov’s National Liberation Movement, NOD) and even by Russian Orthodox priests (such as Vsevolod Chaplin’s “God’s Will”). These groups typically do not acknowledge their connection to the Kremlin, yet the lack of police engagement during their violent attacks against the liberal opposition suggest that their actions are at least indirectly encouraged by the Russian authorities. To a large extent these militant groups are direct heirs of the pro-Putin youth groups such as Nashi (“Ours”) and Molodaya Gvardiya (“Young Guard”) that proliferated in the 2000s with the direct assistance of the presidential administration and typically engaged in less violent antiopposition protests. This is the spiral of repressions that Volkov mentioned.

Although direct comparisons with China’s Red Guards or Germany’s Hitlerjugend may seem a stretch, chasing the opposition for legitimacy purposes is hardly an innovative approach. Emilio Gentile describes Italian fascists “adopting measures of discrimination and persecution against those considered to be outside this community either as enemies of the regime or members of races considered to be inferior or otherwise dangerous for the integrity of the nation” used for similar purposes. Time will tell how successful and long-term this approach will prove to be. Yet, unfortunately for Russia’s nonsystem opposition, its prosecution is unlikely to stop after the September parliamentary elections. Deepening Russia’s self-isolation and worsening economic conditions are likely to make the hunt for enemies even fiercer.