Russia's Massive Military Modernization Might Be in Big Trouble 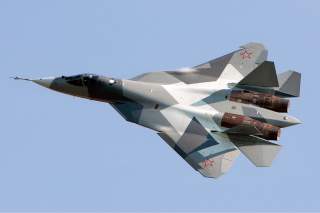 Most of the attention on Russia's ambitious plans to overhaul its armed forces has focused on questions of procurement—what new systems and capabilities the military has on its wish list. Russian president Vladimir Putin recently reaffirmed his commitment to the ambitious modernization program that he has put into place since returning to the presidency in 2012. However, the expected slowdown of the Russian economy (partly due to Western sanctions, partly due to a nearly 30 percent decline in the price of oil since the summer) will force the Kremlin to spend its defense rubles more wisely. Throwing large volumes of cash at the problem is no longer an option. Equipment certainly is important, but an examination of the specific trees—whether a fifth-generation fighter will be in service, a new class of nuclear ballistic missiles deployed, or focusing on the specifications of a next generation of armored vehicles, and so on—can miss the larger forest, principally the question as to whether Russia can in fact sustain the burdens of a twenty-first-century defense establishment.

(You May Also Like: The Russian Air Force's Secret Weapon)

President Vladimir Putin, Defense Minister Sergei Shoigu, Finance Minister Anton Siluanov and the deputy prime minister in charge of the military-industrial complex, Dmitry Rogozin, will have to wrestle with this question. Here are the three main challenges they will have to face.

France's decision to suspend delivery of the Mistral helicopter carriers highlights the first challenge: preventing Russia's isolation from global markets, especially in terms of buying capabilities and platforms that Russia cannot currently source from domestic industries. Defense cooperation with Italian and German firms is also imperiled as calls for NATO members to restrict their defense cooperation with Moscow take root. Moreover, even with the events of the past year, the Russian military continues to depend on components produced by Ukrainian firms to equip itself. Although a Ukrainian government decree banning sales of military equipment for use in the Russian Armed Forces has been haphazardly enforced—with reports that some companies have sought to flout the rules by exporting to middleman firms who then resell items for Russian military use or by taking advantage of the legal loophole of selling components to Belarus—Ukraine is not likely to be a stable source of supply in the future. In a number of hi-tech areas, notably unmanned systems and electronic suites for effective command and control, Russia has turned to partners like Israel who are global leaders in this area. Yet Israeli sources have acknowledged that, under pressure from the United States, Israel has foregone additional contracts by limiting what it is prepared to sell to the Russian military. Even India—Russia's long-time defense partner, where joint collaboration has led to impressive results like the supersonic BrahMos cruise missile—is now considering whether it might be more advantageous to forge closer links with the U.S. defense industry. Other rising powers—Brazil and South Africa among them—may be interested in closer ties with the Russian defense complex. But while these countries may be able to help finance major, new arms deals, they are not particularly in a strong position to supply advanced components as part of any joint development project.

(You May Like: 5 Russian Weapons of War NATO Should Fear)

Recognizing this problem, Rogozin has been consistently calling for Russia to strengthen its domestic capabilities and to diminish its dependence on international sources of supply, particularly for high-technology components (a call that has been mirrored by the energy industry, which sees ambitious plans for developing the Russian Arctic and nontraditional sources of hydrocarbons imperiled by sanctions prohibiting Western firms from transferring the needed technology for use in the Russian market). In his opinion, Russia's reserves, built up from the export of energy, should be used to jump-start the reindustrialization of Russia. The challenge here, however, is whether the Kremlin is capable of acting as an effective angel investor, rather than simply funneling large amounts of money that will end up wasted or diverted.

It will be of particular importance for the Russians to avoid the mistake of the Soviet past, where defense spending was not allowed to spill over into the civilian sector in terms of producing goods and services for a wider civilian market, and where military investment primed the pump for overall economic growth. A major test will be the plans to pump some $28 billion into Russia's aerospace industry over the next decade. This investment can pave the way for mass production of next-generation fighters like the PAK-FA—a platform that will be critical for Russian efforts to maintain a robust air defense and which may prove to be attractive to clients willing to pay top ruble in other parts of the world—but beyond revamping the complexes which produce aircraft and helicopters for military use, the challenge will be to see whether Russia, on its own or in partnership with China, can capture a larger portion of the global market for passenger and cargo planes and civilian helicopters. Similar challenges exist in the shipbuilding and truck manufacturing sectors, for firms to be making products both for defense needs, as well as meeting civilian demand and finding export markets. It is not enough to rely on large handouts from the state budget; the end result has to be the creation of robust defense firms that are sufficiently capitalized to retain a skilled workforce and with the ability to sustain robust research and development sectors.

The Skolkovo initiative may have stalled, but part and parcel of Russia’s reindustrialization must be the cultivation of regions in the country that promote innovation and technological development which can then be used to update and modernize Russia’s industrial base. The Soviet attempt to create Akademgorodok in the 1960s recognized the intellectual need for a relatively free environment for speculation and experimentation, but fell short of connecting academic entrepreneurship to the overall economy where it could generate growth and new products. Indeed, ambitious proposals for state-led reindustrialization will falter without also harnessing a new wave of creativity that can only come about by another set of liberalizing reforms.

The third challenge, beyond obtaining the necessary technology and recreating an industrial base to produce it, is to have a military force capable of wielding it. The historic Russian approach to military security—a large conscript force—is less critical than having a smaller but highly professional armed force. Most Russian defense experts recognize that press-ganging unwilling recruits into service does not lead to a more effective military, which is why we have seen the steady shift towards professionalization of the armed forces by promoting contract service. Current goals call for an annual recruitment of 50,000 kontraktniki with a goal by 2017 of having up to half of the standing force comprised of professional volunteers. To do this, however, pay and benefits must be increased not only to meet the recruiting goals, but also to have existing contract servicemen—particularly noncommissioned officers and junior officers—be incentivized to renew their contracts. This requires continued effort to portray military service not just as a patriotic duty to the state, but as a top-notch career choice and the path to a stable middle-class existence.

Yet at a time when the Russian government is looking for ways to cut social spending, increasing the welfare benefits associated with creating a volunteer military run up against the grain. Nor does it seem likely that Russia will follow in the path of Turkey, China or Egypt in creating military associations that become powerful shareholders in key firms (and thus provide a steady stream of benefits from dividend payments and corporate income).

These three challenges cannot be separated from the larger political and economic questions which bedevil the third term of the Putin administration. Nor can they be overcome simply by spending large amounts of money. The final verdict on the massive expenditures for the 2014 Sochi Winter Olympics—“too much spending, too little effect”—could end up being the epitaph for the military modernization program if these broader issues are not addressed.