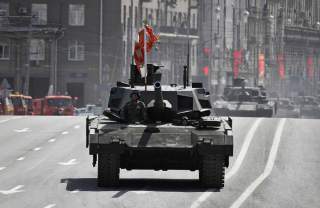 Russia has a new tank… maybe.  Several National Interest articles have followed the development of the Armata family of armored vehicles, a system that breaks with long-term Russian tradition in construction, design, and (probably) means of employment.

How much should the United States worry about the Armata, and where should that concern lie?  The impressive nature of the tank notwithstanding, the U.S. Army and U.S. Marine Corps are unlikely to encounter it directly on the battlefield.  The bigger questions involve how the Armata might change the global market for armored vehicles, and how the tank might become part of the arsenals of Russian proxies.

What it can do

The Armata represents a family of armored vehicles that share a common chassis.  As with the Israeli Merkava, this maximizes the flexibility of the platform, hopefully saving production and maintenance costs. The influence of the Merkava, which began its production life as a main battle tank but has spawned a series of spinoffs, is key to understanding what Russia is looking for in its new vehicle.

The main battle tank configuration of the Armata has several strong points. It has a modern armor system, an unmanned turret, and a crew compartment protected from the most common types of enemy fire.  The emphasis on crew protection comes, as many have noted, as part of a new Russian focus on the protection of professional soldiers.

The flexibility of the Armata frame gives it a chance on the export market.  Different customers have different needs, and the Armata has the potential to solve a lot of problems. This is particularly the case given that the Armata family is, like the Merkava it’s based on, designed to operate across the combat spectrum.  Armies needing low-intensity combat options could use the Armata in some of its configurations, while armies needing a serious, conventional main battle tank could still find much to like.

State of the Russian Tank Industry

Russia used to produce a lot of tanks, and it used to export a lot of tanks. However, it’s fair to say that the ability of contemporary Russian industry to mass produce a new tank is in some question.  Into the early 1990s, Russia mass produced a pair of main battle tanks; the T-80 and the T-90.  Fiscal pressures forced Russia to downsize to only one model in the late 1990s.

The breakdown of an Armata during the rehearsal for the 70th Victory Day parade probably says more about the political needs of the Putin administration than about either the soundness of the platform or the quality of the workmanship.  However, although the T-90 has a decent reputation for reliability, there are solid grounds for concern about the Armata.

Russia’s military-industrial workforce continues to age, and the defense industry has struggled to bring new human capital into the fold. The dependence of the Russian economy on energy exports exacerbates the problem, making other industries unattractive to talented workers and engineers.  While Russia still enjoys a great deal of success in the arms export market, this success has almost entirely come with upgraded legacy designs.

Moreover, the things that make the Armata interesting also make it dangerous, from a Russian point of view.  Unlike the T-80 and the T-90, both of which borrowed significantly from the T-72, the Armata includes major design features that Russian industry has never produced before.

Russia has plenty of time to work out these problems, but if problems develop with the Armata, then it could begin to look like the PAK FA.  A year ago, the PAK FA looked like the most dangerous fighter in the world, tougher than the F-22 and cheaper to boot.  Now, Russia is struggling to afford more than a token buy, and the Indian Air Force has grown exceedingly frustrated with production delays and shoddy construction.

Future of the Tank?

Over the past three decades, analysts have repeatedly probed the future of the tank.  As a platform, the tank lacks several key advantages that modern military organizations tend to like.  Main battle tanks are generally heavy, loud, hot, and consume a great deal of fuel.  All of these are problematic in a milieu that increasingly focuses on stealth and mobility. The days of comparing the T-72 against the M1A1 on the Central Front would appear to be over.

And yet, armies that have tanks tend to keep using them.  Tanks played (and continue to play) an important role in U.S. operations in Iraq, and NATO operations in Afghanistan.

The Russian Army has used tanks effectively in Chechnya, Georgia, and now in Ukraine.

Perhaps most importantly, the Merkava continues to have a central role in Israeli operations in Lebanon and Gaza.  All of this suggests that countries will want something like the Armata, a vehicle that can keep a crew protected while also adding enormous firepower to a task force.

The United States undoubtedly needs to think seriously about a new main battle tank, the continued dominance of the M1A2 Abrams notwithstanding.  However, it is hardly clear that the threat of the Armata provides sufficient independent justification to jumpstart that process.  The U.S. needs to worry more about replacing the Bradley than the Abrams.

Will the Armata become a major export tank? Nikolas Gvosdev suggests that Russia may become the “arsenal of autocracy,” and that the Armata could have a big impact on the international stage. Uralvagonzavod seems to agree, and has already begun hyping the prospects of sales to Egypt and various Central Asian states.

Maybe.  But Russian tank exports have had limited success on the export market since the end of the Cold War.  Apart from India, the T-90 has not become a huge export success. And India, which in addition to purchasing finished and semi-finished T-90s produced a large number of vehicles under Russian license, seems committed to moving to domestic designs for its next generation of tanks.  It’s hard to see India becoming interested in the Armata (especially its MBT variant) after all the time and trouble that the Indians have sunk into the Arjun MBT.

The People’s Republic of China has not recently produced a tank for export, but the Type 99 has capabilities similar in many ways to the T-90, and is probably cheaper.  China doesn’t appear to be working on a new armored vehicle in the Armata’s class, but this itself presents problems for Russia. The design team of the Armata has expressed concern about the possibility of Armata exports to China, on the grounds that China might reverse-engineer components and manufacture them domestically.  This would make China a fearsome competitor on the export market, rather than a potential export target.

Perhaps most importantly, the case for concern about Russia becoming the “arsenal of autocracy” runs into the troubling fact that the United States continues sell enormous amounts of weaponry to autocratic countries.  There surely are countries where Russia enjoys a competitive advantage over the United States by virtue of its willingness to ignore politics, but the number has narrowed as the U.S. has adopted a more flexible approach to arms export.

Russia is trying to recapitalize its armored fleet at the same time that it’s trying to rebuild its air and naval forces. The ability of the Russian defense industry, not to mention the Russian defense budget, to manage this is in serious question, especially given that Russia also needs to pay for active military operations in Ukraine, and for the occupation of Crimea.  And if Russia decides to invest in absurdities like restarting the Tu-160 production line, funds for real priorities will become even scarcer.

The export prospect is quite a bit more interesting.  If Russian industry can make the Armata a cheap and reliable option, then it can offer a serious alternative to U.S. (and other Western) ground combat vehicles.  But it remains to be seen if Russia’s tank producers can manufacture the Armata effectively enough to let it reach its potential.