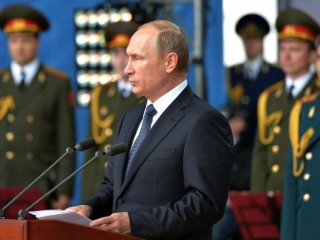 There has been much sensational media attention over Russian president Vladimir Putin’s decision to shore up Syrian president Bashar al-Assad, with hints that it could even be the start of a second Afghanistan for Russia. But there are strong incentives for Russia to fight in a limited role in Syria. The New York Times recently highlighted this, detailing how Russia under Putin has been keen on advancing its military prowess and Syria has therefore become Russia’s proving ground. In this sense, the Kremlin's military actions in Ukraine and Syria are no mistake, but rather stepping stones toward a larger strategic goal.

Besides the obvious reasons—supporting an ally who secures regional interests and landing an embarrassing blow to the Obama administration’s Middle East policy—Russia’s military is continuing its march toward professionalization. Putin has been showcasing the advances made by his country’s military through the use of precision strikes and cruise missile attacks, even launching one from a submarine this week. The testing and refining of new weapons systems is enabling air crews, professional soldiers and Special Forces to gain valuable combat experience.

Sanctions, economic blowback and Western ire aside, the Russians have been able to significantly close the gap with other modern militaries. The myth that Russia will be leveling cities in Syria needs to be left behind, as Putin and his regime are keen on creating the image of a modern, technologically advanced military. There is evidence that the intervention in Syria will be rather limited. Michael Kofman has observed a creeping involvement in Ukraine, as part of a Russian strategy in which the calculus of force has been very cautious and aimed at minimal loss of Russian military personnel. To this end, Russian military units were only directly involved when separatist forces were starting to suffer setbacks. Russia has only moved to bolster Assad’s regime after the Syrian Army suffered losses at the hands of rebels over the course of four years.

As the situation stands now, Russian investment in Syria, at least militarily, is rather scant. The goal of the Russian Federation is not to take large parts of Syria itself, but to provide support, predominately through airstrikes, to the Assad regime and its military. There appears to be approximately one battalion of Russian ground units, which could take part in limited offensive roles, but now seem mainly devoted to protecting Russian air assets. There is talk of injecting Russian “volunteers” into the conflict, who have already gained battlefield experience in Ukraine. These troops would most likely be used to augment Syrian army units and are minimally problematic for Russia, as they are not part of the army—at least not officially.

The well-known Special Forces divisions of the Russian military will be seeing action in Syria as well. While most of the forces being sent will either be restricted to defending airbases or Assad’s strongholds against rebel advances, Spetsnaz teams are being sent for more offensive purposes. Indeed, as the intervention in Syria will likely fan the flames of Sunni radicalism within Russia, it would be advantageous to try to nip the problem in the bud before it spills back into the heartland. Additionally, gaining more combat experience against radical Islamic forces would prove useful for any flare-ups of violence in the restive Caucasus republics.

Though Russia’s material involvement in Syria is minimal, Syria provides an opportune proving ground for training Russian armed forces and coordinating actual battlefield actions. Russia has conducted military drills with upwards of 90,000 soldiers, which makes Western exercises seem limited in comparison. However, drills are just drills: they show that Russia is able to muster significant amounts of troops quickly, but do not reveal how effective these forces might actually be in combat. Fighting in Syria now enables Russian pilots to conduct actual sorties against targets, gaining real-world experience while also supporting a strategic ally in the region. Additionally, the Russian military is now able to test its missiles’ combat effectiveness, as was seen in the recent strikes originating from the Caspian Sea. These tests of new technology and coordination between different branches of its Armed Forces allow Russia to practice flexing its military muscle in the real world, and not be limited to snap drills.

As seen with the Caspian missile strikes, one of the more telling signs of Russia’s continued military modernization is the appearance of more precision-guided munitions. Although they lack a number at all comparable to the U.S. arsenal, Russian forces have been using them with increasing frequency. The conflict in Syria gives Russia leeway to test its precision munitions in real-world conditions, and with fewer repercussions if used in other theaters of conflict (like Ukraine). There is still a great number of unguided bombs in use by the Russian military, and they will most likely cause significant damage to unintended targets, as pointed out by U.S. Air Force intelligence. Despite hiccups, and reported errors with some of Russia’s cruise missiles, these are all worrying developments for Western planners. Russia is now much more militarily savvy in its use of advanced missile and air systems, and is able to refine their use through foreign intervention.

The Syrian intervention could come back to haunt Putin, since there are many domestic problems brewing in Russia. It could prove quite pointless and costly, without any tangible results. This is further compounded by the growing blowback against Russia following Turkey’s downing of a Su-24 Fencer. However, Russia is seeing results in the professionalization of its armed forces by fighting in Syria. Its air force is gaining experience through conducting sorties, while Special Forces and irregular volunteers are seeing action. Coordination between these forces will likely improve, as Moscow used its previous military conflicts to win valuable lessons and will probably do the same now.

All in all, the conflict is revealing that, at least in the short term, Russia is closing the gap in military technology and experience with the West.

Blake Franko is a researcher on geo-strategic issues in Russia, Eastern Europe and Eurasia.