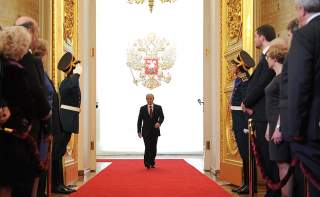 Last month, the New York Times reported that Russia had secretly deployed two battalions of ground-launched cruise missiles in violation of the Intermediate-Range Nuclear Forces Treaty (INF Treaty). In the wake of this revelation, much has been written about the future of the INF Treaty, and how the United States should respond militarily and diplomatically to Russia’s violation.

We must understand that Moscow will continue to cheat on the INF Treaty, so it is important to explore the root causes of Russian misbehavior. Russian president Vladimir Putin has decided to disregard the INF Treaty due to China’s growing military strength and Russia’s own military doctrine. Furthermore, Russia violating the treaty helps Putin fulfill his long-term goal of weakening NATO.

The INF Treaty, signed in 1987 by the United States and the Soviet Union, bans ground-launched missiles with a range capability between 500 kilometers and 5,500 kilometers. But over the last decade, Russia has made it clear that it perceives the INF Treaty to be an unfair deal. Moscow’s primary argument is that the treaty is flawed because it has only been signed by the United States and Russia, thus, Russia’s other strategic rivals, namely China, are not constrained by the INF Treaty’s limitations on missile technology. Consequently, China has made considerable investments in intermediate-range missiles.

Russia believes the Chinese missile battalions that threaten U.S. bases in East Asia could easily be used against targets in eastern Russia. Moscow-Beijing relations may be warmer than those between Moscow and Washington, but contemporary Sino-Russian history is littered with long and bloody conflicts. Only in 2005 did the two neighbors resolve a border dispute in outer Manchuria that claimed hundreds of lives during the Cold War.

Further, an analysis of Russian military doctrine suggests that its military considers cruise missiles game-changing tools of modern warfare. Accordingly, Moscow seeks to develop asymmetric nuclear capabilities. Ground-launched cruise missiles are difficult to monitor, can be armed with nuclear weapons and evade Western missile defense. Russia has studied the U.S. military’s successful use of missile technology in Iraq, Afghanistan and Kosovo, and seeks to replicate those successes.

In the European theater, Russia’s deployment of new cruise missiles exacerbates political discord within NATO. The Kremlin recognizes that nuclear saber-rattling puts European leaders under domestic political pressure. Putin has calculated that raising the specter of nuclear Armageddon will force NATO to avoid military countermeasures that are perceived as provoking Russia, thus weakening the alliance. Russia will almost certainly couple aggressive nuclear posturing with Russian propaganda efforts that exploit political tensions within NATO by reinforcing the notion that confronting Russia will lead to a nuclear holocaust. If Russia deploys these weapons in range of NATO bases in Europe, it will undercut the nuclear balance between Russia and NATO, undermine the concept of an assured second strike and make it difficult for leaders to manage escalation dynamics.

As such, Russia has signaled a willingness to remilitarize Europe. In the event of a military crisis, Russia could use its weapons as a bargaining chip to force NATO to back down from challenging Russian aggression. Most notably, Germany has opposed the remilitarization of Europe and pushed for its denuclearization. It is difficult to imagine German leaders supporting a more robust nuclear posture in central Europe, such as increasing NATO’s nuclear arsenal or deploying nuclear weapons in eastern Europe, as a response to Russian aggression.

In the long term, Putin has likely calculated that weakening NATO’s deterrence posture provides greater benefits than any punitive damage incurred from violating the INF Treaty. As U.S. policymakers develop a response, they should understand what has driven Moscow to develop and deploy these missiles: China’s growing military power, Putin’s desire to exploit political divisions in NATO and Russia’s military doctrine. Therefore, we must develop a policy that reduces the incentives that have pushed Moscow to violate the INF Treaty.

William McHenry is a Researcher at the Center for a New American Security.