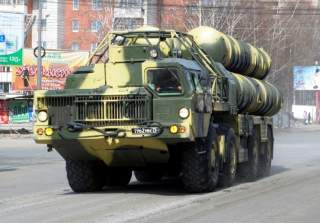 President Putin’s decision to lift the ban on the transfer of the S-300 air defense system to Iran signals a new departure for Moscow’s policy in the Middle East. Coming soon after the interim agreement between the P5+1 powers and Iran, the Kremlin’s decision does away with the only sanctions measure Moscow unilaterally imposed on Tehran in 2010, in an effort to bring it to the negotiations table. It is also the first fruit collected by the Iranians from the Lausanne accord. Thus, Russia has rewarded Iran for its willingness to do a deal with the international community over its nuclear program. Negotiations with Iran, of course, will continue ahead and possibly beyond the June 30 deadline, but Moscow’s message is clear: should the talks fail, Russia will not support new sanctions against Iran.

In the event, however, that existing sanctions are eased and lifted, Russia will have strengthened its position as an arms supplier to one of the leading regional powers in the Middle East. Even if Iranian-Western trade suddenly blossoms again, it will probably not include arms and military equipment. There, Russia will try to fill the void. Strategic competition between Shia Iran and Sunni Saudi Arabia has been intensifying recently in the Gulf, the Levant and the Arabian Peninsula, and Iran appears a particularly lucrative customer for the Russian defense industry—particularly as the Arab states rely on Western, mostly American arms imports. Nuclear energy and arms are the two niches that Russia clearly prioritizes in its economic relations with Iran.

In the post-Ukraine geopolitical environment, however, economic gains are not the only advantage that Russia is seeking in its relations with Iran. With its relations with both the United States and the European Union under severe strain, the Russian leadership has redefined its country as a non-Western power in search of a new openings, and a new world order. Toward that goal, Russia has been expanding and deepening connections with major countries such as Iran. Once the UN sanctions are lifted, the Russians will be actively promoting Iran’s membership in the Shanghai Cooperation Organization.

The Kremlin’s decision on the S-300, of course, has irritated Washington. The Russians, for their part, claim that provision of a defensive weapons system does not undermine the interim accord and the chances of a final settlement. Indeed, the weapons to be delivered would not be able to protect Iran against a U.S. strike, should it be launched. Informally, the Russians are telling the Americans that they cannot expect their concessions from the era of post–Cold War cooperation to be automatically transferred into the present era of confrontation. Against all fears, Russia so far has been playing ball within the P5+1, because it was also in Moscow’s interest to avoid a nuclear Iran or a U.S. attack against Iran. The S-300, however, is a different matter, for all the reasons explained above.

Perhaps more importantly, Putin’s decision risks straining Russia’s relations with Israel. Yet, Moscow-Jerusalem differences over Iran have persisted for a long time. The Russians usually consider Israeli worries overblown, and the Israelis believe the Russians are complacent, or worse. Of course, Russia would want to keep its generally good relations with Israel intact. However, the deepening conflict with the United States has already impacted adversely on the links between Russia and a number of U.S. allies in Europe and Asia. Moscow may have concluded that when push comes to shove, all U.S. allies, including Israel, will follow Washington’s lead in its Russia policy.

(Recommended: 5 Best Bombers of All Time)

Since the start of the war in Syria, Russia has gained a number of vocal critics among Arab countries, mainly in the Gulf. Moscow’s support for Bashar al-Assad contrasts with the support given by Saudi Arabia, Qatar and others to Assad’s opponents. On the other hand, Iran has been Russia’s de facto ally in Syria; it has been active in opposing Islamic State in Iraq, which Russia sees as clear and present danger; and it is seen as a positive force in Afghanistan, which is entering a delicate phase in its evolution. Recently, Moscow has also voiced objections against the Saudi-led—and U.S.-blessed—military intervention in Yemen against the Iran-friendly Houthi tribesmen. All this falls short of a Russo-Iranian alliance in the region, but Moscow’s and Tehran’s interests on a number of important issues run in parallel.

Five years ago, one could safely say that Russia had no interests in the Middle East, save some commercial ties, old arms relationships with surviving Cold War–era regimes and beaches for Russian tourists. Since then, the picture has dramatically changed. Syria has become a symbol of Russian reentry into the Middle East; Egypt, of Moscow’s hope for rekindling some old ties; and Turkey, of a new type of energy relations with the European Union. It is Iran, however, that can give Russia’s Middle East policy a strategic depth—if only the Kremlin were able to devise a strategy that would benefit Russia, rather than entangle it in a web of increasingly complicated regional rivalries.