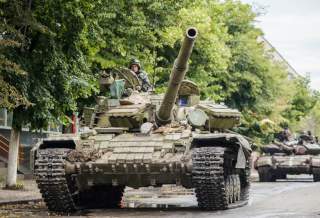 “Russia is winning” the Ukraine crisis, or so goes the conventional account. This claim has elements of truth to it—narrowly conceived, Russia has gained much in the last year. President Putin has boldly returned control of the Crimean peninsula to Russia. He has crippled Ukraine through a new “hybrid warfare” that the West seems unable to counter. Moscow has demonstrated its resolve and resilience in the face of Western sanctions, even as President Putin has watched his domestic approval ratings skyrocket. And the Kremlin has reminded the world that Russia is determined to control its neighborhood, and that it remains a great power worthy of respect.

But Putin’s short-term victories should not blind Western policymakers to the significant costs that Russia has racked up. In particular, through its annexation of Crimea and subsequent policies, Moscow has ensured that Ukraine will no longer act as a buffer state and will instead gravitate to the West for the foreseeable future. What’s more, Russia’s security situation has continued to deteriorate amidst a series of missteps and predictable backlashes from the international community. And worst of all, the Kremlin cannot reverse its error and must instead rely on additional, costly policies in order to mitigate the fallout from its initial mistake.

From the end of the Cold War until early 2014, Ukraine acted as the quintessential buffer state. Both Russia and the West wanted to integrate the country into their respective spheres of influence, but Kiev remained independent and largely neutral.

Ukraine’s demographic make-up offers at least a partial explanation. Samuel Huntington dubbed Ukraine a “cleft country” based on its relatively even divide between pro-Western voters in the west and pro-Russian voters in the east. Indeed, this east-west divide had characterized every presidential election since the country’s independence, and it explained why control of Kiev oscillated back and forth between pro-Russian and pro-Western leaders. Thus, in 1999 and 2004, the western oblasts took Kiev, while the eastern oblasts won in 1991, 1994, and 2010.

Most importantly, the swing of the electoral pendulum was bounded. So long as Ukraine remained a democracy, there was never any serious risk that the country would become permanently ensconced in either the Western orbit or the Russian constellation. To do so would risk alienating half the country. Thus, by default, Ukraine adopted a self-correcting policy of nonalignment. Kiev would sometimes lean toward the West, and other times toward Russia, but there was always an electoral check on permanent alignment with either geopolitical pole.

To be sure, this situation was not ideal from Moscow’s perspective. Russia had to contend with occasional turbulence in its relationship with Ukraine, as well as Kiev’s sporadic moves toward the West. The Kremlin would have much preferred the strategically superior alternative of a firmly eastern-oriented Ukraine, a throwback to the days of the Warsaw Pact. But the situation was tolerable, not least because Russia obtained some measure of strategic depth against significant encroachment by NATO and the West.

(Recommended: The Bear Awakens: Russia's Military Is Back)

Then came the Maidan revolution. Moscow saw a repeat of the 2004 Orange Revolution, where pro-Russian Yanukovych had “won” a rigged presidential election, only to have the results annulled by the Ukrainian Supreme Court acting under popular pressure. In the second round of balloting, Yanukovych had gone on to lose to pro-Western candidate Viktor Yushchenko by a substantial margin, sealing Russia’s “defeat.” (Never mind that the pendulum swung back in 2010, when President Yushchenko and other pro-Western candidates lost the presidential election to a revitalized Yanukovych.) Wanting to avoid Part II of the Orange Revolution, the Kremlin saw an opportunity to reclaim the Crimean peninsula in late February 2014.

This was a mistake. By annexing Crimea, President Putin thrust what remained of Ukraine into the arms of the West for the foreseeable future. First, the annexation disrupted the country’s delicate electoral balance. Before, control of Kiev vacillated back and forth between roughly even blocs of pro-Western and pro-Russian voters. But by taking Crimea, Russia annexed not only the peninsula, but also more than a million largely pro-Russian eligible voters.

In the past, these voters had helped maintain the electoral equilibrium underlying the country’s policy of nonalignment. In 2010, for example, Yanukovych edged out the pro-Western Yulia Tymoshenko by 887,909 votes. Crimea overwhelmingly supported Yanukovych, casting 639,529 more votes for him than his rival. Without those votes, Yanukovych’s margin of victory would have been vanishingly narrow—only 92,119 votes in a country of almost 45 million. And if one had subtracted out the votes from the now separatist-controlled Luhansk and Donetsk oblasts as well, then Tymoshenko would have won with 3,299,982 more votes than her rival—almost four times her opponent’s actual margin of victory in 2010.

Ukrainian nationalism has waxed and waned over the years, but nothing unites a group of individuals as much as a perceived external threat. Moscow’s moves guaranteed that Ukraine would unite around its independent national identity and identify less and less with its imperious eastern neighbor. Polls bear witness to this increasingly virulent anti-Russian nationalism. In 2011, about 80 percent of Ukrainians had a favorable opinion of Russia, but by last summer, that statistic had plunged to a mere 35 percent. As the impasse continues, Ukrainians continue to downgrade their views of Russia, not only in the western part of the country—never that friendly to Moscow to begin with—but also in the east—the normally dependable, pro-Russian stronghold.

Ukrainian electoral politics will be driven for a long time to come by the combination of the loss of a significant pro-Russian voter bloc and this new nationalism. Kiev has moved with unprecedented speed to solidify an enduring relationship with the European Union and NATO. Prior to 2014, the Kremlin would have seen this burgeoning relationship as a strategic nightmare because of its calamitous consequences for Russia’s security dilemma. On December 23, 2014, the Ukrainian Parliament officially repealed the country’s nonaligned status, citing a litany of complaints against its overbearing eastern neighbor.

A Bear Trap of Its Own Making

Since the Crimean annexation, Russia has compounded its strategy quandary. First, it has accentuated the electoral problem by underwriting the Luhansk and Donetsk separatists. Like Moscow’s seizure of Crimea, the separatist movement saps the pro-Russian electorate of critical votes and helps guarantee a pro-Western leader in Kiev.

Second, Moscow has also kneecapped itself through a series of policies that play well on the domestic news, but seem shortsighted from a tactical perspective. For example, in response to Western sanctions, the Kremlin effectively decided to sanction itself by banning food imports from the West. This policy has aggravated Russia’s economic predicament by stoking inflation, an outcome that should have surprised no one but the descendent of a Soviet central planner.

Likewise, Russia’s economic warfare may be misfiring as well. By threatening to cut off natural gas and continuing to fuel Ukraine’s separatist conflict, Russia has sent Ukraine’s economy into free fall. Predictably, though, this state of affairs has only strengthened Ukraine’s dependence on the West. Now, President Petro Poroshenko is on the cusp of receiving a $17.5-billion loan from the IMF, which would replace a $17-billion loan announced last April. Once again, Russia’s moves are driving Ukraine into the arms of Washington and its allies.

These tactical errors have been worsened by the entirely foreseeable economic, security and diplomatic consequences of Russia’s actions.

Much has already been said about Putin’s string of economic miscalculations, but it is worth stressing the extent of the damage exacted by Western sanctions acting in conjunction with a drop in oil prices and Russia’s deeper structural problems. As Dmitri Trenin notes:

Russia’s GDP is likely to contract by 5 to 7 percent, inflation may rise to 15 to 20 percent, unemployment climb to 7 percent, and the capital flight reach $130 billion on top of $150 billion in 2014. Since last summer, the ruble has already lost nearly half its value against the major currencies.

And of course, the Russian fisc is being further strained by the enormous cost of financing the absorption and reconstruction of the Crimean “money pit.” As a result, Trenin predicts, “[t]his year promises to be the most difficult for Russia since the beginning of the new century.”

President Putin has also aggravated Russia’s security dilemma through his rash policies. For Russia’s unnerved neighbors, Moscow’s behavior has sparked an almost existential crisis. Lithuania has stated that it will reintroduce military conscription to bolster its army. Poland has announced a military modernization plan valued at 33.6 billion euros, and the Baltic states have increased military spending by an additional 1.2 billion euros as well. Meanwhile, NATO plans to establish a 5,000 strong “spearhead” force in addition to six new bases along Russia’s strategic perimeter. These steps augur the “biggest reinforcement of [NATO’s] collective defence since the end of the Cold War”—a move that, to put it lightly, does not favor Russian interests.