Russia's New Military Doctrine: Should the West Be Worried? 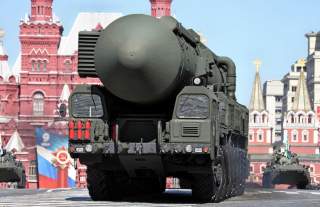 As one of his final acts of 2014, on December 26, President Vladimir Putin signed Russia’s new military doctrine. In principle, the doctrine, an official statement on national defense, is regularly updated and made public. Its previous iteration had been in place since February 2010. In the run-up to the publication of the text, there were gloomy predictions. One suggested that the United States and its NATO allies would be formally designated Russia’s likely adversaries. Another one, based on the remarks of a senior serving general, expected Russia to adopt the notion of preventive nuclear strike. Neither of these provisions found its way into the published document. The doctrine does, however, faithfully reflect the sea change that occurred in Russia’s foreign policy and security and defense postures in 2014.

Essentially, for Commander-in-Chief Putin and for his generals, admirals and security officials, war in 2014 ceased to be a risk and turned into grim reality. Russia has had to use its military forces in Ukraine, arguably the most important neighbor it has in Europe.  The conflict over Ukraine, in Moscow’s view, reflects the fundamental reality of an “intensification of global competition” and the “rivalry of value orientations and models of development.” Against the background of economic and political instability—crises and popular movements—the global balance is changing in favor of emerging power centers. In this new environment, the doctrine highlights information warfare and outside interference in Russia’s domestic politics as risks of increased importance.

The list of main external risks has not changed much, but the nuances are important. As in the past, at the top of the table are NATO-related issues: its enhanced capabilities, global reach and enlargement, which brings alliance infrastructure closer to Russia’s borders. After the risk of NATO comes the risk of destabilization of countries and regions, which can be taken to mean Libya, Syria and Ukraine, and foreign force deployments close to Russia, which presumably refers to additional NATO aircraft in the Baltic States, ballistic-missile defense (BMD) assets in Romania and naval ships in the Black Sea. The top portion of the list of risks contains references to U.S. strategic ballistic-missile defense, its Global Strike concept and strategic non-nuclear systems.

The latter two risks have attracted a lot of attention in Moscow recently, which put them on par, along with strategic BMD, as key risks to Russia’s deterrence capability, the apple of the eye of Russia’s entire defense posture. The danger is, of course, that Russian officials may exaggerate the risks and overreact—as they did once under Mikhail Gorbachev, when they fell under the spell of Ronald Reagan’s Strategic Defense Initiative (SDI), with its “brilliant pebbles” and such. As a result, much of Gorbachev’s disarmament agenda was based on the need to avert something that was not coming.

Some standard notions in the doctrine have acquired new urgency. Threats to territorial integrity and foreign claims to parts of Russia have always been there, but, with the acquisition of Crimea, Moscow must seriously consider the need to protect the peninsula against Kiev’s irredentism. Consequently, Russia has, since last summer, been turning Crimea into an area of major military deployments.

Notably, other risks, which do not directly impact on Russia, have moved down on the list. Among these risks are: the proliferation of weapons of mass destruction, missiles and missile technologies, global terrorism (potentially with the use of radioactive and toxic materials), arms and drug trafficking, armed domestic conflicts along ethnic and confessional lines and the activities of armed radicals and private military companies—a provision covering both the Islamic State and the successors to Blackwater.

The concept of what constitutes a military risk has been broadened to include the use of information and communication technologies—which may mean anything from Twitter/Facebook flash mobs, as during the Arab Spring, to cyber attacks—to achieve military-political goals. Another risk added to the doctrine is the toppling of legitimate governments and subsequent imposition of regimes inimical to Russian interests—a clear reference to Kiev’s Maidan and the overthrow of President Yanukovych.

This reference is also linked to the list of domestic military risks. First on that list are violent attempts at changing the constitutional system. During the winter of 2011-2012, the Russian authorities watched the growth of the protest movement in Moscow and across the country with increasing concern. Vladimir Putin then accused the protesters of colluding with the U.S. government. In May 2012, on the eve of Putin’s presidential inauguration, the Russian authorities reacted strongly against the protesters scuffling with police in central Moscow, and then worked effectively to degrade and stifle the radical opposition. However, the Kiev Maidan, which began in late November 2013, soon gave them an example of the successful overthrow of an entrenched regime.

The doctrine elaborates on Russia’s relationships with its allies, partners and other countries. It singles out Belarus as Moscow’s closest ally, whose armed forces are practically integrated with Russia’s. This situation explains the Kremlin’s tolerance for Belarusian president Alexander Lukashenko’s undisguised blackmail of Russia. The next category is the members of the Collective Security Treaty Organization (CSTO) of Armenia, Belarus, Kazakhstan, Kyrgyzstan, Russia and Tajikistan, which have agreed to coordinate their policies and have formed rapid-reaction forces for various contingencies—mainly in Central Asia, with a view toward countering risks coming out of Afghanistan (a cause of rising common concern). In December, Putin welcomed CSTO leaders to the new National Defense Control Center in Moscow and invited their countries to join the center. In the Caucasus, the Russian republic of Chechnya has emerged as Moscow’s security stronghold and a paramilitary resource. Also, under a treaty concluded in November, Abkhazia has merged its forces with Russia’s. South Ossetia is de facto a Russian military protectorate. This completes Russia’s defense perimeter as of late 2014.

Even though President Putin continues to make tongue-in-cheek references to the United States and its NATO allies as “partners,” the military doctrine is blunter on the issue. Only countries deemed to be friendly to Moscow are labeled partners: members of the Shanghai Cooperation Organization (China and Central Asia) and the BRICS group. Placing China in the SCO context, the doctrine proposes to “coordinate efforts to deal with military risks in the common space.” This, of course, falls far short of any form of military alliance with Beijing.

To the United States, NATO and the EU, the doctrine offers “a dialogue of equals” on European and Asia-Pacific security, arms control, countering WMD proliferation and confidence-building measures. Interestingly, it also contains language about joint missile defense, Russia’s 2010 proposal to NATO, which did not fly then. Realizing that that proposal is now absolutely dead, the doctrine vows not to allow the United States to achieve military superiority through development of BMD or strategic non-nuclear systems. For the foreseeable future, Russia should feel absolutely confident about the deterrence capabilities of its strategic nuclear forces.

Despite the public debate, the Russian doctrine makes no change to the principles of using nuclear weapons. As before, Russia will retaliate against a nuclear/WMD attack against itself and/or its allies; and it will also go nuclear if an existential threat is posed by a conventional attack.

The new iteration of Russia’s military doctrine makes it clear that even if the West is not officially an adversary, it is a powerful competitor, a bitter rival and the source of most military risks and threats. Even faced with a coming recession, upgrading defense capabilities and force readiness remain Russia’s clear priority. Russia is also strengthening integration and cooperation with its several allies and partners in Eurasia, even as military contacts with the West are downgraded to Cold War levels. A watershed has been passed.

Dmitri Trenin is the Director of the Carnegie Moscow Center, where this piece first appeared. Follow him on Twitter: @DmitriTrenin.