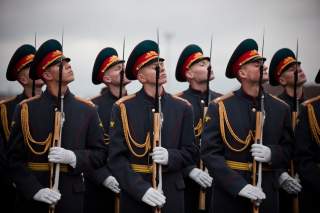 Vladimir Putin loves the topic of patriotism. In February 2016 he described Russian patriotism as “the only possible” national idea and encouraged its promotion on all levels. In 2015 Putin argued that patriotism is “the sacred duty of Russians” and “a moral guideline” for teenagers. Even in his first program article, in 1999, Putin discussed patriotism and the related issues of national pride and dignity.

In recent years, however, the topic of patriotism has also become popular in Russia’s security and military ideology, where it has been increasingly connected to Russia’s national security and the preservation of the current political system and regime. For example, a decree “On the Russian Federation’s National Security Strategy” mentions a launch of a system of “spiritual, moral and patriotic education of citizens,” among “ways of ensuring national security in the field of culture.” Russia’s 2014 Military Doctrine mentions “patriotism” three times and also recommends “patriotic education.”

So what do Russia’s patriotism and state security have in common, and why do they increasingly go together?

Patriotism—an attachment to one’s country—can be divided into two distinct types: constructive and blind patriotism. Studies show that constructive patriotism, a attachment that allows for questioning and criticism, correlates with multiple indicators of active political involvement, political efficacy, interest and knowledge. By contrast, blind patriotism, an attachment to one’s country characterized by unquestionable positive evaluation, staunch allegiance and intolerance of criticism, is found to be positively associated with political disengagement, nationalism, perceptions of foreign threats, perceived importance of symbolic behaviors and selective exposure to information favorable to one’s country. “Blind” patriots are also particularly susceptible to emotional, rhetorical and symbolic appeals from politicians. The susceptibility of “blind” patriots to emotional and symbolic slogans makes them a particularly good target of political manipulation.

“Blind” patriots have historically dominated in Russia, due to the statist orientation of its political culture and the almost complete absence of a liberal tradition. Hill and Gaddy contrast Russian and Western approaches toward the relationship between the state and individuals. In the United States, the state exists to protect the rights of its citizens. In Russia, individuals exist to defend their state (which might occasionally reciprocate, but doesn’t always have to). Russians conceptualize the state as a structure that is autonomous of the people, always comes first, and fully subordinates individuals and society to its interests.

Historically, Russia has lacked powerful independent institutions (such as the churches in Europe) to counterbalance and challenge incumbent rulers’ indiscretion. The historical dominance of the unchallenged ruler’s authority formed a narrative that couldn’t differentiate between the concepts of “country,” “political system,” “state” and “authority,” and instead mixed them together into one concept of an all-embracing State, the backbone of Russian civilization and the only guarantor of societal existence. The collapse of such an authority would hence mean a global catastrophe, the complete destruction of the social order—and even Russian civilization.

Importantly, Vladimir Putin himself shares a similar perception of the state. Hill and Gaddy list “statism” as the first and key characteristic of Putin’s personality. They point out that Putin suffers from the same failure to distinguish between the concepts of State and political regime. Putin understands the collapse of the Soviet Union primarily as the collapse of the Russian state rather than the collapse of a Communist political system. He came to power obsessed with a necessity to rebuild a strong Russian state out of the chaos of the so-called “dashing 1990s,” and still regards that as his key achievement. In his 1999 inaugural address he argued: “Russia will not soon, if ever, become a second edition of, let us say, the U.S.A. or England, where liberal values have a long historical tradition. In our country the government, its institutions and structures have always played an exclusively important role in the life of the country, the people. A strong government is for the Russian citizens not an anomaly, but, on the contrary, the source and the guarantee of order, the initiator and main force of any change.”

Russia’s incumbents themselves actively propagated such statist orientations of political culture. Rebellion and opposition to the Russian tsar were treated as the ultimate crimes—an attack against the established order—and any criticism of the state was a very serious offense or even a sign of madness. In the nineteenth century, a prominent Russian philosopher and critic of the Russian tsar, Pyotr Chaadaev, was denounced as crazy and forcefully treated for his “illness”—a tradition that later continued with the Soviet practice of incarcerating political dissidents in mental hospitals. A Soviet state, which according to its own propaganda was encircled by hostile, capitalist countries, needed a permanent mobilization of the citizenry. This was by promoting the idea of self-sacrifice for the sake of state interests. This “blind” patriotism, a cult of unquestionable obedience and sacrifice for the State, was propagated in the monuments, books and movies (especially those related to the Second World War). A sacrifice of one’s life and the lives of loved ones in the name of the State and/or victory would become perceived by Soviet citizens as a political norm. While Western films about the Second World War that put the individual ahead of state interests, such as Saving Private Ryan, would become widely popular, similar Soviet movies, such as Alexei German’s Trial on the Road, were banned from screening in the Soviet theaters.

Today Putin and other Kremlin leaders who primarily understand “patriotism” as devotion to their rule and uncritical acceptance of their policies continue this Soviet practice. Patriotism is cited in military doctrines and concepts as a way of preserving Russia’s system and political regime. “Unpatriotic” criticism of the Russian leadership is understood as an attack against the Russian state and order. For example, Mikhail Leontiev, a pro-Kremlin commentator, has written that “the only alternative to patriotism is betrayal. It can be called neutrality towards the state, or cosmopolitanism, but in fact . . . it is betrayal.”

But the Kremlin has increasingly numerous reasons to appeal to “blind” patriotism. Russia’s 2011–12 mass opposition protests, which challenged the Russian leadership, brought to power the recent escalation in the promotion of “blind” patriotism by the authorities. Putin, whose statist lenses would only allow him to view those protests as an attack against the Russian state (rather than his own regime) responded accordingly: the new Russia’s military doctrine named “informational activities undermining young Russians’ patriotic aspirations” as one of Russia’s main internal military threats.

Since Putin’s return to the presidency in 2012, state-funded promotion of “blind” patriotism has sharply intensified. In October 2012, Putin launched a special Public Projects Office as part of the presidential administration to promote the patriotic education of Russian youth. State-funded movies multiplied, praising Russia’s past greatness. State-run media imposed the uncritical acceptance of any current or previous actions by Russia’s leadership. The independent TV Rain channel, which in 2014 dared to question the decisions of the Soviet rulers during World War II, was immediately cut off from cable broadcasting. Discussion or criticism of the regime’s ideological foundations and the Kremlin’s policies increasingly became the subject of legal proceedings.

The growth of “blind” patriotism is also reflected in opinion polls. Levada Center studies show a significant increase in the number of Russians who are willing to sacrifice the welfare of the citizens for the sake of the country being “respected and feared” internationally—from 36 percent in 2004 to 47 percent in 2015.

Emphasizing “patriotism” and the importance of unconditional service for the country achieves two goals for the Kremlin. On the one hand, these slogans appeal to the historical value of the State, identified with the regime and the country. Hence any criticism of the Kremlin and its regime becomes inherently “unpatriotic,” a betrayal of one’s motherland—and a threat to national security (which justifies any tough measures of suppressing such threat). On the other hand, the Russian authorities mobilize their own support through “blind” patriotism and emotionally charged slogans. Their skyrocketing media ratings and the increasing prosecution of any dissent by the Russian public itself show that for now, such an approach works just fine.